Sushma Swaraj may have declared her intentions to not contest the Lok Sabha polls in 2019, but those who thought she is calling it quits have certainly underestimated her intentions. Notorious journalist Nidhi Razdan learnt it the hard way when she was schooled by the External Affairs Minister for a misleading tweet over the Kartarpur corridor.

It all began with PM’s decision to open the Indian side of the Kartarpur corridor that would allow Sikh devotees to visit the holy pilgrimage of Gurudwara Kartarpur Sahib, situated on the other side of the border. Welcoming the decision ‘with open arms’, Pakistan sent an invitation to the Minister of External Affairs Mrs. Sushma Swaraj for the groundbreaking ceremony. She replied to the invitation as follows:- 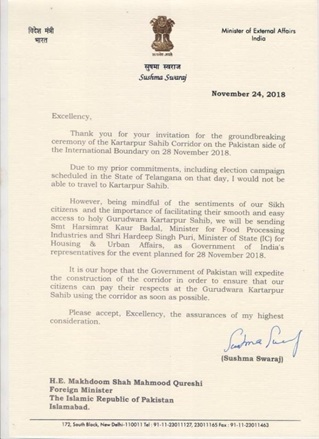 So according to the letter, even though Sushma Swaraj wouldn’t be able to attend the ceremony due to prior commitments, she would be allowing Harsimrat Kaur Badal, Minister of Food Processing Industries and Hardeep Singh Puri, Minister of State [Independent Charge] for Housing and Urban Affairs. However, that didn’t stop Nidhi Razdan from issuing the following tweets:-

Union Ministers @HarsimratBadal_ and @HardeepSPuri to travel to Pakistan next week for the groundbreaking ceremony of the Kartarpur corridor. @SushmaSwaraj declines invitation of Pakistan Foreign Minister, curing prior commitments and election campaign

In these tweets, Nidhi Razdan not only tried to convey that Sushma Swaraj had declined the invitation, but also took a sly dig at the apparent politics played by BJP government with respect to the Kartarpur corridor, in an attempt to exonerate notorious Congress politician Navjot Singh Sidhu. Hypocrisy has a new devotee in the form of Nidhi Razdan it seems.

This is not the first time that Nidhi Razdan has been accused of peddling fake news. From demonizing RSS with sly tweets, to spreading misinformation on the depreciation of rupee, Nidhi is as guilty of peddling fake news, as are her more famous counterparts like Barkha Dutt or Swati Chaturvedi. Don’t we know of her legendary hysterics over the default temperatures of air conditioners?

However, it was here that Sushma Swaraj had had it enough. In a rather caustic tweet, she schooled Nidhi Razdan for her misleading tweet over this issue:-

Please do not spread disinformation. We welcome this proposal and we are sending two Ministers to represent Government of India. https://t.co/Xiciu74ljy

Stung by this retort, and with no effective reply in her kitty, Nidhi was forced to delete her tweet, and issue the following clarification to her:-

You missed my subsequent tweet ma’am. Which had the news of the two ministers going. But you’re right, when split up ,the tweets don’t convey the news properly. So have deleted them and posted a new one.

However, it were the following tweets that lay threadbare the malicious agenda that Nidhi Razdan and her coterie of left liberal intellectuals were actually preparing against Sushma Swaraj and the NDA government:-

Can’t wait for the Opindia “expose” revealing your insidious agenda… ?

Does anyone else get the sense that Sushma Swaraj doesn’t want to be associated with the Modi Govt & it’s antics anymore? #Kartarpurcorridor https://t.co/BIPGt43dt2

Is it really ma’am? With all due respect, do you actually think PM Modi has given you your due in the last 4 and half years that you’ve served as foreign minister? Plus the back & forth on #Kartarpurcorridor by the Govt has been nothing short of ridiculous

In these tweets, while India Today journalist Seemi Pasha tried to needlessly drag the issue, and make a scapegoat of PM Modi and the NDA government, Rupa Subramanya tried to blame the right wing portals for ‘blowing the issue out of proportions.’ Long story short, the two wished to repeat the same string of events that led to NDA I’s downfall in 2004.

However, they have forgotten that this time, neither there is an absence of a watchdog like social media, nor are the people so dumb that they will lap up whatever they speak. If Nidhi Razdan learnt it the hard way from Sushma Swaraj, the two journalists mentioned in the tweets have been trolled left, right and center by the entire Twitterati for their absolutely crass and misleading comments. Times are changing, and for the better.