What a shame!! Sidhu embraces a Khalistani leader

Earlier today, Chawla posted a picture with Punjab Cabinet Minister Navjot Singh Sidhu on social media; which has raised a lot of questions. Sidhu was at Dera Baba Nanak a day prior to the inauguration of Kartarpur Corridor event and despite reaching a day early, he preferred to watch Gurudwara Kartarpur Saheb with telescope as he didn’t participate in the event.

But what he didn’t miss was the opportunity to hug General Bajwa, and on being questioned, Sidhu justified his gesture saying that it was for just ‘a second’ and it wasn’t a ‘Rafale Deal’. Also, he said, “When two Punjabis meet they hug each other, its normal practice in Punjab.”

#WATCH The hug(with Pakistan Army Chief) was for hardly a second, it was not a #RafaleDeal . When two Punjabis meet they hug each other, its normal practice in Punjab.: Navjot Sidhu in Lahore pic.twitter.com/w43CYie5GI

Gopal Singh Chawla, a pro-Khalistani, also holds the position as Chairman of The Pakistan Sikh Gurdwara Prabandhak Committee. During the inauguration ceremony of Kartarpur Corridor, he was also seen greeting General Bajwa. Reacting to this Indian Army Chief Bipin Rawat said, “Everybody talks about giving peace a chance. You see what the government said today. This (#KartarpurCorridor) is to be seen in isolation. It shouldn’t be linked to anything else.”

Aftermath of this, Pakistan Army saw itself rounded with controversy and had to come out with a justification as Major General Asif Ghafoor, Spokesperson of Pakistan Armed Forces tweeted, “Indian media taking a myopic view is selectively showing Mr. Gopal Chawla meeting COAS. Army Chief met all guests at the venue irrespective of identity. A peace initiative should not be subjected to propaganda.”

Indian media taking a myopic view is selectively showing Mr. Gopal Chawla meeting COAS. Army Chief met all guests at the venue irrespective of identity. A peace initiative should not be subjected to propaganda. @IndiaToday pic.twitter.com/NMkQ17PhKn

His name came to light during the investigations of Amritsar Blast where grenades were thrown at a Gurudwara which claimed three lives and injured 16 people. Chawla is considered to be a close aide of Lashkar-e-Taiba chief Hafiz Saeed and was seen sharing a dais with him at an event, the pictures of which later on went viral on social media. 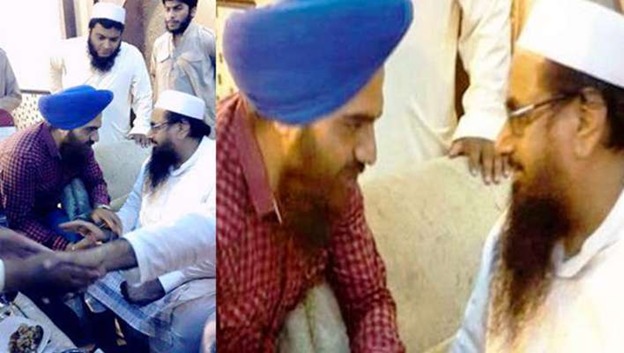 Chawla is the same guy who few days ago stopped Ranjit Singh, an Indian Diplomat from entering into Gurudwara Sacha Sauda at Lahore.

Indian Diplomat, Ranjit Singh was denied entry in Gurudwara Sacha Sauda,Pakistan by Terrorist Gopal Singh Chawla, a Khalistan Supporter & Hafiz Saeed Ally.
Who the hell is he to stop anyone entering Guru ghar?
These morons have brought shame to sikhism.
Shame.#GuruNanakJayanti pic.twitter.com/TCPoWgnr1z

In past, Chawla has vehemently spoken against India and criticized the Modi government. In one of his interview given to Pakistani media, he went on top and gave an utterly despicable statement saying, ‘ki modi India ko uss makaam pr laa rha hai, ki uski ab maut kutte ki tarah aayegi’ (Modi is bringing India to such a stage where it will die a dog’s death).

In another interview to The Republic news channel he admitted, that Pakistani Government supports him.

Soon after Sidhu joined Congress his stance underwent a radical shift. From being pro-India to pro-Pakistan Sidhu has indeed come a long way. His stance has further deteriorated as he is now giving public hugs to people who are actively involved in propagating terror on the Indian soil. Wasn’t Sidhu aware of the fact that Chawla was allegedly amongst the conspirators in the Amritsar blast? Well, it looks like he is towing his party line rather well, as leaders from his current party make it a point to add a ‘Ji‘, if and when they name a terrorist.

How can a leader of the oldest political party in the country fall so low?