The recent expose of Utsav Chakraborty, who is now accused of sending lewd photos to minor girls and sexually harassing an aspiring comedian Mahima Kukreja has triggered a spate of cases against most of the crème de la crème of the Indian entertainment society. Literature, journalism, comedy, or even singing, nothing has been spared. As more skeletons tumble out of the cupboard, Rega Jha, notorious feminist and ex editor of Buzzfeed India, tried to explain her curiously silent stance on this otherwise volatile topic.

In a long thread on Twitter, Rega Jha ranted about how #MeToo campaign is essential to the cause of feminism, and tried to deflect the arguments in the same style as her more celebrated comrades, Kunal Kamra and Swara Bhasker etc., are adept at. Her very first tweet is a classic textbook case of shifting goalposts with ease, where she indulges in cryptic philosophy of both situations as mentioned being true. Confusing, isn’t it?

I'm feeling SO much but mostly I am just grateful to the women taking on trauma, risk, and labour to bring us to this reckoning. I am in awe of you all.

This is a beautiful, overdue moment. It also fucking hurts like hell. Both things are true.

#MeToo is a minefield of novel heartbreaks.

I've theorised often: "What if my own friends are named? What will I say? What will I do?" No theorising prepares you.

A reckoning, a gut-punch: men who have been good to you have been terrible to other women.

Both things are true.

However, her third tweet laid bare the entire hypocrisy that her entire liberal brigade stands by. In the following tweet, she accepts that she was suggested by scores of Twitter users in calling out ‘her colleagues’ who indulged in such ghastly crimes, to which ‘SHE RESPONDED PRIVATELY!’ Yes, you heard that right, Rega Jha, the self proclaimed feminist, has responded to such offenders privately:-

People have asked that I call out famous male friends. That's not hard. I've done it privately for years, and these 3 days, and will keep at it. Now, the burden to speak up is theirs, not mine. I've told them to introspect, own up, apologise, make amends, take action. Fix shit.

The very first question that would come to our minds on hearing is: – WHAT? She responded privately to such offenders? Is that all? It’s a sad fact that our public memory is not very strong on such issues, or else we should’ve remembered how such logic went for a clear toss when Rega Jha led her pack in demonizing the celebrated founder of the famous Youtube channel, TVF, i.e. Arunabh Kumar, as noted below:- 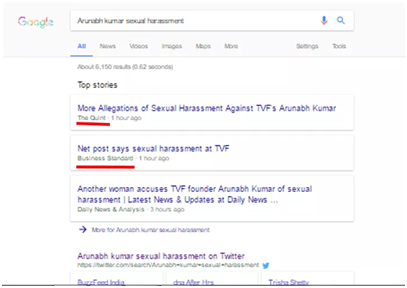 Even though they were allegations, which were never proved, Rega Jha didn’t think of this at all, as she blew the case out of proportions, not only forcing Arunabh to resign, but also destroying his entire career forever. Now when it comes to calling out the offenders from her own league, all Rega Jha has in her kitty is private bashing? Had hypocrisy been a person, she would’ve committed suicide on listening this.

Needless to say, this did not go down well at all with Twitterati, who trolled her left, right and center. The very first reply to her thread brought her entire façade of hypocrisy hurtling down, as the Twitter user by the handle Idea of India exposed her own former employees of indulging in such atrocities:-

and @RegaJha [hypocrite] remained silent then …????
BuzzFeed maintains silence even as their employee attempts to dox, stalk and threaten a woman who disagreed with him – https://t.co/r6L4EKmpGO

Equally caustic in their criticism were some other Twitter users, who roasted her for being a hypocrite when her ‘male friends’ are under the scanner, as noted below:-

What hurts like hell? Nice vocabulary you use to fight perversion, molestation, harassment or whatever. Good.

This set tweets is a turd that stinks so bad that I am screenshotting it for posterity. Right now it’s your male friends. When one of your female friends is on the other side of it – can’t wait to see what your advice will be. The next time a case of harassment arises – remember

Interestingly, neither Rega Jha is accused of such shameless deflection, nor is she the first such intellectual to resort to such hypocrisy.  We’re no strangers to Mallika Dua and Gurmehar Kaur, who shamelessly defended their accused friends, even when some of the allegations actually came out to be true. For the AIB brigade, the less said, the better. Only time will tell as to how long can these so called intellectuals get away with such hypocrisy. For now, it’s payback time.