The real reason behind the depreciation of Rupee

It is generally said that Economics is all about trade-offs. Individuals and institutions must give up something to get something and to become better off one must maximize their gains and minimize the losses. The recent sharp depreciation in rupee is all about the trade-offs. There is a concept in economics called ‘Impossible trinity’ or Mundell-Fleming trilemma. According to this concept, a central bank could not achieve an open capital account, independent monetary policy, and fixed exchange rate simultaneously. If the government opts for two of these, third is automatically closed. 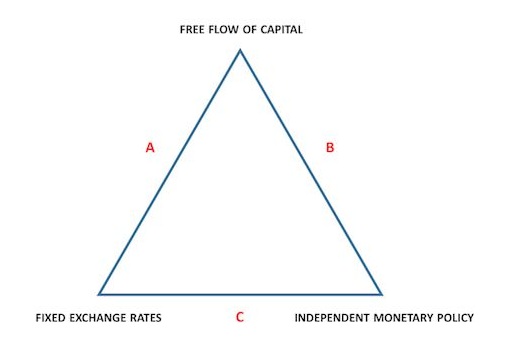 The Reserve Bank of India has a free open capital account. On the monetary policy front, we opted to target inflation under Monetary Policy Framework Agreement in 2015. The agreement gave a target to Monetary Policy Committee to keep inflation {4(+-) 2}, which means the upper limit of inflation was set up at 6 percent and lower limit at 4 percent. So, we took two options of independent monetary policy and open capital account (The capital account indicates whether a country is importing or exporting capital. Big changes in the capital account can indicate of how attractive a country is to foreign investors and can have a big impact on exchange rates). Therefore, control over exchange rates of currency automatically goes away. Now to control exchange either the central government would have to increase interest rates untimely (which would be bad for country’s market image because the goal of monetary policy committee was decided to be inflation targeting not exchange rate control) or put partial control over capital account.

When India faced the same crisis in 2013, RBI imposed partial capital control to stop the depreciation of rupee. Investment by Indian companies overseas as FDI was curtailed and remittance limit (now a large number of Indians go to study abroad and remittance is send by their parents from India) was decreased. Another scheme used by government to bring more foreign capital was foreign currency non-resident (FCNR) deposit scheme. As rupee stabilized, curtails on FDI was removed and remittance limit was increased again. So, to control the exchange, government put partial control over capital account. Now RBI is in the same situation again, the central bank could go for capital account control or interest rate increase. The interest rate increase is unlikely because it was increased consecutively in last two policy reviews and interference in interest rate would also mean losing independent monetary policy. The curb on capital account will malign the country’s image as an open economy.

RBI has short term options like Open Market Operations (OMOs) but the central bank want rupee to find its market value. It is not only the Indian currency which is depreciating, currencies across Asia and Europe has depreciated in comparison to dollar in recent months. In fact, depreciation in Turkish currency Lira, Chinese currency Yuan has been substantially sharper than that of rupee. The depreciation of currencies across the world should be seen as ‘appreciation of dollar’ rather than ‘depreciation of other currencies’. It is important for the government and RBI to let Rupee find its market value and not make unnecessary interference. As India pushes for manufacturing, export led economy, and Make in India– the depreciation of rupee will help in these. So, rather than interfering with market value RBI should allow Indian export businesses to take advantage of it. ‘Good economics make bad politics in short run’ but Modi government is courageous and popular enough to take ‘hard decisions’.

Shiv Sena chooses NDA over the opposition on ‘Bharat Bandh’