“Hum Bijli sasti kar denge ji, hum paani sasti kar denge ji” (We’ll make electricity cheaper, we’ll make water cheaper) said a lanky man in an oversized shirt to a sea of audience that nodded mechanically to everything he said. A month later stormed to power, with an even bigger margin than last time. The IITian and ex-IRS CM of Delhi Kejriwal successfully drove home the point that in a democracy, subsidies are sure shot vote earners. 3 years later, A saffron clad Mahanth clad Mahanth said “Is desh ka sabse bada durbhagya ye hai ki sabko Sarkar se subsidy chahiye (The biggest problem today is that everyone wants subsidy from the government). Therein lies the problem and we must commend Yogi Adityanath for taking an unpopular stand in the matter of subsidies.

Subsidies are the best way to distort free market and India with its socialist leanings is doing this for a long time. A subsidy is a form of financial support to an individual, business or institution to promote social and economic policy. India gives subsidies on things like Food, Fertilizer, Urea, and petroleum. Subsidies come in various forms including the direct (cash grants, interest-free loans) and indirect (tax breaks, insurance, low-interest loans, accelerated depreciation, rent rebates). “The biggest problem today is that everyone wants subsidy from the government… We do not want them to march towards self-reliance… We have made every individual and organization such that it cannot walk without support,” CM Yogi said at a program of the dairy department here.

Subsidies are categorized in two forms, the broad subsidy and the narrow subsidy. The broad subsidy is not easily identifiable and they are transferred in both monetary and non-monetary ways. The best example of a broad subsidy is environmental externalities (the economic concept of uncompensated environmental effects of production and consumption that affect consumer utility and enterprise cost outside the market mechanism).

The narrow subsidy is where the subsidizer’s intention is very clear and transfer takes in monetary forms. The classic example of narrow subsidy is the government’s transfer to farmers. The subsidies are used to change to demand and supply equilibrium, to increase the supply and demand for some products. Subsidies targeted at one good lower the price of that good and make them more competitive against other goods, thereby reducing the competition. This is called the spillover effect of subsidies. The effect of a subsidy is to shift the supply or demand curve to the right (i.e. increases the supply or demand) by the amount of the subsidy. Depending on their nature, subsidies are discouraged by international trade agreements such as the World Trade Organization (WTO). 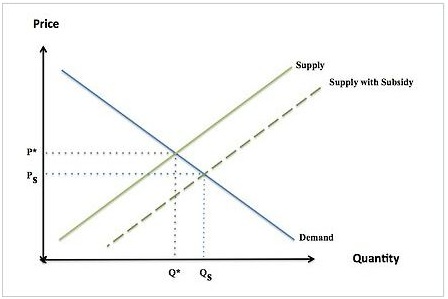 India has a long culture of giving subsidies on products extending from food to fuel. The subsidies provided of various products also stress the fiscal deficit targets. The budget of the social security subsidies of the central government is as follows.

Recently the parliamentary panel told the government to increase vigorous efforts to explore new avenues to contain the rising food subsidy bill which is pegged at Rs 1,38,123 crore for the current fiscal. The Modi government has tried to rationalize the subsidies since it came to power.

The year on year (YoY) decrease in subsidies in the April-June quarter in food, fertilizer etc is as follows:

Subsidies change the natural supply and demand equilibrium because they favor some products while indirectly penalizing others. “Subsidy has never solved any problem and will not help anyone…We will have to develop available resources. There were about 65 to 70 dairies working but most of them closed down as their problems were not resolved timely… The process of restarting them has started now…We will reopen them with a positive outlook, they will become self-reliant and will not require any subsidy.” said UP CM Yogi Adityanath. So every government and chief minister and central government should do away with subsidies.

Not just a quote but a statement, PM Modi’s mention of 3 leaders that went unnoticed