The power sector wants an exemption from Insolvency proceedings under Insolvency and Bankruptcy law (IBC). The government wants to warehouse stressed power projects totaling 25 GW under an Asset Management Firm (AMC) to protect the value of the assets because it expects that power projects will be sold at throwaway prices if they come under IBC proceedings. Therefore the government will bring all projects under an AMC and wait for the power demand to pick up and then sell these projects which will give better returns.  The provision for setting up AMCs was brought in The Securitization and Reconstruction of Financial Assets and Enforcement of Security Interest (SARFAESI) Act, 2002. The SARFAESI is the law that existed before the IBC was brought in 2016 for insolvency proceedings.

According to a government official, “State-run Rural Electrification Corp. Ltd (REC) has identified projects with a total debt of around Rs 1.8 trillion as part of the scheme, which is under government consideration and has been tentatively named Power Asset Revival through Warehousing and Rehabilitation or Pariwartan.” The scheme is inspired by Troubled Asset Relief Programme or TARP which helped the US to overcome the 2008 financial crisis. The decision to bring stressed power projects was primarily due to low bids that these projects were receiving. The projects have drawn bids for around Rs 1-2 crore per MW under the insolvency and bankruptcy code, a fraction of the Rs 5 crore per MW needed to build them. 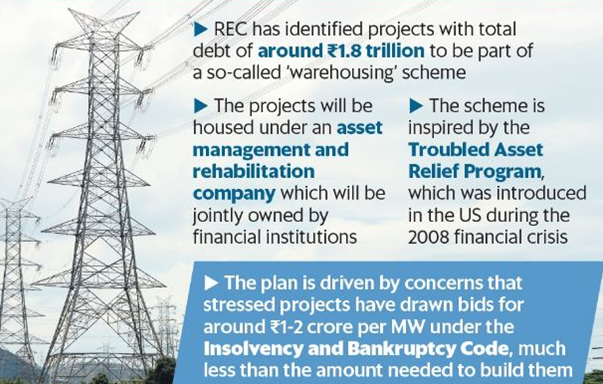 There was a tussle between experts whether the power sector should be provided an exemption from insolvency proceedings or not, since some sections of economists like Principal Economic Advisor Sanjeev Sanyal were against exemptions from a law which is still in nascent stage. Although the people in government like interim Finance Minister Piyush Goyal and Power Minister R K Singh were supportive of the exemption for the power sector. Piyush Goyal held a meeting with R K Singh and some other top officials when Allahabad High Court ruled in favor of the Power Ministry and barred banks from initiating the proceeding against Power producers as per an RBI Circular dated Feb 12.

Earlier, RBI had refused to give any exemptions to power sector from insolvency proceedings, therefore, bringing the stressed assets under AMC was the only option left for banks. The banks are in the process of identifying the stressed assets, and the projects which could be part of AMRC are as following: 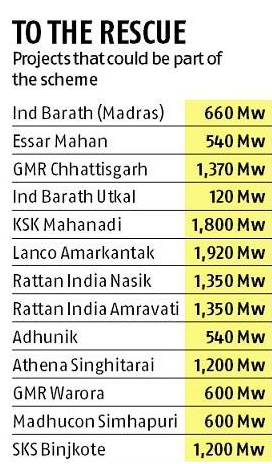 The plan, if it succeeds, will provide a relief to the power sector because if stressed assets have to go through IBC proceedings, then returns would have been very little. According to industry sources, if the plan succeeds it could become the model for other sectors which do not want to go through IBC proceedings. As per government officials the plan to operate the AMRC is that “the promoter’s equity will be reduced to facilitate a transfer of management control to the financial institutions, the lenders will convert their debt into equity. The AMRC will manage the projects and may ask utilities such as NTPC Ltd to operate and maintain them. The AMRC will charge a fee and help complete projects that are stranded for lack of funds. These projects will be transferred to the AMRC at net book value, wherein it will own a 51% stake in the projects and the balance 49% will be held by the lenders.” The step by the government to save stressed assets of the power sector will help to reach the dream of “power for all” and it will also provide resources for 24*7 power supply in rural India.