Rural electrification program: NDA marched on where UPA had quit.

by Ashish Dwivedi
in Trending
0

April 28, 2018 was a momentous day in India’s history. On this day, PM Modi announced that the goal of 100% electrification of India has been achieved, well before the deadline. Leisang village in Manipur became the last village to be electrified under Deen Dayal Upadhyay Gram Jyoti Yojana (DDUGJY). Given the historic milestone, PM Modi congratulated the Nation.

28th April 2018 will be remembered as a historic day in the development journey of India. Yesterday, we fulfilled a commitment due to which the lives of several Indians will be transformed forever! I am delighted that every single village of India now has access to electricity.

However, some ‘liberal’ media voices started questioning the achievement from the very first moment. A self-proclaimed economist tried to underplay the achievement by stating that the rate of electrification has essentially been the same during UPA and NDA regimes.

There was already 94% electrification of villages when Modi came to power. UPA took village electrification from 79% in 2004 to 94% in 2014. NDA2 finished last 6% at the same rate as the UPA,approx 1.5% per year. So 7 decades of darkness is sheer nonsense. https://t.co/Wtek79VPU9 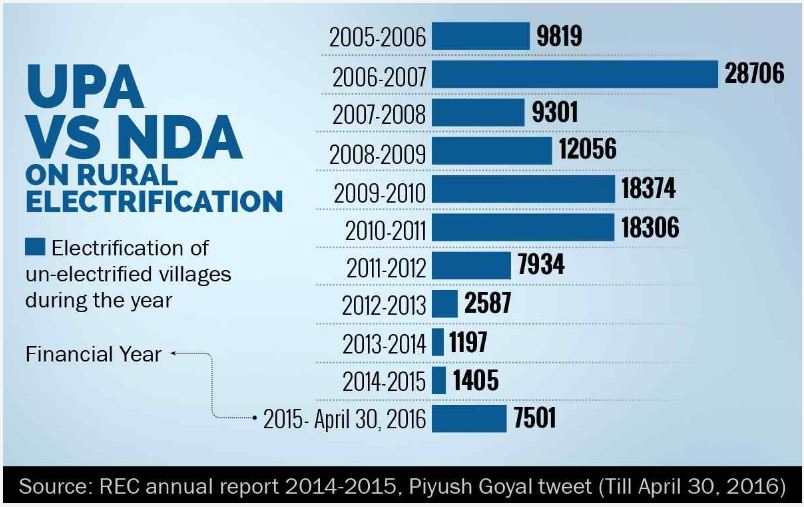 This is clearly not the case with NDA regime. Going by the REC reports, the remaining 18, 374 villages were some of the most difficult places and required cost and effort intensive approach. In light of this, NDA government’s electrification of 7501 villages during the fiscal year of 2015-16 deserves much appreciation.

Another dimension to this story is that most of the un-electrified areas were in the ‘red terror’ zones, the areas where left-wing extremism (LWE) controlled vast swaths of territory with brutal and violent means. The LWE factor posed a significant risk to the electrification process, both in terms of cost and efforts. According to the latest government data, most of the villages electrified since 2016 fall into the LWE zones.  This feat was made possible due to two parallel initiatives of NDA regime. First, the crackdown on Maoist insurgency groups by the Home Ministry has led to significant reduction in the LWE zones, making it possible for the government officials to carry out its policies in the erstwhile ‘no-go zones’ without mortal endangerment. Secondly, the commitment of PM Modi to 100% electrification witnessed a sustained effort towards electrifying even the remotest areas. These two efforts have finally yielded results as the target has been achieved well within the time limit.

Another charge leveled against the government is that for a village to be considered electrified, only 10% of the households and public services (hospitals, schools etc.) need electricity connection. According to this line of thought, the NDA’s claim is without merit and UPA has better performance records. However, the current definition of ‘electrification’ was adopted in 2003 under ‘Electricity Act’. So, the same definition was applicable to UPA government’s electrification program. Despite this, UPA government’s significantly lower annual electrification rate in the fiscal years of 2012-13 and 2013-14 demonstrate a lack of will on the part of UPA decision makers towards 100% electrification, a promise that NDA has fulfilled despite the odds stacked against them.

Furthermore, PM Modi has outlined the need for 100% household electrification under ‘Saubhagya’ scheme and government seems to be committed to that scheme. Additionally, the NDA government realizes that in order to provide round the clock, cost-effective electricity to rural India, the debt-ridden power sector has to be transformed. The ailing power-sector is another UPA-era legacy which is reeling under massive debts and needed a hefty bailout package to survive during UPA regime. According to World Bank report, India’s power-sector had accumulated $77 Billion debt in 2011, amounting to India’s 5 percent GDP. To clear this mess, GOI approved the ‘UDAY’ scheme in 2015. Under the ‘UDAY’ scheme, a debt restructuring plan was initiated through which Indian States will take up 75 percent of DISCOMs’ debt and pay back lenders by selling bonds. DISCOMs are expected to issue bonds for the remaining 25 percent of their debt.

Another instance of false equivalency and selective distortion of facts was provided by a self-proclaimed ‘economist’.

Goalpost shifted from claiming full electrification when pointed out already 96% by the time Modi came into office,to now saying hardest to reach villages electrified.Yet no data offered to back claim.Even if you look at remote village electrification UPA had done >50% of the job

As has been demonstrated in the Garv.gov data (screenshot attached above), almost all the remaining villages in Left-wing extremism (LWE) areas were electrified in the last two years numbering more than 7000 (7, 830 to be exact). Considering these areas are not only difficult for power-infrastructure development and upgrade due to rugged terrain and connectivity issues, the looming threat of Maoist terrorist attacks work as a deterrent factor for government officials to carry out development projects. As REC has already clarified that the most accessible areas are taken up first, so the simple logic dictates that the most dangerous areas would be taken up last. The electrification of 7,830 villages in LWE areas (deemed the most difficult ones by REC) in the given time frame is no mean achievement and vastly surpasses the UPA era electrification rate in its last two years.

Considering the many obstacles that had to be tackled to achieve the 100% electrification and NDA government’s commitment and sustained effort to re-energize the power sector, it is a moment of triumph for the government as well as the people of India. Discrediting this achievement by way of twisted facts, flawed methodologies and false equivalency is nothing but sheer spite.

Manmohan’s attacks on PM Modi’s rule is as ridiculous as his own tenure as the PM.