No Result
View All Result
Newswire
International Women’s Day: DIY recipes 31 mins ago
A Toast to the #WomenWhoMakeYou 31 mins ago
Double murder in Agra leads to panic 35 mins ago
Lahiri to play at The Players Championship after Koepka withdraws 37 mins ago
Khaleda may get extension to stay out of jail 43 mins ago
Ariz Khan convicted in Batla House encounter case (Lead) 46 mins ago
Next
Prev

Analysis of the consistently increasing GDP growth under the Modi government

India retained its position as the fastest growing major economy in the world with 7.7% growth in fourth quarter of the fiscal year 2017-18. Central Statistics Office (CSO), the government agency which GDP growth data released GDP numbers for the fourth quarter and 2017-18 fiscal year on 31st May. According to the data, growth for the fiscal year 2017-18 came at 6.7 percent while for the last quarter at a whopping 7.7 percent. The growth rate is more than the government’s expectation because Economic Affairs Secretary Subhash Chandra Garg had said on Monday that annual growth was expected to be between 7.3 and 7.5 percent in the March quarter. This is the fastest economic growth in last seven quarters and now India is the fastest-growing major economy as it took over China which had a 6.8 percent GDP growth in the last quarter. 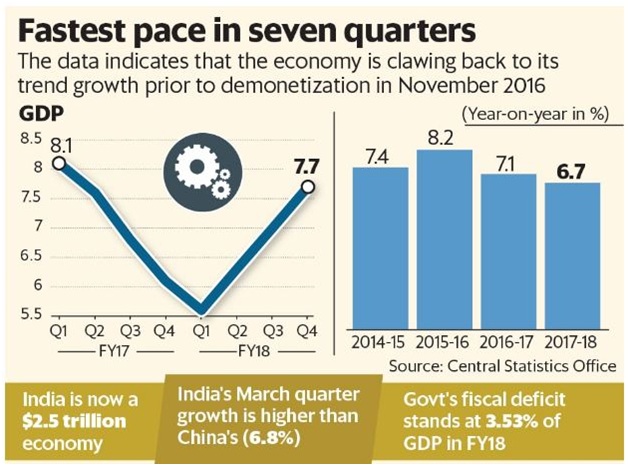 The reason behind this stellar economic performance is a strong recovery in construction activities with a double-digit growth of 11.5% and robust performance by manufacturing (9.1%) as well as agriculture sector (4.5%). Some sectors like financial services and trade saw a dip due to weak lending by banks and the implementation of GST by the Modi government. 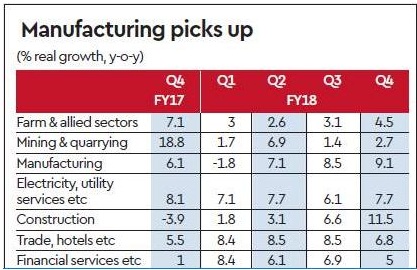 The economy, however, got a boost from higher government spending (13.3%) in the March quarter. Gross fixed capital formation, a proxy for investment demand in the economy, expanded at a double-digit pace (14.4%) after a gap of seven quarters, signaling a revival in investment activities. Government consumption expenditure rose at 16.8 percent compared with 6.8 percent in the three months to December 2017 and 2.9 percent in the quarter ended September 2017. Therefore some economists also gave a cautionary note to the Modi government because growth led solely by the government is not sustainable. The former Chief Statistician of India, Pronab Sen said “Construction has been driven essentially by public infrastructure spending. If that’s the case then you may have a situation where the strong growth in fixed capital formation is essentially a public investments driven figure. That’s necessarily not very sustainable.”

Most economists appreciated the new developments in the Indian economy and suggested that Indian economy is poised to grow at a faster pace in upcoming years due to sound macroeconomic stability in the country.  Anis Chakravarty, Lead Economist, Deloitte India said “Currently, the Indian economy is in a sweet spot, with most macro-prints on the upside, especially seen in terms of broad-based industry growth, improving sales data, and positive sentiment as evidenced through the purchasing managers’ index (PMI).” On the robust economic growth of the country Finance minister Piyush Goyal tweeted GDP growth has been increasing continuously every quarter with growth of 7.7% in Q4 of 2017-18,” finance minister  shows that the economy is on the right track & set for even higher growth in the future.”

GDP growth has been increasing continuously every quarter with growth of 7.7% in Q4 of 2017-18. Shows that the economy is on the right track & set for even higher growth in the future. This is the #SahiVikas under leadership of PM @NarendraModi ji & @ArunJaitley ji

The contributions of different sectors in the GDP growth are as following: 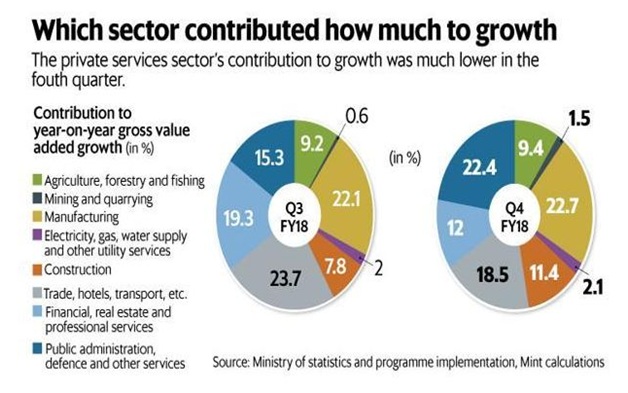 The economic reforms by the Modi government like demonetization and GST, although proving to be detrimental to the economy in their initial stages, proved to be highly beneficial in the long run as they simplified taxation and ease if doing business. Demonetization helped the country in broadening its tax base which ultimately led to more money in government coffers. According to Economic Survey 2018, 10.1 million people filed income tax returns in the year following demonetization (November 2016- November 2017), while the average for the last six years has been 6.2 million. This shows an increase of over 1.5 times the previous number of income tax returns filed. GST is showing its positive effects slowly, although many changes are still being carried out in the single indirect tax regime. The IBC is helping the country in solving its Non Performing Assets (NPA) issue and reviving the banking sector. The impact of these reforms is clearly visible in the economy in the form of aftereffects of the implementation of GST and demonetization. It seems that the Modi government is progressing towards its dreams of double-digit economic growth in the country.