Modi government succeeded in electrification where Sonia and Manmohan failed

Saturday, 28 April 2018 was a red letter day in the history of Indian governance, as most of the 16 households of Leisang village in Manipur got access to electricity. This is unique because this village in Manipur was the last village in India, which wasn’t electrified till date. With that, the Modi government, which had promised to give access to electricity to all the rural households, fulfilled their aim 12 days before the deadline.

“…Yesterday, we fulfilled a commitment due to which the lives of several Indians will be changed forever.” He added “…I am delighted that every single village of India now has electricity.”

This tweet confirmed the rural electrification scheme of ‘Deen Dayal Upadhyay Gram Jyoti Yojana’ as a resounding success. Supervised by PM Narendra Modi, with ex-Power Minister [now Railways Minister] Shri Piyush Goyal and incumbent Power Minister Shri RK Singh overseeing this revolutionary change, the 18500+ villages that were left without any access to electricity are now completely electrified, with at least more than 80% of the households having access to basic electricity.

While most of the denizens hailed this move, the detractors as usual refrained from commending PM Modi for this notable achievement. Led by Congress President Rahul Gandhi, the detractors tried to find flaws in the scheme, that had expressly declared its intention to provide every village with access to basic electricity [i.e at least 30% to 70% of the households and other tenements will have basic power supply, as per the newest parameters] .

The Congress also attempted to usurp the credit for the hard work done by the BJP government in the past four years. While the list is quite long, this article by Business Standard contains some select gems from the mockery targeted at the Modi govt.

Congress mocking Modi for his ‘tall claim’ is a classic example of the ‘pot calling the kettle black’. The two think that the Indian masses are as gullible as they were more than a decade ago when the Congress was voted to power. The facts given below, however, bust this cooked up theory fair and square.

Not one to take this lying down, Narendra Modi himself took Congress to task for trying to mislead the nation. In his explosive speech at Mysuru, he revealed a dark secret: Congress themselves failed to achieve this objective, which they had aimed at achieving in their very first term of 2004-2009, under the name of ‘Rajiv Gandhi Grameen Vidyutikaran Yojana’ as revealed by the following images:- 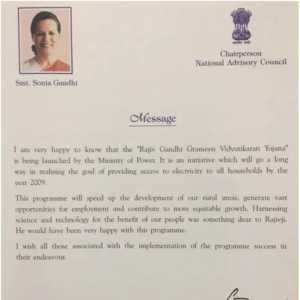 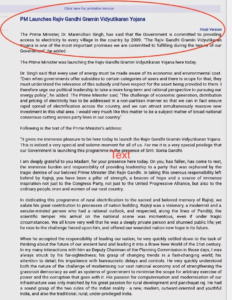 In the first image, Sonia Gandhi, as the chairperson of National Advisory Council, congratulates Manmohan Singh for initiating the idea of electrifying all the villages by 2009, while in another; Manmohan announces this scheme to the press. The 18500+ villages, that should’ve been electrified by 2009, have taken 9 years to get the required access to electricity. That speaks volumes about the progress under UPA government [2004-2014]. As said once by the famous actor Raj Kumar, ‘Jinke ghar sheeshe ke hon, who doosron par patthar nahin phenka karte’ [The ones with glass houses don’t throw stones on others]

If one carefully observes the rate of progress under the Congress era, we notice that the rate of electrification reduced with every progressing year. Not only did they miss their target in 2009, they also couldn’t complete their target in the next 5 years as well. Had this continued, it would’ve taken decades to give all the Indian villages basic access to electricity.

Known for his strict work ethics, PM Modi arrived, set a deadline, and exhorted his subordinates to work in that direction, so much that the scheme was completed 12 days before the actual deadline. This also goes to show that, despite massive misinformation campaigns by the opposition parties, credit will be given where its due.