Cambridge Analytica, which had ties with Congress, shuts down

After being royally exposed and bashed by netizens around the world left, right and center, notorious data analytics firm Cambridge Analytica has finally decided to shut shop worldwide. This was not entirely unexpected, owing to their suspension by social media trendsetter Facebook over allegations of massive data theft.

Formed in 2013 with the aim of providing political consultancy to politicians all around the world, Cambridge Analytica has been in controversy, be it allegations of rigging elections in countries like USA, or trying to play the dirty trick of ‘Divide and Rule’ in emerging superpowers like India.

Suspended by Facebook Inc. over its handling of user data of more than 50 million users around the world, this notorious firm was also allegedly involved in an attempt to rig the US Presidential elections in 2016, which was ultimately won on the basis of Electoral College vote share by real estate magnate Donald Trump.

According to Reuters, the company will now file for the proceedings of insolvency.

To quote them,
“….after losing clients and facing mounting legal fees resulting from the scandal over reports the company harvested personal data about of millions of Facebook users beginning in 2014……..The siege of media coverage has driven away virtually all of the Company’s customers and suppliers”

“…As a result, it has been determined that it is no longer viable to continue operating the business, which left Cambridge Analytica with no realistic alternative to placing the company into administration.”

Christopher Wylie, in his expose of Cambridge Analytica, expressly stated that the firm had large scale operations in India, with its own office, and also worked extensively with the Congress party. While he doesn’t deny that his employers might have worked with other political parties as well, the Congress party was nonetheless their biggest and most trusted client in India.

Despite the allegations being denied and mocked by the Congress party, the evidences of their links with Cambridge Analytica proved otherwise. Hardly had the party propped up to mislead the nation with its botched defense, when a BBC documentary exposed their deep ties with CA, with the CEO Alexander Nix sporting the party’s emblem in his personal chamber. 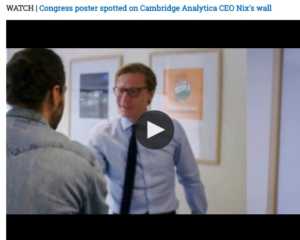 Even disgruntled politician and ex Congress spokesperson Shehzad Poonawalla wasn’t far behind in exposing this deceit. Poonawalla, who had fallen out with the party over the ludicrous election of Rahul Gandhi as the party president, presented a copy of the 49 page handbook to the press.

This handbook described Congress’ roadmap to winning the 2019 polls, in collaboration with Cambridge Analytica, with disastrous repercussions for the nation’s integrity had it been implemented:- 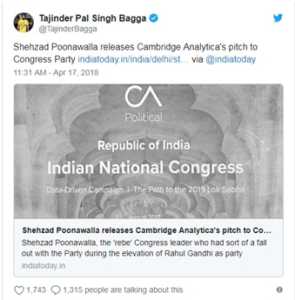 One might ask why an ordinary Indian should be elated over the disbanding of Cambridge Analytica? It is because their connection with an Indian political party, as exposed by whistleblowers Christopher Wylie and ex-Congress politician Shehzad Poonawalla , revealed the dirty game of ‘Divide and Rule’ that would have further ruined a nation already besieged after 60 years of Congress rule.

Dalit group from Tamil Nadu stuns the nation, demand the withdrawal of their SC / ST status