HOME » Politics » Opinions » As per Rahul Gandhi, the Mahabharata war took place in the year 1018

As per Rahul Gandhi, the Mahabharata war took place in the year 1018

by Shridutt Gaitonde
in Opinions, Trending
0

When we talk about the new re-branded Rahul Gandhi, one important factor of it is his adoption of soft Hindutva. The visiting of temples during the Gujarat polls, and now in Karnataka, is a testament to the fact. Nevertheless, even if the newly anointed Congress president is relaunching his political career (again for the nth time), he still isn’t refraining from embarrassing himself by misquoting facts. Especially when it is from ancient Hindu epics like the Mahabharata.

In the recently held Congress plenary session, Rahul Gandhi made a scathing attack on the BJP. In a rhetorical outburst, the Gandhi scion was quick to criticize PM Modi, BJP and the current dispensation. To portray the BJP as evil, he made a few comparisons. In another speech now, he has attempted to draw analogies from the Mahabharata to stress his point. This time, he said that the Mahabharata happened ‘1000 Years ago’ (and not Thousands of years ago). He reportedly said it to depict the BJP as Karauvas fighting for power and the Congress as Pandavas fighting for the truth.

Adding a screenshot, just in case they delete the tweet! 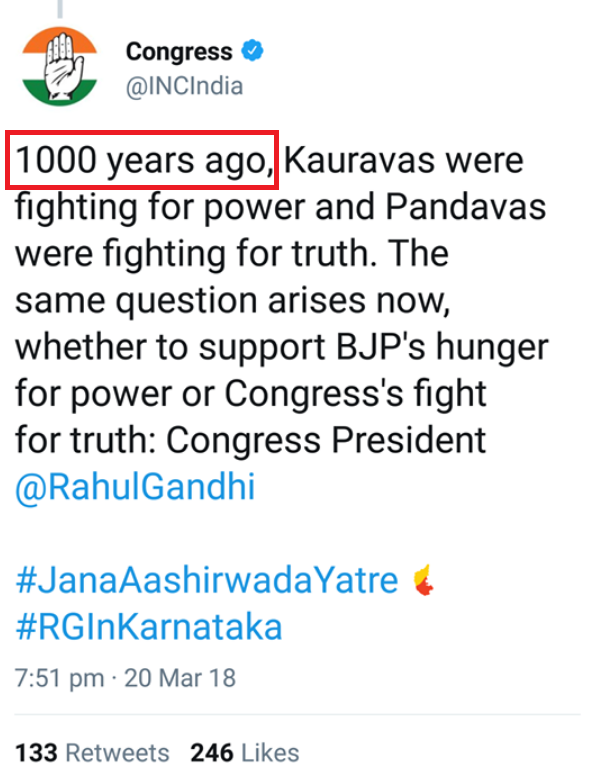 Rahul Gandhi postponed the occurrence of the Mahabharata, and presented it in a different era altogether.

Based on the astronomy of Saptarishi Mandal, the Kurukshetra battle may have occurred in 3138 BCE. Ancient Indian Panchangs have been mentioning the year Jaya Nama Samvatsara (2014-15) as Kaliyuga’s 5116. So, it has possibly been 5115 years since Lord Krishna’s demise and the battle was fought even before that.

These calculations are based on mentions in the Mahabharata itself. By dating the epic to only a thousand years ago, Rahul Gandhi has pushed it into the medieval period, almost close to the time when the Delhi Sultanate was being established (12th century AD).

This glaring goof-up will have many profound implications, as it displays yet another desperate attempt by the Gandhi scion to raise his hollow stature.

Firstly, it highlights his lack of knowledge about ancient Hindu epics. It not only displays his ignorance but also exhibits his cosmetic indulgence in wooing Hindu voters. Just to make a comparison, he used a sacred Hindu epic, and indulged in blatant inaccuracies.

Rahul’s image-makeover is nothing but old wine in a new bottle. Even if the Congress Party is planning to hire new agencies to enhance his image, his misgivings continue to create controversy and make him look like a clown. This will affect his attempts to repackage himself and put him in the same bandwagon as any other ignoramus.

This is a major blow to his attempts of peddling soft Hindutva as a ploy to counter the BJP. In order to lead seriously, the least Rahul Gandhi can do is to cross check all the facts and figures before jumping to conclusions and comparisons. Such mistakes will not do any justice, but in fact reiterate that his soft Hindutva agenda is nothing more than just another appeasement policy.

The Congress Party and Rahul Gandhi are known for two factors which may never change. Firstly, it’s their divide and rule policy, which they have fully displayed in the ongoing Lingayat issue in Karnataka. And second, is to allow Rahul Gandhi to campaign during polls and make his trademark bloopers. Move over incidents like tearing ordinances, with his latest hit wicket on Mahabharata, it’s proven that Rahul baba will never cease to make a laughing stock of himself.

An Embryologist by profession,an aspiring writer, media enthusiast, political commentator, loves to experiment into sketching and painting, is learning cartooning and a sworn bibliophile digging into books.