Nehru’s rule: A nightmare from which the country is still recovering

Much of the Indian Post-colonial history circles around the failures of the Congress rule with Nehru at the Helm of it since the very beginning of Independence era. Yet we have found him coming out every now and then, like a spider from a dark corner of history, cherished in speeches and books written by people from the ones who knew him since his Cambridge days to the new Nehru-schooled millennials of today. But equal is the number of those honest and ‘unstaged’ historians, authors and politicians as well, with more promising facts than the former blind apostles of Nehru-charm, who have known the roots of the failures that he and the Congress bore over several decades. This article may not be sufficient to recount all the ruins that India went circling down into during the Congress rule, but the PM’s recent speech in the parliament, have some key cues to help us understand why it is taking us too long to get back on track, and why, giving the gravity of Congress failure and long term goals of BJP to undo them, a second Modi rule is vital and essential. To spare the lefts some pain, we will not be speaking about the reforms that the current government is able to pull off, despite the diseases of scams, loot, mafia, Naxalites, organized crimes, terrorism and communal tensions that Congress has laid all over the face of the nation during its long sorry years.

The First Prime Minister: What Congress of post-Nehru setup pioneered as ‘Political lobbying’ to satisfy the whims and fancies of some of its own members (probably one of the fundamental causes of scams as well) is nothing but what Nehru had sown the seed of already when he ‘sponsored’ himself as the Nation’s first Prime minister disregarding Sardar Patel’s democratic majority. Nehru couldn’t resist the idea of not being the first Prime Minister himself and it was left for Gandhi to decide.

The fact that Patel, a man of integrity and a character that Nehru could never possess, never resisted and Gandhi – in his short-sightedness to realize what gamble is being played with country’s national and long term interest – had no problems with Nehru taking the control – paved the way for Nehru to become the first prime minister. Gandhi, with all his Love for Nehru, too clearly revealed in the letters he wrote about Nehru’s mercurial and temperamental heart. In a letter to him he wrote on August 28, 1936, Gandhi said ‘Why is it that with all the will in the world, I cannot understand what is obvious to you? I am not as far as I know suffering from intellectual decay. Should you not then set your heart on at least making me understand what you are after?’ —Mahatma Gandhi to Nehru ‘You are in habit of proclaiming that you stand by yourself and represent nobody else. At the same time, you call yourself a socialist—sometimes, a full-blooded socialist. How a socialist can be an individualist as you regard yourself beats me. The one is anti-thesis of the other.’[1]

India China war: Among many other critical shreds of evidences now available to the public, a report published in 1963 by Lt General T.B. Henderson-Brooks and Brigadier P.S. Bhagat asserts that the loss to China was the diplomatic and strategic follies of Nehru and his defense minister V.K. Krishna Menon. More ever, the biggest collateral damage that nation has suffered is the Nehru’s failure of leadership during the 1962 Sino-Indian war that resulted in an uncontained imperialist China assuming that even Arunachal Pradesh is a disputed territory even now and not an integral part of India.

The Scars of partition and the sorry state of J&K: No one knew with details at that time what arrangements were made between Mountbatten and Nehru that the nation was decided to be cut into two until it already had happened. That one failure of Nehru non-secularism had given scars to millions through generations. Why not politicians be charged with genocide that happened due to their decision and policies?

PM Modi in his speech also said that “Had Sardar Patel been India’s first prime minister, a part of Kashmir would not have been under control of Pakistan”. There is no doubt about that either. A draconian article 370 for the state of Jammu and Kashmir was Nehru’s idea and the repetitive misuse of Article 356 in several states in later terms were nothing but cascading effects of his failed leadership that found its way into Indira’s and Rajiv genes.

Congress – as a party with no ethics and character: Congress owes much of its motivational characteristics and ideological inheritance to fascism and fiasco of the likes of Indira, Rajiv and now Sonia at the rudder’s helm. Even Nehru’s own character was dubious to many so much so that his relationships with Mountbatten’s wife Edwina continue to be talked about even today. The Congress at that time was a party with largely no belief and understanding in the ideals of true secularism, integrity and ethics – and the same has been channeled down into its lineage today. The fake arrest of Shankaracharya J. Saraswati due to Sonia’s hate for Hindus has been recently revealed in Pranab Mukherjee’s book ‘The Coalition Years 1996-2012’ as well. And the reason why under Congress watch, the anti-modi figures have consistently turned themselves into clinical cases of ‘anti-India’ elements (supported by journalists terrorist-sympathizers authors like Roy and Nandy) explains a lot about Congress morality. As such, the country’s resilient democratic setup owes nothing to a fiddle-footed man like Nehru or to his successors. Infact the Congress family owes its success and rule to Indian people who gave them chance to run the nation for such a long time despite they having derailed the country several times. It is infact Sardar Patel, Dr Rajendra Prasad and C.R who more accurately reflected the feelings and desires of most Indians than did the western ideals of Nehru and his cohort [2].

How much relevant are Nehru’s failures are for today?: ‘The first step to solving a problem is to see one’ but Congress and Nehru’s acolytes continue to be blind about the problems even today. Even the game changer economic schemes such as GST, demonetization, digital push of the government that promises to usher a new era of economic reforms and put nation’s progress back on its track which was left in tatters over sixty disastrous years of Congress rule, couldn’t entice the opposition’s MPs. Sadly, looking at the progress that the countries around the word have made, who got Independence much later than us, we compare to only a few. But it is not in Congress’s DNA to be at the back-foot or to acknowledge the problems they have created and hence any expectation from them for a support in finding a solution would be a mere fantasy. The brainless hooting of the Congress in the parliament and their Schizophrenic rhetoric on PM’s speech that literally slaughtered them and brought forth their sins to the public once again, was followed by even much laughable counter attacks post the session – a hallmark of party’s escapism from their failed governance.

Read you may a thousand books that twist history’s collar to cherish his time, but an honest assessment of obsessionist Nehru is bound to include the grave failures of his years, failures that continue to be exposed even when he is (thankfully) not around to play with his own short-sighted ideas of democracy at the cost of nation’s progress anymore.

Nehru gave India a bureaucracy that had either no spine or the one sold to politicians with taxpayer’s money, a country plagued with corruption and flood of black money in nearly every sector, a hostile neighborhood, a troubled state of J&K. Take a look at this picture below from Kalam’s Beyond 2020 book. The state of progress and reach for even the basic social services speaks volumes of the Congress’s legacy of 60 years. The smallest shaded region in the middle is the current state of affairs and the biggest is what it should have been for these societal attributes. 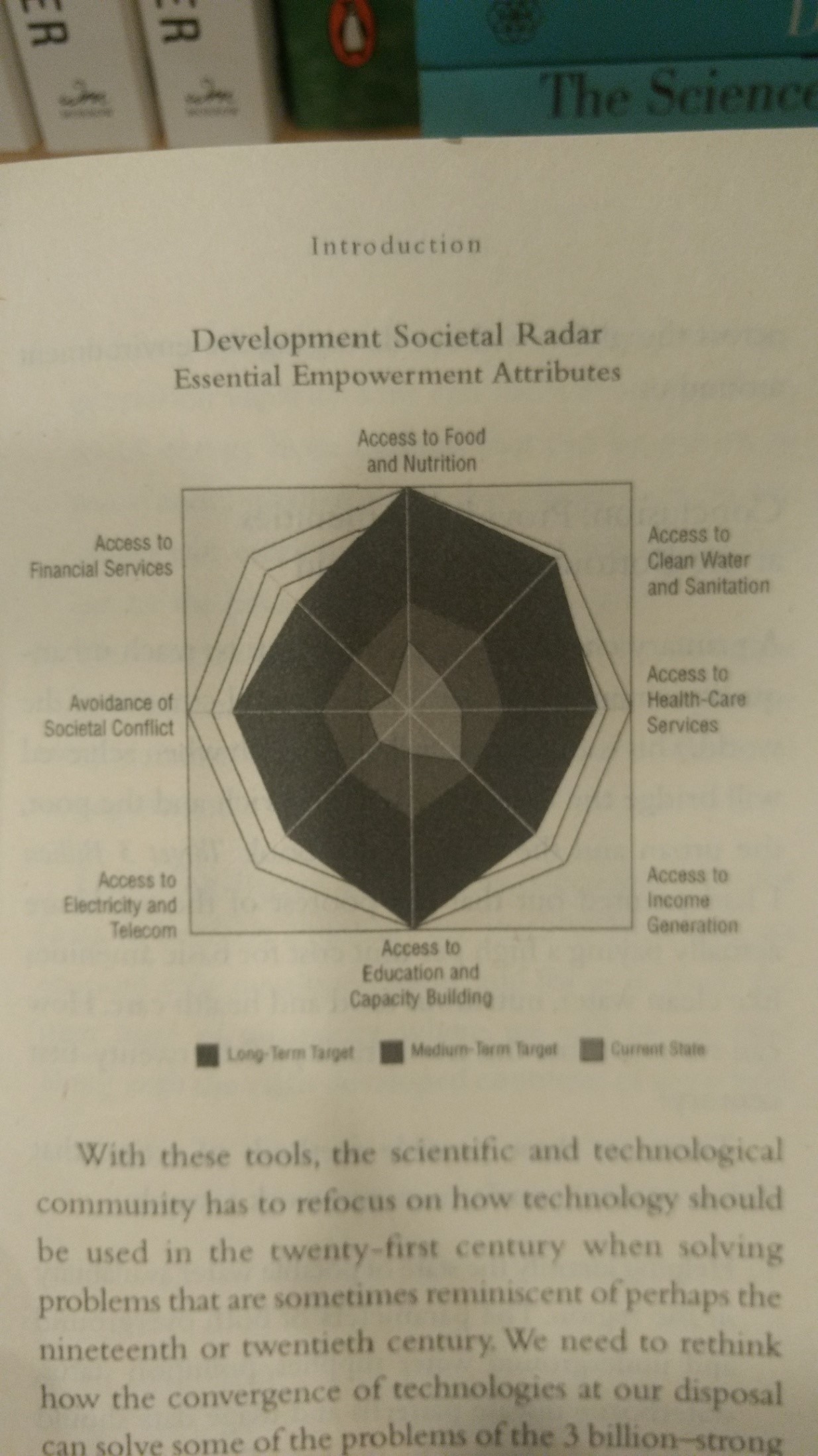 While PM’s recent deliberation – whether on or off the parliamentary desk, have always made Congress MLAs look like circus monkeys hopping from one branch of failed excuses to another to save their humiliated faces, the real flaw lies not just in the way that the Congress with current leadership thinks and works, but the way it inherits all its flaws from its predecessors in its very character. Their failure to not recognize good works by others, their fanatical motives to instigate communal riots in the name of movies, religion, their unconstitutional ways to capture vote banks, their back door support to anti-India elements just to capture political thrones, their nature to politicize natural killings and suicides into mass upsurges, conspiracy killings of scientists and true leaders such as Bose, Shyama Prasad Mukherjee, Shastri, their ‘bhakti’ to one family much more are all inbuilt traits of the character that Congress possesses. And evidently, the root of everything goes back to the time of Nehru. Irony that Nehru once said that the reason for him to break off its ties with Bose was when the latter wanted to shake hands with Mussolini to free India, when Nehru himself acted more or less the same way in many occasions.

PM’s blistering attack on Congress opened a whole can of worms for Congress and ripped apart its entire history of terrible rule – that is besieged with disregard to consistent constitutional and federal principles, democratic, strategic and security and social failures. However, when we think about it, none of the above failures compare to the fact that the vigor and rich aspirations of an independent nation, sixty years ago, was completely found waster at the hands of Congress. We had the first golden opportunity to build the nation of everyone’s dreams but we lost it and we cannot take it back. Now, to set all these things right, and to end the nightmare of Congress rule, a statesman like PM Modi may be needed for decades for who knows how deep the rabbit hole goes still.

[1] Book – Gandhi’s Passion: The Life and Legacy of Mahatma Gandhi By Stanley Wolpert.

How Congress failed to stop the unstoppable PM Modi

Patel was backstabbed by Congress. PM Modi’s criticism of Nehru is Justified

The Want of a Safe Job: Root of all mediocrity in India