Ilaiyaraaja PVB is a legendary Indian film composer who works predominantly in the South Indian cinema, since the mid 1970s. Ilaiyaraaja is an instrumentalist, conductor, singer and songwriter. He has composed more than 6500 songs and provided film scores for more than a 1000 films. He is considered a Musical Maestro and a man with a natural talent for melody. Ilaiyaraaja was recently conferred with Padma Vibhushan, but Media thought of giving the news a casteist spin!

First the background of the toadies culture in India and the role awards and plum postings play in it:

Long after India’s independence the elites in the country continued to enjoy the privileges that were akin to the largesse bestowed upon those who toed the line of the British in the pre-independent India. This practice of sharing the favours in return of mobilizing the opinion of the masters bloomed a lot during the decades of Congress rule. Like most government machinery and tools, Padma awards too couldn’t remain untouched from such malpractices.

What was supposed to be a recognition of the brilliance of human excellence turned out to be a loaf distributed to the undeserving candidates!

But Modi government slowly and steadily has taken to the task of eradicating such practices which fuel sycophancy. If you go through the list of Padma award winners this time, you will come across names you might have never heard of. I did not know a lot of those names and I am not proud of it. But at the same time, there is a sense of relief that this only shows the government is doing its job the way it should be done.

One such name to be conferred with the Padma honour this year was legendary music composer Ilaiyaraaja, whose songs have featured in BBC World Top Ten Music Polls. However, as is the case with the mainstream media these days, twisting the narrative to serve anti-establishment goals came to the fore when The New Indian Express termed the whole affair as ‘Dalit Outreach.’ Well there couldn’t be a more shocking example of the sinking moral standards in media industry. 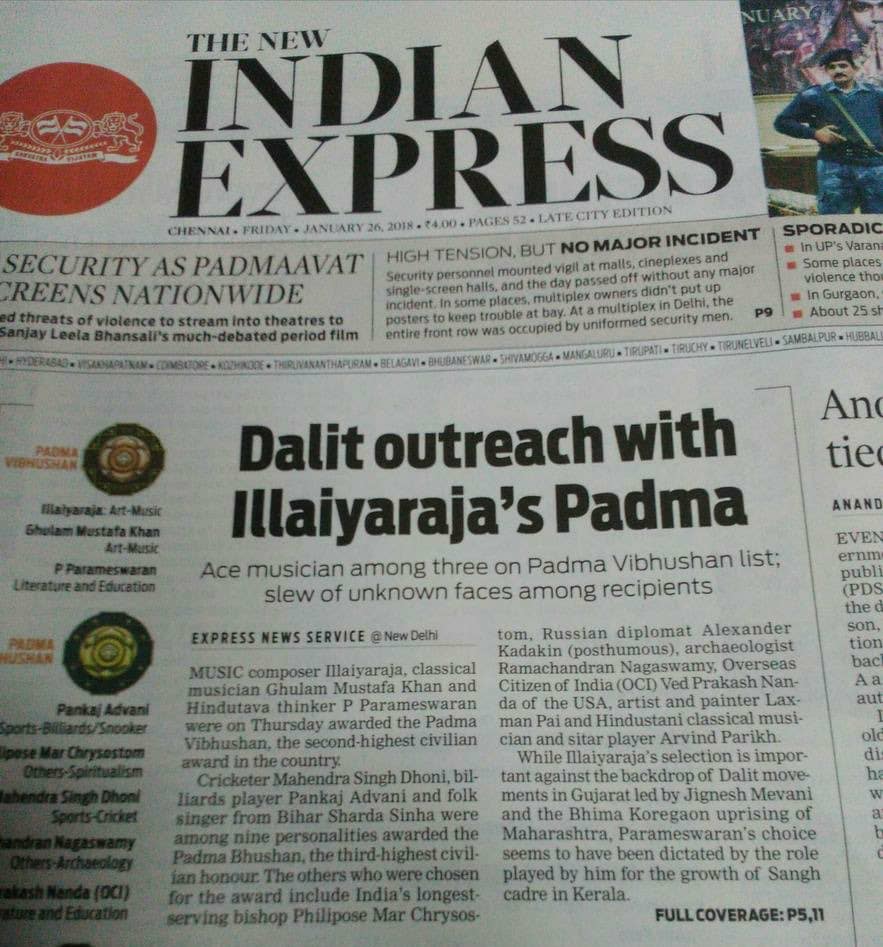 Let me dissect the problem in two parts:

1st.  This government and its policies have often been accused of segregating the society on caste lines. And while trying to dig for pointers to fuel the allegations, this is what the media comes up with. This Media Story does not just demean the Padma awards but the numerous years of hard work Ilaiyaraaja has put in to reach where he is.

2nd. A large section of media used to be hand in gloves with the governments of yore because that is how the system worked. Padma awards were gifted in heaps to the ‘crème de la crème’ of the lobbyists. Since the system has ceased to exist, the frustration of not finding themselves amongst favour might have led to this kind of reportage.

The fourth estate must always be a vocal critique of the government. But propaganda should never blind the judgement so much that it starts appearing like settling of scores that ensues personal animosity.

The fact that this has come from The New Indian Express that has largely been a sensible media house amid the chaos is all the more surprising.

The media house will do well to realize that it’s not advisable to follow the herd. And the herd today is largely against the policies of the government and does not let go of an opportunity to flip the narratives and twist facts.

Reportage of such events go global too. Of late media and the opposition has done enough damage to India’s image at the global level. In their bid to show the government in a bad light they have been projecting India as a cast driven society that does not care about the marginalized. While the truth is far from it. It is thus expected of the media houses, at least the sensible ones out there, to think and research vehemently before forming the narrative. For what they write are not just mere words, they carry the power to water down some of the good deeds of the policy makers.