Hostile Takeover of Temples by the Communists in Kerala

“Religion is the opium of the people”   –  Karl Marx

The full quotation was this- “Religion is the sigh of the oppressed creature, the heart of a heartless world, and the soul of soulless conditions. It is the opium of the people”. Karl used the phrase as an introductory phrase of his book of philosophical criticism he never finished.

The Indian communists often recite the shorter version of Marx’s philosophy to despise specific religions and to demean people’s beliefs and faiths. However, while Marx used the quotation to criticize or summarize the effect of organized religions that are more regressive in nature, our Indian communists use it as a tool to vilify the unorganized and non-rigid religion followed by the majority of Indians. Surprisingly, they practice secularism by not using the same phrase against the organized and rigid religions practised in India.

An example of their hypocrisy is evident when they could easily burn Manusmriti by calling it a regressive religious book, but they cannot gather the courage to criticize the religious texts that support some inhuman and arachaic practices such as female genital mutilation. Anti-Hindu activities like supporting people like Prof.  K.S. Bhagvan who called to tear pages from Bhagwat Geeta, or drawing nude graffiti of Goddess Durga on the campus wall of Jadavpur University of West Bengal, or using nude images of Maa Saraswati in banners, etc. were Freedom of Expression for the communists.. 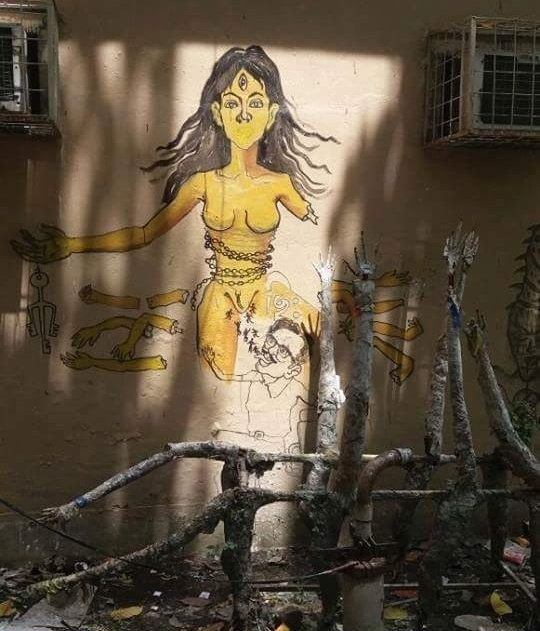 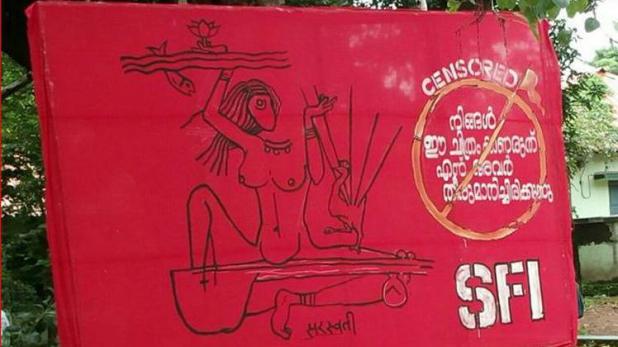 However, the anti-Hindu CPI/CPM parties, which claim to be atheist by core ideologies, never shy away to show devotion to Hinduism when it comes to gain political mileage. Upon seeing the rising waves of Hindutva, they tried to portray themselves as non-anti-Hindu by organizing Janmastami celebration of their own where kids dressed in Krishna’s outfit carried placards showing Karl Marx. 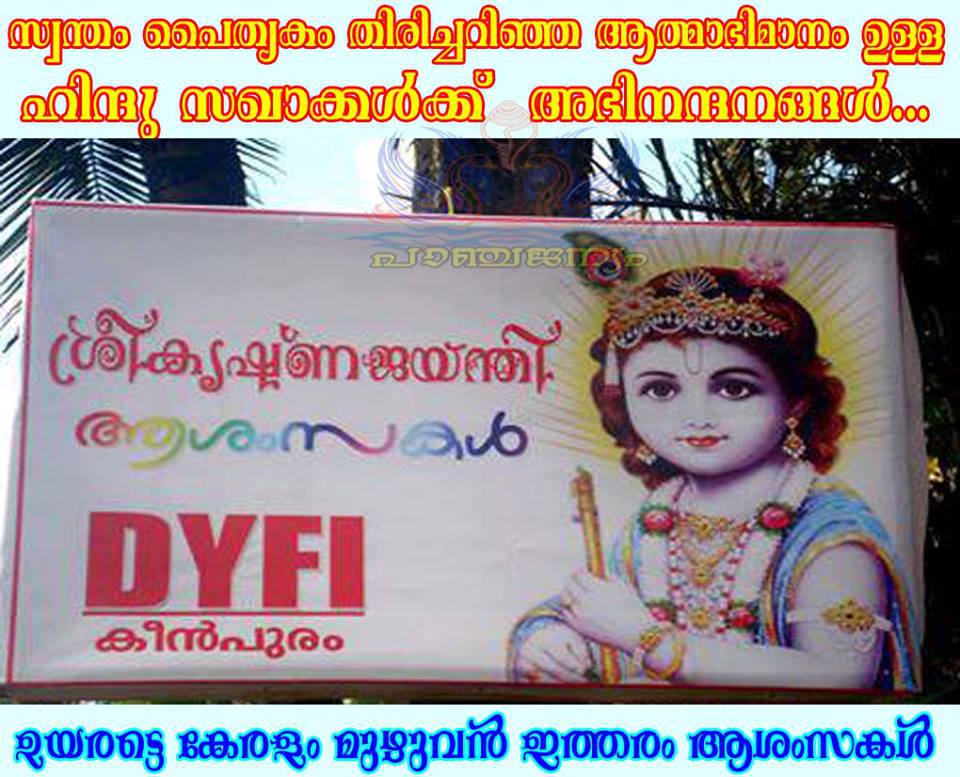 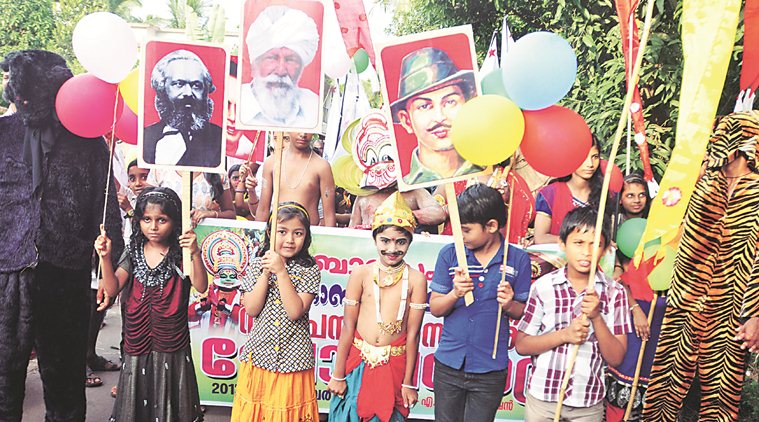 In 2016, they arranged for “Sobha Yatra” to counter BJP’s Krishna Jayanti procession on the day of Janmastami.

The Godless CPI/CPM, which switches between theism and atheism selectively, is now trying to control the Kerala temples exactly as the Karnataka government uses HRCE Act to control temples of Karnataka.

Devaswom are socio-religious trusts whose main aim is to manage Hindu temples and their assets and to ensure their smooth operation in accordance with traditional rituals and customs.  Devaswoms comprise of members nominated by both government and community. In Kerala, private Devaswoms or Devaswoms controlled by Government of Kerala manage most of the temples. The properties of each temple are deemed to be the personal property of the presiding deity of the temple and are managed through a body of trustees who bear allegiance to the presiding deity.

In an attempt to gain control over the temples, the communist government of Kerala passed an ordinance on 10th November 2017 to reduce the tenure of Travancore Devaswom Board (TDB) from three years to two. The ordinance aimed at disbanding the TDB chair Prayar Gopalakrishnan appointed by the previous UDF Government. The ordinance came just one day before UDF nominees P. Gopalakrishnan and Ajay Tharayil completed two year on 11th November. The haste of the decision can be understood since it came just six days before the annual Sabarimala pilgrimage.

BJP state president Kummanam Rajasekharan said that the decision was politically motivated and asked the Governor not to sign it. Dismissing the claims made by Kummanam, Devaswom Minister Kadakampally Surendran said that LDF intended to reduce the tenure and the ordinance is to amend the Travancore-Cochin Hindu Religious Institutions Act 1950. After the Kerala government assured the Governor that the ordinance would not affect the preparations of Sabarimala festival, Governor P. Sathasivam signed the ordinance.

No matter whatever logic the Kerala government puts forth, it is an open secret that the government wanted its own people at the helm of the board during such a huge occasion. Former CPM MLA and the vice chairman of the Kerala Cooperative Deposit Guarantee Board, A. Padmakumar is the new president of TDB and the member, K.P. Sankaradas is a leader of the AITUC, the trade union wing of the CPI.

According to a report published by Times of India in 2012, the 42 Public Sector Undertakings in Kerala make Rs 200 crore a year in revenues while the four Devaswom boards can yield annual revenue of Rs 1,000 crore. As per Sunday Guardian, TDB is the richest Devaswom board among the four- Guruvayur, Travancore, Malabar and Cochin. The Sabarimala festival alone earns the TDB a massive amount of Rs. 200 crore every year out of which Rs. 100 crore is spent on other temples under the board. Mahadevar temples at Ettumanoor and Vaikom in central Kerala also come under the TDB and generate adequate revenue. Moreover, TDB has many colleges under its jurisdiction that generate an earning and are enough to draw the communist devotion towards the religious boards. It is not a surprise that the atheist party suddenly developed immense devotion. The excuse, which the communist regime gave for the change, is the charges of corruption and the government is planning a vigilance inquiry.

The CPI/CPM is aiming at capturing the temples. The prime reason is to control the wealth of the temples and to use it in public welfare programs and gain votes from it. The secondary reason is also easy to understand. However, the Travancore Cochin Hindu Religious Institutions (TCHRI) Act says that the wealth of the temple can only be used for upkeep & propagation of Hindu religion and allied institutions. The third reason is to take charges of the temples, which act as a point of unity for the Hindu community and to ban certain Hindu groups like RSS, Hindu Aikya Vedi, etc. from participating in temple activities. In 2016, the Devaswom minister accused RSS of storing arms in Hindu temples but failed to mention the name of the temples that the saffron group used for storing arms.

The common tool of overtaking temple administration is the allegations of corruption against the administrative body. On the pretext of alleged corruption charges, the Kerala High Court ordered the government to take over the temple administration of Parthasarathy temple. On 21st September, officials of Malabar Devaswom went to take the control, but the devotees shut the temple from inside to prevent the takeover. On November 7 2017 the Malabar Devaswom Board, which is controlled by CPM politicos, took over the administration of Parthasarathy Temple of Guruvayur. Guarded by heavy police security, the Devaswom officials took over the temple by 4.30 A.M. like thieves of the midnight to face less protest for the unfair act. Hindu groups led by RSS and Hindu Aikya Vedi called for dawn-to-dusk hartaal in Thrissur district. Malabar Devaswom Board President is O.K. Vasu who had called for taking control of all temples in Malabar, including those controlled by the Zamorins. O.K. Vasu is a CPM leader.

To end the discussion with, if India is a secular country, then why should government control ONLY Hindu temples and not the Churches, which are the largest owners of agricultural lands?

We are giving you a little Glimpse of Mugabe’s Regime in Zimbabwe. It is Terrifying