Court Gave Him Bail, Yogi Government Nabbed him the very Next Day

Chandrasekhar Azad- this name is enough to draw people’s respect across the length and breadth of India. Whenever his name is taken, people bow their head in gratitude, remembering the valor this great brave-heart of India had shown and the sacrifices he had made to liberate India from the clutches of Imperialistic Power. People remember him not because of his religion or caste or language or for his native place, but the great service he had done for his motherland. However, there is another Chadrasekhar Azad as well. He is quite popular too, but he is popular not for his valor or altruism or his good deeds but for the violence he routinely instigates. Presenting himself as a Dalit leader, this man gained prominence for his divisive strategies that led to tensions among communities, most noticeably the Saharanpur tussles few months back.

On June 8, Chandrasekhar Azad, the prime accused of Saharanpur Violence 2017, was arrested from Himachal Pradesh where he was lying underground.

According to some sources, one of his apprentices tipped him off to Police. He had 25 FIRs registered against him for the violence that in Saharanpur from 9th till 23rd May 2017. A Special Investigation Team constituted to probe the allegations of caste-based violence in the district, had filed charge sheet against him under IPC Sections 147 (punishment for rioting), 148 (rioting armed with deadly weapon), 66A(sending offensive messages through communication service) and 153 (Promoting enmity between different groups). On November 3, the Allahabad High Court granted Chandrasekhar and his partners bail in all the cases except except 66A.

However, just one day after getting bail, Yogi Adityanath Government slapped Chandrasekhar with National Security Act, under which he will soon be arrested again. The NSA provides the Central government, State government and even the Police Commissioner the power to detain any person who is a potential threat to national security. As per the SIT, there are various other charges against Chandrasekhar and three of them are serious in nature. Amidst the arrests of rioters from both the Thakur-Dalit communities who rioted during the Saharanpur violence, the intellectual group had been accusing Yogi Adityanath of defending the Thakur community while taking strict action against the Dalits. With the implementation of NSA against Chadrasekhar, the intellectual-liberal group is livid at the CM of Uttar Pradesh.

Detaining Chandrasekhar is a preemptive measure owing to the nature of the tension prevailing in the area. The UP government has made it clear that it is in no mood to tackle the issue reluctantly.

What happened in Saharanpur?

All the information stated in this part is based on the referenced links.

The sarpanch of Shabbirpur village in the district is a Dalit. On April 14, the local administration of Shabbirpur “allegedly” denied the Dalits of Shabbirpur from carrying out a procession on the eve of Ambedkar Jayanti. Additionally, the local administration halted the installation of a bust of BR Ambedkar until permission was issued, which irked the Dalit community. On May 5, the Thakurs of Shabbirpur headed to Shimlana to attend a function held in honor of Maharana Pratap. The groups of Thakur played loud music to which the Dalits objected. An argument started which soon turned violent leading to the death of a Thakur, Sumit Kumar. 15 people were injured and 17 people were arrested from both the communities. On May 9, the Bhim Army called for a Mahapanchayat to address the atrocities on Dalits on May 5, while as per reports, people from both the communities suffered. The local administration sensed the possibility of a communal outbreak and denied the Mahapanchayat.

Bhim Army members allegedly sent out provocative, abusive and false messages over Whatsapp. The angry mob blocked roads in Rampur Maniharan, Ramnagar, Nazirpura, Halalpur and Malhipur, and hurled stones at police personnel, who lathi charged them. The Bhim Army clashed with the police resulting in the burning of a police post, torching of 20 vehicles, destruction of police documents and several stone-pelting incidents across the region in which at least 11 police personnel and a sub-divisional magistrate were injured. The protesters opened fire on the officers using country-made pistols. A few media people were also allegedly manhandled and their equipments were damaged. 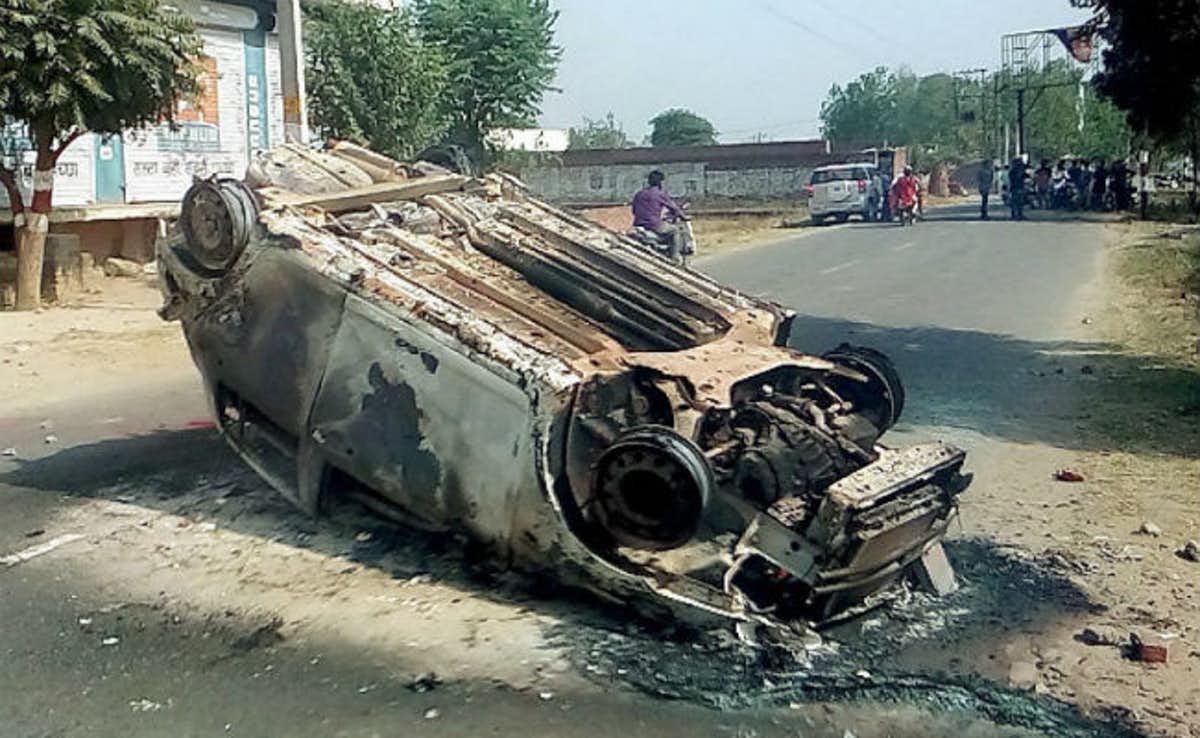 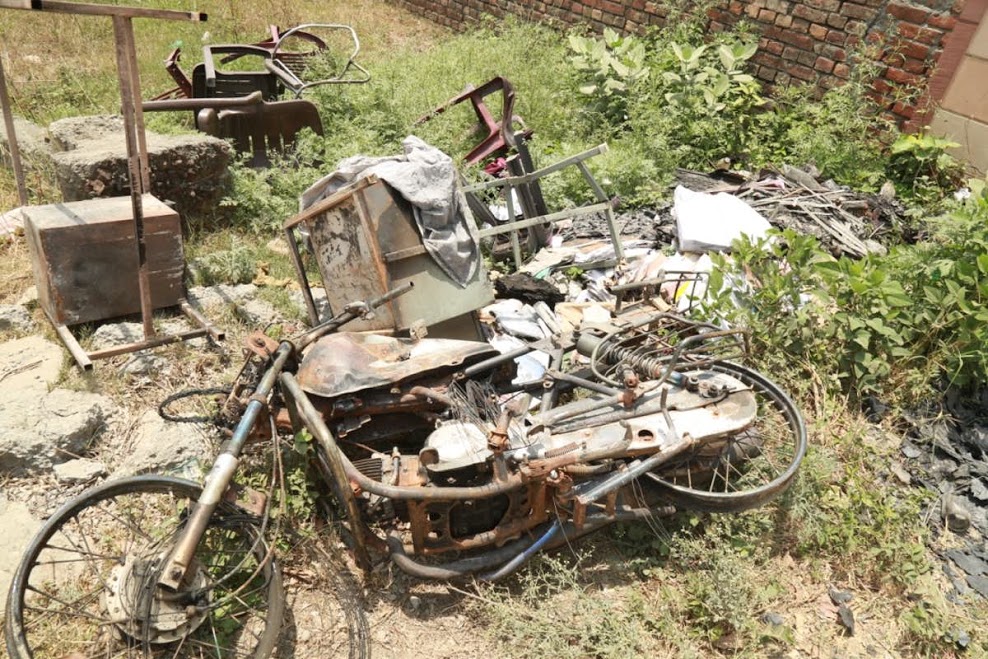 Apart from burning vehicles and a police post, Bhim Army and its protesters burned a memorial site that was being built to commemorate Maharana Pratap in Ramnagar, Saharanpur. 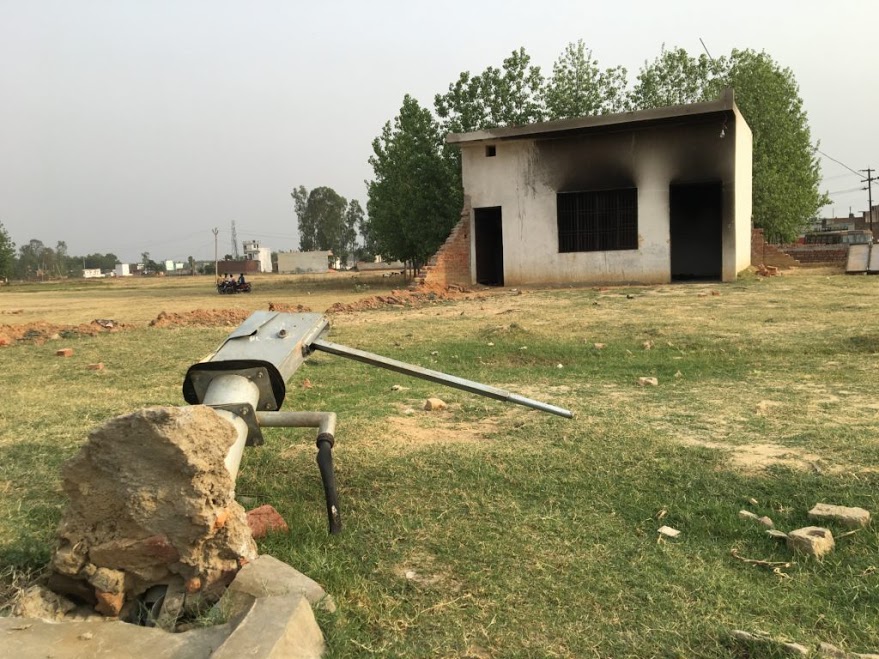 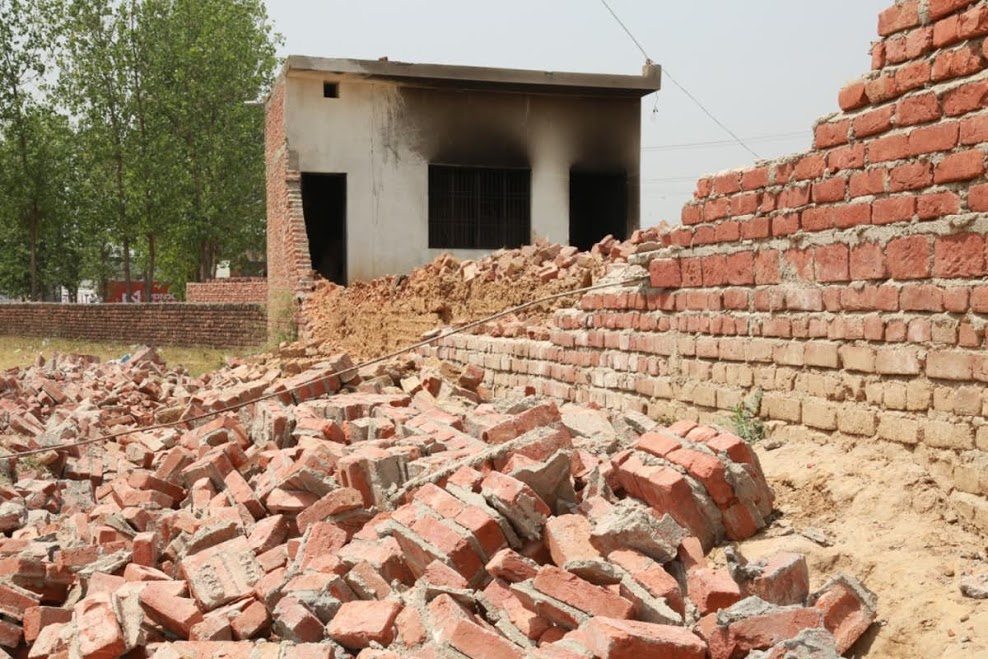 On May 23, some unidentified miscreants set fire to the homes of 12 Rajputs in Shabbirpur village ahead of Mayawati’s visit. The BSP supremo had not taken any permission from the administration for the event. After the event was over, some unidentified persons attacked some Dalits who were returning from the event. These incidents accentuated the tensions between the two communities, leading to the death of a Dalit youth named Ashish.

There is a possibility that Bhim Army might be behind these attacks.

Chandrasekhar came into prominence when he put a controversial board at his native place that reads ‘The Great Chamars of Dhadkauli Welcome You’. 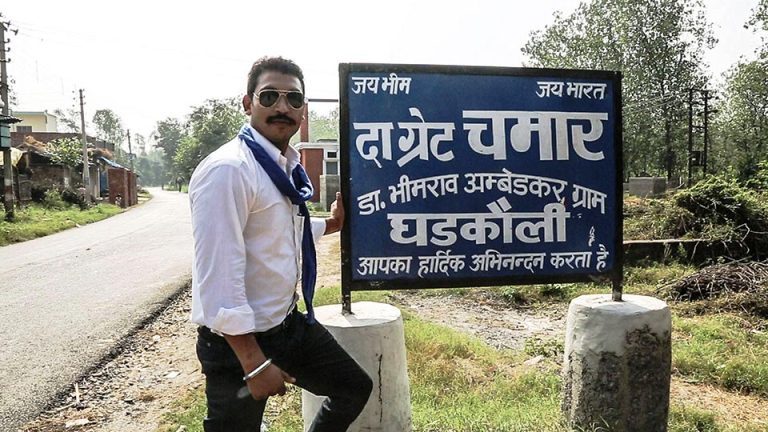 He tried to lure Dalit youths under the banner of Bhim Army. Bhim Army which was formed in 2015 with an aim of spreading education among the Dalit community, soon found iself involved in various caste violence and aggressive activities. A small group like Bhim Army became so politically prominent within a short span suggests that it may be receiving fund and support from some bigger political parties. According to the Police intelligence report, BSP supremo Mayawati’s brother and national vice-president of BSP Mr. Anand Kumar was in regular contact of Chadrasekhar through a third party. The nine pages report says that Anand Kumar had been funding Bhim Army. The intelligence wing had put 25 phone numbers in surveillance and in one phone call, a Bhim Army member was heard saying that Chandrsekhar asked them to identify a village with less Thakur population so that the Thakurs could be eliminated easily.

During June 2017, in an interview CM Yogi Adityanath made a statement where he claimed that illegal mining syndicate was behind the Saharanpur violence and funded the Bhim Army for several cases in connection with violence.

To prevent further caste-violence in the state, Yogi took the right decision of detaining Chandrasekhar by imposing the NSA.

Muslim Murders, Indian Seculars don't want you to know about

No! You CAN NOT Mock a CM in India

China has a new deal for India: The Indian Ocean is yours, but please let us have the South China Sea