Though Not a Fan of Rs. 2000 Note, Nobel Economist Richard Thaler Saw Demonetisation’s Long Term Gains. And he was eerily accurate.

by Vasudeva Reddy
in Economy
0

Richard H Thaler, a name known to not many people few days back, is the current topic of discussion in the economic circles. If you are a not-my-problem guy and unaware of Thaler name, he won Nobel Prize in Economics this year by beating our very own Raghuram Rajan in race. So what? Every year one or the other wins Nobel, how does it affect you? Frankly, it doesn’t. However his opinion on unarguably one of the biggest economic decision of independent India – Demonetisation, will help you to understand whether it was a good move or not.

On Nov 8th 2016, he tweeted, “This is a policy I have long supported. First step toward cashless and good start on reducing corruption”. Clearly, he supported the move. And, not to forget, he also tweeted, “Really? Damn” on knowing that RBI was introducing Rs. 2000 notes in place of discontinued Rs. 500 and Rs. 1000 notes. Of course it was not clear to Thaler that 2000 Note was a temporary move. 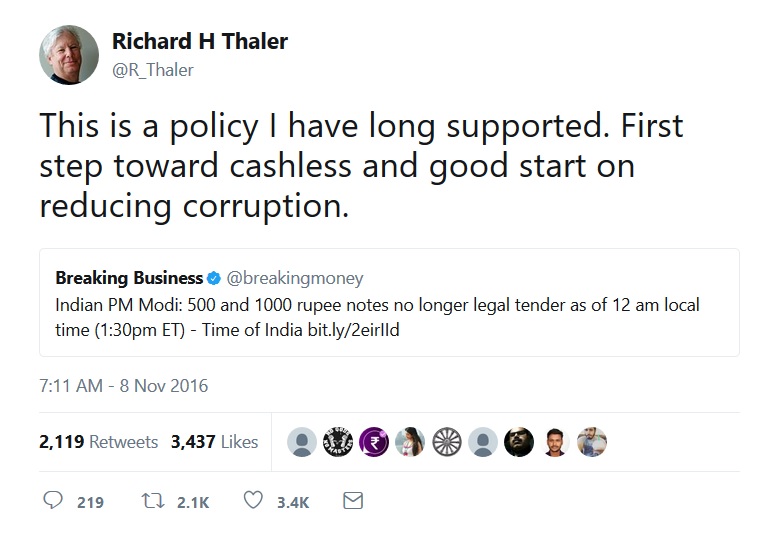 Now he may not be a God to be followed on his words or wisdom blindly, but, he is certainly better than any of those Facebook economists. Irrespective of the magnitude of its (Demonetisation) success or the failure, I guess, nobody would argue with the intention of the move. It was clear by the ready participation of common people in a drive to drain out the black money from the system. I’m a banker and I have had first-hand experience with thousands of people on a daily basis. You have to trust me when I say people were in complete support of the move and they didn’t mind standing in queue for long hours.

Despite the praise or criticism it has drawn, demonetisation was a milestone in terms of operational capabilities of our government agencies and how far they can go to meet the public demands in the times of emergencies.

But, it was chaos and inconvenience to the common people. During those 50 days, RBI released 74 notifications, more than one notification per day. Yes, it was due to lack of preparation and underestimation of troubles it would create. At the same time, government bodies functioned effectively. Government and RBI listened, monitored and responded to rapid changes at the ground levels. I guess, it was the first time in the independent Indian history that government agencies and even the government worked so effectively and amended the rules on daily basis. Information flow was outstanding, decision making was quick and implementation was rapid, it was true test to operational capabilities of banks and all the government organizations involved.

In January, our finance minister Mr. Arun Jaitley took to Facebook to say, “the period of pain and inconveniences is getting over, and the economic activity is being restored”. So, the government acknowledged pain and inconveniences people had to go through which could have mitigated or even avoided with proper planning. So, why I am talking about something that had happened 9 months ago and when world is trying to forget about that? Because, had I said the same words 9 months ago, you would have ignored them saying immature opinion. Yes, Demonetisation wasn’t very successful when you talk about monetary cost-benefit analysis. Having said that, it was not a bad altogether and calling it as a complete failure is is simply ignorance.

Demonetisation was hailed as a master stroke on black money at the time of announcement, later on war on terror funding and drive towards cashless economy was added to the list. But when finance minister on 30th August said ‘confiscation wasn’t the aim of drive but mainstreaming of economy was’, people have lost it. I know, it may look like shifting goal post to wherever the ball goes but, there was truth in the words of finance minister, at least, when it comes to mainstreaming of economy.

We should not measure the success of demonetisation by the percentage of notes returned to the system. Would you have called it a success had only 85% of notes returned to the system instead of 99%? May be. But, I would call that a myopic view. Banks were flooded with fresh funds. They have got so much funds, they have even reduced Savings bank interest rates from 4% which was same from as long as I can remember. You may ask, how would reduction in deposit rates help common man? If you take any developed country, none of the developed countries offer 4% interest rates even on fixed deposit, forget about checking accounts or savings accounts. Yes, no country automatically becomes developed just by reducing interest rates. But, there’s a logic behind that. Bank interest rates are directly linked to inflation levels. If banks interest rates are coming down, that means, inflation of that country has also come down. You can see that. And yes, lower inflation or controlled inflation is not a bad thing to have, particularly for a country like India which is poised to take on world’s biggest economies.

Lower inflation is not due to the sudden drop of purchasing power of people, but due to the reduction of exorbitant purchases made by people with hoarded money. Traditionally, many people who did big business were the ones who evaded tax and hoarded money (I’m not talking about corruption part here, so, I am ignoring salaried class). With the introduction of Real Estate Regulation Act and Good and Services Act, government strategically targeted business class. By asking people to link their Aadhaar with bank account, government is set to straighten the record of every individual of country. Government is slowly tying loose ends and closing the loopholes. We can already see the signs of change with the increase in number of direct tax payers and with millions of business units getting registered under GST which will leave audit trails of money flow. We are fast moving towards structured economy.

You may declare Demonetisation as a success or a failure, depending upon your economic knowledge and/or political bias. But, I can confidently say one thing, our economy is now better organized than it was ever before in the history to deal with black money. Most of the unorganized units which were operating under the surface have now come under GST and hence under taxation laws. No matter how much black money Demonetisation could unearth, our country is now better structured to deal with further generation of black money as almost all of the money in the country found its way back to system and locked there perennially.

A Khalistan Supporter could be Canada’s Next Prime Minister

59 People Burned Alive. 27 women, 10 children Among them. But Their Killers won’t be hanged