by Marmik Shah
in Opinions
0

No body likes to fight wars for a lost cause and especially not when the opposition has men like Modi and Amit Shah at the helm of affairs. Considering that and the fact that Ex Maharashtra CM Narayan Rane’s opportunistic past, speculation is rife about him joining BJP.

And as is known that there can be no smoke without fire, Rane met the BJP President , Amit Shah on 25th September in Delhi inviting him to inaugurate his hospital in Sindhudurg[1], soon after quitting the Congress. Having parted ways with the Indian National Congress (INC) 12 years after joining it, the BJP would be his third party after Shiv Sena and the INC.

Having risen the ranks from being a Shakha Pramukh of a suburb in Mumbai (Chembur) to being the Chief Minister of Maharashtra, he achieved it all and that too at a very young age.  Having left the Sena in 2005 to join the INC with hope that he would be made the CM again, which ultimately did not happen and having grown fed up of false promises, Rane finally quit the party very recently with the hope of reviving his political career.

It’s not now that the BJP and Narayan have been having this secret bonhomie, there have been sporadic meetings since the start of the year with Rane meeting Amit Shah earlier this year, followed by Maharashtra CM, Devendra Fadnavis visiting Rane during the Ganesh Chaturthi festival.

Rane, who had until 2015 shown his absolute disdain against the BJP and PM Modi[2] in all his interviews in the capacity of the Industries Minister and senior INC member, seems to suddenly have had a change of heart in 2017 where he praised PM Modi for his good work.[3] This change in heart is not very surprising considering the fact that the INC have absolutely no chances of coming to Power in the near future and him at the age of 65 is not getting any younger.

Although, Narayan Rane with his political experience and his stronghold in the konkan region of Maharashtra, would come to BJP (if he at all does) with a lot of baggage which might just make the whole deal very nonviable for the BJP.

To start off with, he  and his family (especially his wife – Mrs. Neelam Rane & son Nitesh Rane) have been accused of various charges of corruption and land grabbing at various places in Maharashtra.

The Sena (with whom he had started his political innings) had in 2011 filed complaints against Rane for misusing his office as the Revenue minister by reversing various plots of lands to private Individuals (from the government) and causing a loss of crores of rupees to the exchequer.

Additionally, HSBC had released a list of people who had their Bank Accounts in Switzerland and in the 1195 long list of names, Mrs. Neelam Rane and Nilesh Rane’s (heir of Narayan Rane) had also surfaced, showing that the aforementioned had accounts with HSBC Switzerland.[4] Now the question is, why would a wife and son of a Maharashtra politician (accused in corruption) have a Swiss Bank account. The answers to the above questions are obvious.

Not only that, Narayan Rane was also accused in the Adarsh housing scam that had rocked the nation in 2011[5]. Ironically, the Modi that the Rane’s are praising today was the same person whose naked cartoon Nitesh Rane (heir of Narayan Rane) had tweeted in 2013.[6] Nitiesh had also asked all those gujarati’s praising Modi (then CM of Guajarat) to go to Gujarat. 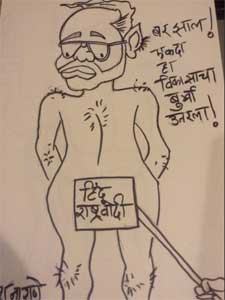 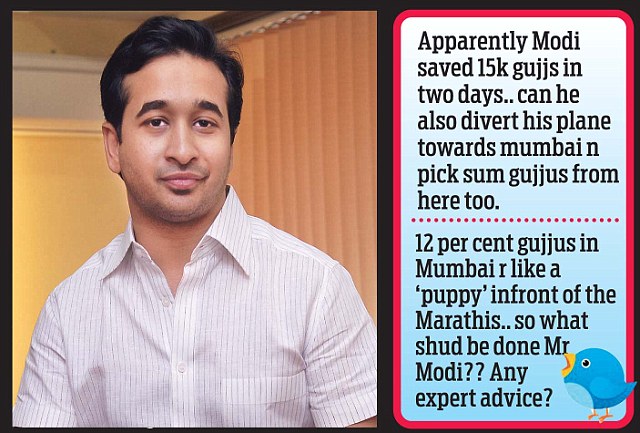 Not only this, early in 2017 Times Now[7] had broken the news showing how Narayan Rane and his family had routed vast sums of black money from various shell companies. By using the simple mechanism of ghost shareholders and bogus companies, Rane allegedly had 55 such bogus companies by floating shares for Rs. 10 face value and bought those very shares at 0.90 Rupees.

Narayan Rane with all these scams haunting him must be wishing to start off with a clean slate knowing all too well that staying put with the congress or with any other party like the NCP would only land him and his family in jail, just the same way how Chagan Bhujbal did for all of his wrongdoings.

And while a congress mukt bharat is a dream that every nationalist Indian would be dreaming to witness, inducting tainted corrupt politicians to increase its foothold in the konkan region is foolish if not suicidal. The common man today supports the BJP for all the reasons for which they should not be inducting Rane, and if they do then it would only prove that BJP is no different than the INC, when it comes to placing the party before the Nation.

The BJP is in any case is facing the music for a slow economic growth post demonetization and implementation of GST, inducting Rane at this time when the opposition is finally gaining its lost voice to criticise the BJP’s for its policies would be self destructive.

Narayan Rane floats his own political party and gives support to the BJP from outside. This to us seems like a very realistic possibility considering the low risks involved for the BJP.  The BJP has in the past also said that it would welcome anyone and everyone supporting their slogan of “ek Bharat shreshta Bharat”. Thus having Rane float a new front would serve the BJP well, since it would finally gain a foothold in the Konkan region through Rane.

There was just one way of ending Chinese Domination in Africa. And India is doing that. Beautifully.

Dear Non-Hindus, you wished to know why you aren’t allowed in the Jagannath Temple? Here’s your Answer