Dear BJP: Haryana was just the beginning, there is more trouble coming your way

by Mayura Rao
in Opinions
0

No rapist should ever go unpunished under the court of law, more so when the person claims to be a spiritual guru with a large fan following of gullible devotees. Spiritual Gurus are supposed to be torchbearers of Dharma who effect social harmony in societies but when Gurus take to dramatics and still wield the powers to generate a violent outrage through their devotees, distorting the very idea of devotion, one cannot help but contemplate if such reprehensible reactions are really spontaneous or staged?

It is no secret that politics often takes refuge under philosophical leaders making them larger than life personalities but then for a religious mob to be assembling in such large numbers and resorting to such violence that too on a 15-year-old case whose outcome was almost predictable leaves no doubt that this rioting incident was very well-planned and propped up. The recent reports of recovering AK 47, petrol bombs, 2500 Lathis and other such arsenal from the Dera Sach Souda vehicles goes on to prove the same. There is nothing wrong in religious groups forming Mutts or Deras, in fact Deras have been regarded as casteless platforms of equality for social bonding and security for the poor but the whole gung-ho about the Dera chief’s dirty department raises questions as to how any religious group could get access to arms and arsenal. Was there any political angle to it? Who would benefit from such mass disruptions and halting of public life? Why would a ruling government willingly let loose mobs to run amok when their own administrative acumen would be at stake and under the hawk eyes of the media?

With some Congress men even tweeting that this violence should go as a warning to the BJP if they even dared to touch the Gandhi or Vadra family, it may not be premature to say that like the farmer’s protest in MP that was hijacked by the Congress goons, even the Panchkula rioting incident appears to be orchestrated by the Congress as their stalwarts are involved in several land grabbing cases here. Apparently the Khattar Government has been pursuing all illegal land grabbing cases of the Vadras, it is another speculative thing if any politician in India will ever go to jail for a full term.

The speed with which the media demanded Khattar’s resignation when a 14-year-old rape case that was dangling in the air under congress rule is taken to its logical end under the BJP makes Congress’s and their lynched liberals’ frustration evident. Remember there was no such ask by the media when Bengal was burning. 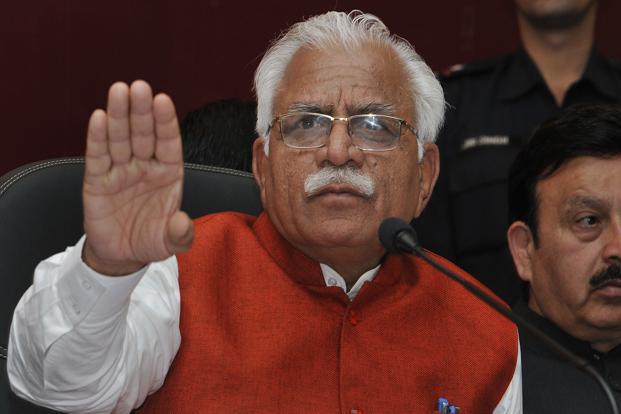 The British encouraged formations of newer cults of secularism all along starting from Bramho Samaj, Sai Babas, Dera etc alongside missionary activities.  Whatever be the intentions of such newer introductions and propaganda, Indians have absorbed and adapted them all into their indigenous cultures as their own but what is intriguing is the fact that although India has always been the land of sadhus and sanths who reformed and rejuvenated our societies it is only in recent times that Sadhus are able to mobilize chaotic mobs leading to killings of their own followers.

Such mob mobilizing is witnessed not just for a Ram Rahim but also on the calls of radical Maulvis or Padres who have in the past instigated riots against the system. Be it the Christian mischief of alleged Church attacks in Mangalore or Orissa or the recent communal violence and rioting in Bengal where instigated mobs stood blindly with their masters who whip their minds and inflict their subterfuge political agenda making it into rabid religiosity.

There is more trouble coming BJP’s way and It is for this reason that the BJP has to forcibly penetrate the ugly communal religio-political empires built during the Congress regimes to neutralize not just political mileages but to contain the separatist dance of division politics from disintegrating the society into warring groups against the system. Since the damage is already done as this identity politics has seeped deep within. It has become a dangerous mind game today as it starts off with the poor and then percolates amongst the privileged, brewing its ugly portion of separatism across all classes. And in this identity politics while the media hyperventilates on only Hindu saints, carefully choosing to ignore all misdeeds of Maulvis and Padres, some right wingers today seem to play down the theatrics of the Baba and deem that he was a centrifugal wall against Christian conversions in the Punjab and Haryana regions, fair enough if evangelical activities are eating into our societies, let us demand for a categorical ban and a strict constitution legislated against missionary activities but until then should we convolute the integral aspects of Dharma fearing Christian conspiracies and stand beside a bogus baba is left for everybody’s introspection.

Punjab and Haryana have always been a concoction of Congress/Akali/regional party strongholds that plunged the state into drugs and cultural debauchery during their regimes largely because of maladministration with no inclusive growth. The lack of opportunities coupled with cultural bankruptcy of an impressionable group has been well encashed by replacing the absence of modern administration and facilities with liberal dozes of celluloid and crass Rap cultures.

It is no co-incidence that the all in Baba who donned ridiculous Gladiator like costumes, playing a lover, a macho with those trendy bikes, becoming a hero, a savior in all his avatars via films, sports, music and drama served like a bespoke design to pull and engage those gullible crowds (read vote banks) with absolute ease.

Baba Gurmeet Ram Rahim has been an ardent Congress supporter for a very long time and it was only recently during the 2014 change in the political wave that he chose to drift along the sweeping tides of the BJP or at least that is what was announced although numbers don’t indicate the same.

His conviction could have come much earlier during the Congress rule if only there was a political will to duly deliver justice but Congress being Congress can only do what it is best at – to aggravate and orchestrate administrative lapses only to score brazen political miles at the cost of 30lives and 300 innocent injured victims and a whole lot of damage to public property.

But the BJP that is scrambling to contain and cut into a Congress eco system of communal politics and violence will be better off by being equally ruthlessly prepared for all such future charade of chaos with more astute, affirmative and agile administrative demonstrations because we live in interesting times where on one hand we have people taking out candlelight marches to see that the rapist is convicted and then there are those who petition for the mercy plea of the rapist and then there are those who burn down towns when a rapist is convicted.

Spiritual leaders are essential illuminating torch bearers for our societies who aid in upholding the Dharmic quotient without any limelight but when affinities and ideologies of the perpetrator of the crime becomes a determining factor to ascertain the gravity of the very crime then it is evident that there is more politics to it than any acclaimed philosophy. And all such philosophy of Babadom or Maulvidom or phedophile Pastordom should be ruthlessly shunned.

YES! SACK KHATTAR, but forget the following things. Forget them for Next 15 Years

Mayura Rao is a Freelance Creative Writer and a passionate blogger, a travel freak and humor buff who believes in vehemently voicing out the hypocrisy prevalent around us.