by Sanjeev Singh
in Culture
1

On this auspicious day of Ganesh Chaturthi, let us try to understand our cute friend Ganesha at an esoteric level. Hidden in the story of Ganesha is the secret of attaining, and more importantly, retaining material wealth, prosperity, Health and Spiritual enlightenment.

It is indeed a norm to first pray to Ganesha before the start of any worship simply because Ganesha is synonymous with stability.

When you worship you would want the effect of worship to stay with you even after the worship has ended. And the greatest stability comes with the stability of mind, Ganesha’s head of an elephant denotes exactly that.

Lakshmi is fleeting; wealth has the tendency to get rapidly exhausted if the mind of the acquirer is not stable. This is the reason Lakshmi and Ganesha are worshipped together. And the correct way to visualize in the worship is to welcome wealth in the form of Lakshmi and request it to stay put and stable in a household by visualising Ganesha residing with Lakshmi. The two consorts of Ganpati are Riddhi (material prosperity) and Siddhi (spiritual power) and the children are Shubh (auspicious) and Labh (Profit or fortune). Thus With the grace of Ganesha comes Buddhi (intelligence), one of the names of Ganesha is Buddhipriya, with intelligence comes Material and spiritual wealth which in turn results in auspiciousness and Good fortune.

Krishna calls a person blessed with Stable mind in Geeta as “Sthitapragya” – A man whose doesn’t go mad with happiness when Good happens and doesn’t break down into pieces when life throws sufferings at him. Only that man is the “Adhikari (the deserving)” of enjoying both material pleasures and Spiritual heights. He enjoys the world as a yogi and not as a Bhogi. Bhogi becomes a slave to desires while a yogi enjoys pleasures of the world and beyond with a sense of ownership.

A yogi can do that because he has controlled his mind, indeed his sense perception has gotten so much finer that his enjoyment of pleasures is far deeper, while a bhogi can’t even enjoy the world properly because of his fragmented mind and thus forever remains a slave to the senses. The trick is to be mindful, and elephant is an important symbol of memory and mindfulness not just in Hinduism but majorly in Buddhism and some parts of Jainism. Mayawati’s election symbol elephant is due to its significance in Buddhism.

The hidden meaning behind the episode of Shiva removing Ganesha’s head.

The story goes that Mother Parvati had saved the residual dirt from her skin and created a son out of it. Mother is Shakti, what would be residual dirt of Shakti? It’s the human vikaaras; Kaama, krodha, moha, lobha etc. These are shaktis too, but polluted by ego. The seat of ego is the mind. it is the mind that says, I am, I demand respect, I want this, I don’t like him/ her. It’s I, I, I… Krishna calls it mamatva, when one wants everything for himself because of the ignorance created by maya which has shrouded one, ever-present consciousness into a zillion forms. And we pamper these egoistic tendencies within us as they were our own children. 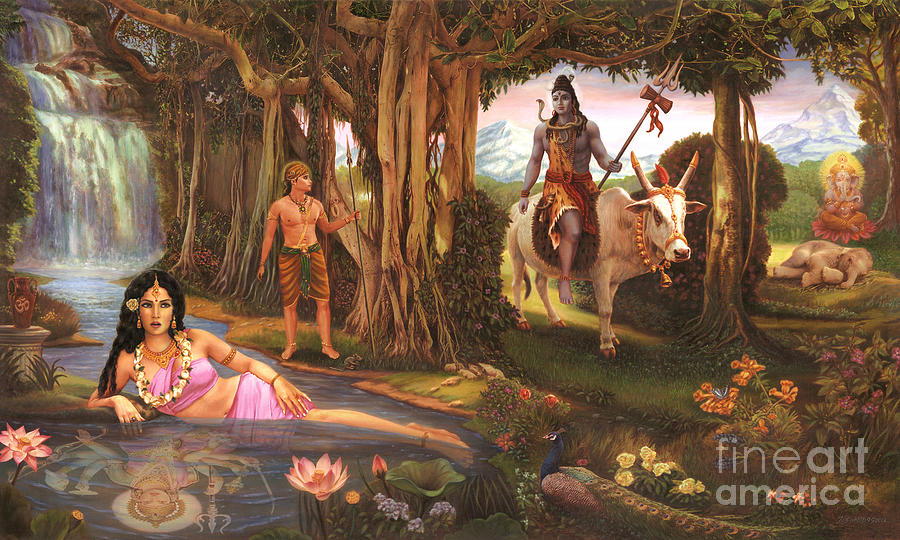 Any person at a given time is a combination of the three Gunas. Only when the 3 Gunas are balanced can the stability of Mind be really achieved and a man becomes sthitapragya.

Let us understand the dirt of Parvati. For example the sexual energy, Kama. It is the same energy when moved up through Kundalini Yoga, pierces and activates the various chakras in our bodies and gives us material and spiritual powers. The energy is one, when it moves down towards our sex organs it draws us towards animalistic pleasure, when it’s moved up, it turns a man into God.

Similarly Krodha(anger), it’s a pure, powerful energy within you that has turned into anger because of corruption of our vrittis or thoughts, it cannot be destroyed, only transformed. Thus Shiva doesn’t burn Ganesha to ashes, the purpose is to direct the energy into the right path, and this can only be achieved when our Mind is stable. Thus Shiva places the head of Elephant on Ganesha. Our body is a temple and the seat of Ganesha is in the muladhara, the base of the spine, where he sits with the Sleeping Kundalini Shakti. Thus the story of Parvati and Gansesha Staying together. Father Shiva, seated in the crown Chakra at the top of the head, the shahashrara, or Kailsha” topmost point”. The muladhara Chakra is the earth element, earth is Heavy and Stable, depicted by again, Ganesha.

Ganapati Atharvashirsa says thus: “You continually dwell in the sacral plexus at the base of the spine [mūlādhāra cakra].”Thus, Ganesha has a permanent abode in every being at the Muladhara. Ganesha holds, supports and guides all other chakras, thereby “governing the forces that propel the wheel of life”.

It’s clear that for both Material and Spiritual success one has to be to first invoke the Ganesha within. Ask Ganesha for Buddhi, Riddhi and Siddhi. He is the vignaharta – The remover of Obstacles, Ganapati – the guide of Ganas (people). And he sits within us all.

BJP Validates the authority of Teresa – a fanatic Catholic missionary