Let bygones be bygones, Tarun Tejpal can be absolved

Has the time come to reassess our response to the Tarun Tejpal THINK brouhaha now that the need for strong liberal voices is called for? In retrospect, the relentless media campaign that shredded the once darling of the intelligentsia could be regarded as excessive.

Welcome to the world of Liberalism. Here, priests of the Holy Church of Liberalism protect each other, work together to shape public discourse, conspire to whitewash the crimes of its members to prevent the dispensation of deserved justice and strut around with all the morality that only a belief in the divinity of their own self could provide. When any of its members are faced with the prospect of righteous justice, the holy staff is flashed which radiates with all the authority of the church and the machinery is set in motion to dismiss all allegations of criminality.

In an era of global scepticism of the divinity of Liberalism, the Council of High Priests has overwhelmingly overestimated its power. After suffering a series of setbacks since the summer of 2014, the Council is desperate and in its desperation has lost its ability to gauge the mood of the public and in its arrogance has committed a series of errors which has exposed the devil that resides in each of them.

And thus it came to pass that one low ranking priest of the Church, Malvika Sanghvvi, decided to preach against the relentless trauma that her superior has been condemned to. But unfortunately, the Force was not strong with her. And her co-religionists did not take kindly to the fact that the Ideology was besmirched in an attempt to whitewash the crimes of a person who brought shame to the Church. The sectarian divisions ingrained within Liberalism as with any other religion flared up as one sect claimed superiority over another.

In her sermon, Malvika Sanghvvi appealed to adherents of her dogma to forsake the differences they might have had with Tarun Tejpal, a senior member of the Council of High Priests, for the forces of the Great Other were getting stronger by the day and circumstances demanded that all adherents of the Faith rally behind the Priests so that apocalypse may be avoided. She implores that the Church was too harsh in its treatment of one of its most faithful devotees who had been such a great servant of the Faith up until then. Malvika Sanghvvi argues that it was in poor judgment when the Church decided to unleash its righteous wrath on Tarun Tejpal. It was a tactical mistake which provided the forces of the Great Other with a glorious opportunity to register another thumping victory at their expense. Let bygones be bygones, she says, it’s time for the Church to embrace its servant again with open arms. The servant had suffered enough, the servant had received righteous justice for the errors in his ways but now that the forces of the Great Other were knocking at the door, it was time for them to admit the disenfranchised warrior of the Holy Faith again in its ranks. 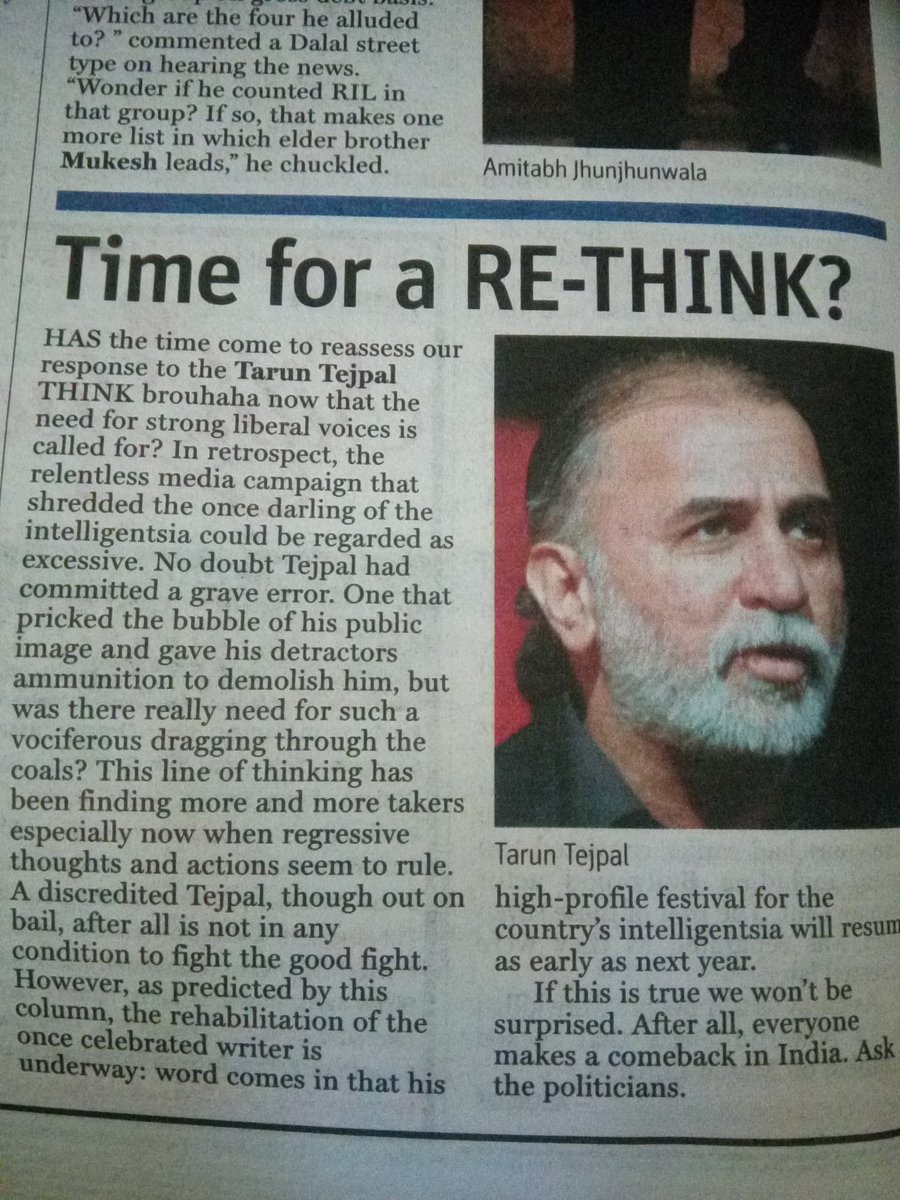 The highly decentralized structure of the Holy Faith makes it difficult to predict whether Malvika Sanghvvi acted of her own volition or was she under the influence of a higher ranking official of the Church who does not seek to register himself in the minds of the masses. Her low rank within the Church makes the idea of her acting as a Lone Wolf hardly credible. Quite possibly, Malvika Sanghvvi was provided some incentive to risk her reputation in public space. However, considering the ramifications of her actions, one is inclined to think the reward was not great enough to compensate for the humiliation.

Since then, a remote section of minions in the ranks of the Church have gathered around Tarun Tejpal to try and salvage at least some honour from the sermon gone awry. Pawns like Malvika Sanghvvi can be found in debates across news channels, trying exceptionally hard to serve their little circle of influence, but with resigned expressions on their faces which clearly signify a lost cause.

The Council of High Priests has decided the interests of the Holy Faith would be compromised should they throw their weight behind Tarun Tejpal. The Council had to beat a hasty retreat when they involved themselves in the quest to rescue R.K.Pachauri and the memories still leave a bitter taste in their mouths. Hence, the Council has decided to refrain from interfering this time as it has realized Tarun Tejpal has passed well beyond their circle of influence. The Council has decided to lie low till it is strong enough to cast its influence to foreign territories once again, as of now, it’s better to live to fight another day.

The sectarian fissures within the Holy Faith has really flared up with the issue. Arnab Goswami, harped on in his synagogue that the people trying to whitewash the alleged rape of an innocent by calling it a ‘Grave Error’ in the name of Liberalism are not true Liberals at all! They are pseudo liberals! Honorable Guests preached how it is illiberal and not a liberal value to protect rapists and harm the cause of victims. Quite amusing it is, then, that even in an argument about protecting Rapists, the name of the Holy Faith must not be sullied. The Holy Faith is beyond all criticism, beyond all imperfections.

While care has been taken to protect the Holy Faith, the Council of High Priests however has suffered yet another massive blow. While they still continue to hold sway in the Corridors of Power, they have decidedly lost their ability to sway public opinion. With the masses consolidating forces of the Great Other, the days of the Council are evidently numbered. As for ordinary people like us, Rape is a crime that must not go unpunished. There is only one place in this world that a Rapist belongs in and it is called prison. And it is satisfying that the Satanic Council can no longer protect its members from Social repercussions although its tentacles might still spread enough to secure a life for its servant outside prison.