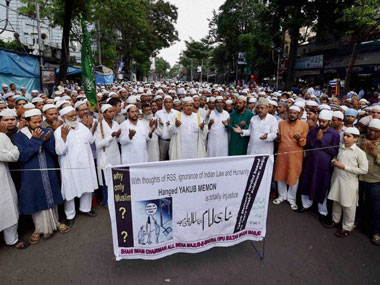 To the Hindu Fascist Government of India,

A couple of days ago, you hanged one of India’s most loyal sons. I, and I am sure, many responsible, liberal citizens of this secular, democratic nation were outraged by this great travesty of justice. It is a sad tale that even after 22 years of prolonged hearing, our judicial system was unable to arrive at the right judgement. It is a known fact that your Home Minister rushed to the President to ask him to reject Yakub Memon’s mercy petition and ensure that justice was denied to poor, honest Yakub Bhai. News reports from across this secular nation indicate that thousands of secular-hearted Indians could not sleep on the night of Yakub Bhai’s hanging, troubled as they were by what these ominous signs portend for our secular-liberal nation. Surely, the Hindu fascist government that leads this country, has committed a grave sin by hanging one of India’s greatest patriots and has exposed its communal mindset once again. However, one must always be an optimist. As an avowedly secular, modern, liberal, I demand that the Hindu fascist government that rules at centre, take the following steps to reinstate the confidence of the masses in our systems and institutions-

1. Reservations must be implemented in our process of judicial sentencing. By that, I mean that if Hindus make up 80% of India’s population, 80% of those who are sentenced to death must at all times be Hindu. Similarly, if Muslims make up 15% of our population, not more than 15% of all those who are sentenced to death must be Muslim. If this rule is not adhered to India will lose the moral right to call itself secular among other nations of the world.

2. Criminal cases pertaining to minorities must be heard by the Courts a minimum of 5 times. For example, if a member of the minority community is accused of a crime, his case must be heard in the following order: Lower court->High Court->Supreme Court-> President->Lower Court->High Court-> Supreme Court->President and so on for a minimum of 5 iterations. If during any of these steps, the accused is found Not guilty, all hearings must be suspended immediately and the accused must no longer be subjected to further appeals in higher courts.

Read: These should be the new role models for media

5. Days of martyrdom of modern patriots- Yakub Memon, Afzal Guru, Ajmal Kasab must replace religious holidays such as Diwali, Dusshera, Rakhi from the government calendar. This will promote a better understanding amongst citizens of the country.

6. All members of the majority community, accused of crimes, whether proven or not must be handed out the strictest punishment immediately,as a proof of this Hindu Fascist government’s resolve to repent Yakub Bhai’s judicial murder.

It is my firm belief, that the present Hindu fascist government can redeem itself in the eyes of the secular majority of this nation only if they implement the above recommendations immediately without delay. Should they fail however to do this, they would reinforce the belief that this government is a Hindu fascist, communal administration that intends to oppress the minorities of our nation and betray the lofty secular ideals that form the cornerstone of our national identity.

Now that Yakub is dead, who will be the next role model for our media journalists?

Nehru and Tryst with a Terrorist…