Mediocrity, not India’s homophobia, is the reason for your failure Ayushmann Khurrana

by Paurush Gupta
in Cinema
0

Ayushmann Khurrana controversial comment: If self-destruction is art, then Bollywood lackeys are Picasso of it. In a real sense, their art can only be matched by someone of the stature of the Congress party but that’s a different story. In Bollywood, some individuals became Superstars but then there are some innocent champs who crave to become superstars. With their actions, it seems like these wannabe superstars are living in the stone age.

They haven’t grasped the changed reality of Bollywood. Evidently, at a time, when the established SUPERSTARS have been getting a thrashing of their life by the disappointed audiences, Ayushmann Khurrana has been running pillar to post claiming that he has become a STAR.

Success is private, Failure is public

Ayushmann Khurrana-starrer movie ‘An Action Hero’ is scheduled to hit the theatres on the 2nd of December. For that, he has been giving interviews to various Bollywood media portals. In a promotional event, the so-called star dissected the performances of his past movies. He also addressed the failure of his last three movies namely Doctor G, Anek and Chandigarh Kare Aashiqui.

But to be honest, in all his interviews, he just passed the blame for his failures on society at large. In an interview, Ayushmann argued that taboo subjects only worked commercially in the pre-pandemic era. He also highlighted the fact that he started his career with movies on taboo subjects.

Later, in the interview, he added that considering the subject of his movies, they need wider audiences and need to have community viewing. Further, blaming the country for his failure, he termed India as a homophobic country.

Reportedly, on the repeated failures of his movie, he stated that his last three films, including the LGBTQ film (Chandigarh Kare Aashiqui), didn’t do well commercially because, unfortunately, our country is homophobic.

Interestingly, on the question of whether failures affect his confidence or not, Ayushmann Khurrana had a boastful answer. Arrogantly boasting about his risk-taking ability, he stated that he is unshakeable and that if he stops taking risks, he would become conventional.

He added that he has always been unconventional, and he consciously makes those choices and would do so in the future regardless of success or failure.

Read More: Ayushmann Khurrana – An actor who gracefully disgraced himself

There is a fine line between arrogance and self-confidence. With repeated boastful statements and blaming everyone except himself for his failures, Ayushmann Khurrana has been displaying his sheer arrogance. 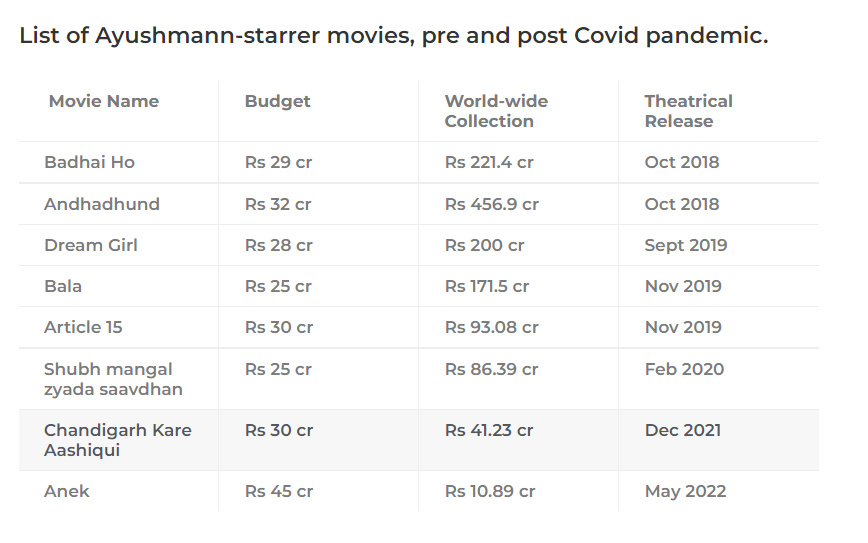 The above table categorically highlights a pattern in itself. It clearly states that post-pandemic, Bollywood is going through scrutiny and the taste of audiences has evolved greatly.

Now, it’s time for Bollywood to realise that they can’t get an easy pass with earlier successful templates like ‘Bhaigiri’, ‘Patriotism’ or ‘UNCONVENTIONAL stories’. Instead of blaming the public and calling India homophobic, Ayushmann Khurrana should understand that rather than any template, the movie should have substance and quality content. He no longer enjoys easy passes in the name of off-the-beat topics.

Otherwise, three flops can soon turn into five flops with the possible failure of his upcoming movies An Action Hero and Dream Girl 2 on account of his bad-mouthing of the public and the nation. If that happens all this gloating about unconventional choices will leave him at perils and he will be eyeing his cinematic end.

2013, Lily Thomas Vs. Union of India: The case that turned to be a nightmare for corrupt politicians