by Abhishek Kumar Singh
in Geopolitics
0

When Israel was established as a state in the 1940s, the biggest problem for it was to gain acceptance. The problem was solved by Harry Trueman, the American President. After that, countries under western influence gladly accepted Israel as a sovereign state. During the same time, Pakistan attempted to assimilate a part of Kashmir under its administration. However, getting legitimacy for its forced occupation has turned out to be putting water on the duck’s back for Pakistan. Its problems have now been exacerbated by Russia accepting PoK as Indian territory.

Recently, Sputnik, a Russian state-owned news agency released an infographic on Shanghai Cooperation Organisation. The picture in the infographic gave a full description about SCO’s expansion throughout the years. On the world map, it showed members connected with SCO as participants, dialogue partners and observers. It was encouraging to see Iran and Belarus lined up for joining the organisation. 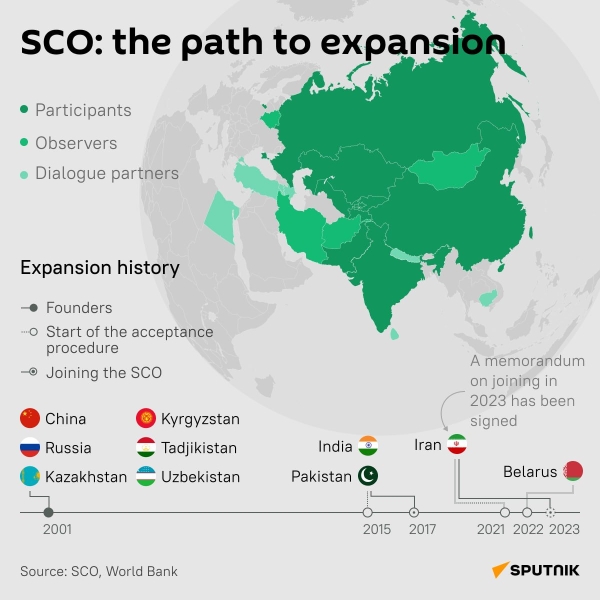 However, what drew the attention of the audience was the status of Pakistan Occupied Kashmir in SCO. According to Russia Sputnik’s infographic, PoK is a part of India. Yes, PoK was not shown as part of Pakistan. If that was not enough, even Akshai Chin was shown as part of India. Showing both territories as part of India in one go is possibly the most unprecedented event in the history of politically independent India. No wonder, only people loyal to alpha male like Putin could execute it.

Why would Russia do it?

Now, the question is why was it done out of nowhere? I mean, at the current juncture of time, it does not make much sense for Russia to tilt towards India. Simply because, India is already its foremost strategic, military, energy and now economic partner.

Moreover, Pakistan has also not treated Russia with much disrespect as it had abstained from voting against it in the United Nations General Assembly. Russia could simply maintain the status quo on Kashmir and would have continued calling it a bilateral issue. Why would Russia dissuade Pakistan, a potential partner when it is still some time for it to fully recover from the sanctions regime?

Well, once again America is the reason behind this sudden change in stance. Apparently, the geopolitical jostling over Ukraine has resulted in South Asia, Europe and America having multiple rounds of deliberations on the Kashmir issue. Let me explain.

Tracing it back to the origin of Ukraine crisis

As soon as the first Russian troop landed on Ukrainian soil, the west started to mount its sanctions on Russia. It was a good move for a brief period until they decided to lurk on their colonial hangover. In order to galvanise the whole world against Russia, they pressured countries like India, its developing partners and even China to side with them. Naturally, Trump has distanced China from America, so it was never going to agree and in fact did not.

For them, the next obvious answer was India. By getting support from India, they could get smaller countries under India’s sphere of influence. Mind you, this is not a small number. The list includes the whole of Africa as well as countries in the Indian Ocean Region antagonised by Xi Jinping’s needless adventurism.

But India just refused to compromise with its own interest. Time and again, EAM Jaishankar left no stone unturned in reminding the west that they are alone in paying for their own mistakes. India sided with Russia, if not overtly then certainly its actions indicate that.

Meanwhile, Pakistan also wanted to be on the same terms as India. It needed Russia for wheat and other stuff. On one hand, it needed the USA for supporting its terror factory. However, that is rarely possible for country having a reputation of terrorist nation. Its veil was soon out when Ukrainian troops were found using Pakistan-made weapons to kill Russian soldiers.

Within hours of the sensational revelation, the Putin administration simply cancelled the deal for selling wheat to Pakistan. Though, Pakistani newspapers shielded their government by showing it as Pakistan’s decision. If that was the case, Pak would not be looking to buy wheat from Russia.

Putin’s decision was the final push Pakistan required to be tilted towards the west. The camouflage was out now and Pakistan’s floods played a catalyst in it. Pakistan went to every forum to get billions of Dollars in aid for itself. It helped them get closer to the USA since the USA was looking for a country to threaten India of consequences for siding with Russia,

2 months of bonhomie for Pak and west

The US had already set a base by opening the exit door for Pakistan from the FATF grey list. It decided to add on to it by offering more assistance to Pakistan. For Pakistan, Kashmir is a more existential issue than existential crisis affecting its citizens. It decided to channelise the outpouring sympathy due to floods towards Kashmir. It did not take long for Americans to provide the F-16 fighter jet’s fleet sustainment programme worth over $ 450 million to Pakistan. Americans claimed that it won’t be used for terrorism but even they knew what rubbish they were talking.

Within a few days, it became clear that America was tilting towards Pakistan on Kashmir. Germany, its second most junior partner in the European Union, aired its view on Kashmir and asked for the UN’s intervention on it. Then Donald Bome, American ambassador to Pakistan went on to use the term Azad Kashmir for PoK.

It was clear that the West and Pakistan were inching closer to a deal. The United Nations General Assembly was near. The whole of west wanted Pakistan to vote against Russia on the issue while in return Pakistan would get support for its Kashmir agenda.

It is here that the West failed to remember the backstabbing nature of Pakistan. Pakistan simply abstained from voting against Russia in UNGA. The whole of west was stunned. Their faith in America went further downhill. On its part, the US tried to course correct by giving no space for Pakistan in its NATIONAL SECURITY STRATEGY document. Biden even went on to term Pakistan as the most dangerous country.

While Pakistan’s abstention ended up deteriorating its terms of engagement with the west, it had no effect on India’s relations with the both West and Russia. The prospects of new BRICS currency are more than ever and Russia does not want to scuttle over its stand on a failed state like Pakistan.

Russians are in a mood to move away from terrorist nation. Imran Khan has already warned about further disintegration of Pakistan. Russia won’t jump on a sinking ship. India should cease the day and as Home Minister Amit Shah promised, get PoK under our formal control.