Busting the fake news around GST on funeral services

As soon as the rate change in GST was announced by the Modi government, it became an opportunity for people to spread negativity surrounding the reform. Jairam Ramesh, an erudite Minister of the UPA era levelled charges on the Modi government for imposing GST on crematorium services.

5. Why should not the poorer consumers aspire to buy pre-packaged and labeled goods?

6. The Modi Government is penalising aspiration and a desire to buy more hygienically packed goods

7. Go through the list. The GST on crematoriums has been increased to 18%!

Shailendra Choudhary, the National media coordinator of the Congress party also amplified his concerns about the unverified rumours.

Later, various other individuals supposed to fact-check before putting forward their concerns too became willing participants.

18% GST on Crematorium…
As if people are dying to pay tax!

No matter what, everyone has the burden of #ModiGovt 🙏 pic.twitter.com/2Fs49iTRQq

All of these assertions were based on one tweet by All India Radio (AIR). On June 29, the radio broadcaster tweeted about the rate hike on work contracts for roads, bridges, railways, metro, effluent treatment plants, and crematoriums. The tax rate was increased from 12 per cent to 18 per cent.

In the meeting GST on LED Lamps, lights & fixture, their metal printed circuits board is raised from 12% to 18%. Solar Water Heater and system GST raised from 5 to 12%. Works contract for roads, bridges, railways, metro, effluent treatment plant, crematorium etc. up by 12 to 18%.

Rate on construction has been increased

Notice carefully, the rate has been increased for work contracts and not crematorium services. Work contract in fact can be roughly translated to be a part of the construction sector. It has in fact been defined in Section 2(119) of the CGST Act, 2017. The Section reads as, “works contract” means a contract for building, construction, fabrication, completion, erection, installation, fitting out, improvement, modification, repair, maintenance, renovation, alteration, or commissioning of any immovable property wherein transfer of property in goods (whether as goods or in some other form) is involved in the execution of such contract.”

In other words, if someone is trying to form a new crematorium, or alter the design of an existing one, trying to add new pieces of equipment to the place, or doing stuff like modification, improvement, or any other change which could alter the look of the particular area without altering the core function of the place, which is giving respect to the deceased soul, only then 18 per cent tax rate will be charged. This is nothing new and was never a bone of contention in the past as the earlier tax rate was 12 per cent.

Crematorium services are free of GST

Moreover, the astounding fact is that Crematorium services are, in fact, not subject to any GST. Section 7 (4) of Schedule III of the GST Act, 2017 exempts these services from GST. 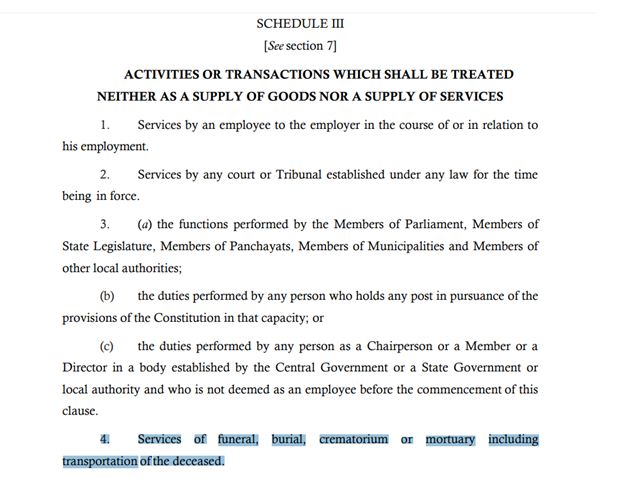 Claim: There will be 18% GST on Crematorium Services.#PIBFactCheck

▶️There is no GST on funeral, burial, crematorium, or mortuary services.

▶️In this reference GST @ 18% is only applicable for work contracts and not the services. pic.twitter.com/7HE2MPMs1s

It is amply clear that facts do not support any kind of rumours about GST on crematoriums.

Shamshera and Brahmastra: The career of Ranbir Kapoor and Bollywood hang by a thread