by Paurush Gupta
in Analysis
0

Elections in India are a routine affair. The results of these elections decide the future course of action, both for the government and the opposition. The same holds true for the recently concluded Presidential election. Analysis of the election result suggests that there is a strong mistrust between the opposition parties. It exposes deep fissures in the opposition unity. These developments hint that the ruling party may face little hindrance in the upcoming general elections. So, let’s analyse the main takeaways from the inevitable win of the NDA candidate.

Larger narrative of the Inevitable win

The numbers were never in favour of the opposition yet they kept on trying their luck. These odds were further marred by the announcement of TMC leader Yashwant Sinha’s candidature. The support for NDA President candidate Droupadi Murmu kept on swelling from the day of her candidacy. Even the non-NDA parties rallied before Honourable Droupadi Murmu fearing the tribal votes in their states. 21st July saw the culmination of this inevitable outcome. The Election Commission formally announced NDA candidate Droupadi Murmu as the President-elect of the Republic of India.

NDA's Presidential candidate #DroupadiMurmu officially declared as the President of the country pic.twitter.com/QQOGYLigS6

Also Read: This is why we need Droupadi Murmu as the President of India

With the win of Droupadi Murmu India scripted history with the First tribal woman becoming the President of India. However, in terms of political significance, the minute details and the voting pattern dominated the headlines. Analysts went on an overdrive to know the real extent of cross-voting that amplified the victory of Honourable Droupadi Murmu. It was interesting to note that NDA candidate Droupadi Murmu defeated rival candidate Yashwant Sinha in just three rounds. She registered victory with a tally of 6,76,803 votes in her favour. Her Opponent Yashwant Sinha could not put up a decent fight. He could only bag 3,80,177 votes.

The question now arises how the NDA stretched its thin majority to a whopping 64.03% of votes bagged by its candidate.

Also Read: Scam 2022: The Yashwant Sinha story, and how TMC made a grand fool of him

It has been seen for a long time now that there is a strong disconnect between the parties’ high commands and situations on the ground. The local representatives, MPs and MLAs have to work within their constituency. They understand the voice of the people. Respecting public sentiment, largely in favour of Droupadi Murmu, MPs, and MLAs rose above partisanship. According to news reports as many as 17 MPs and 126 MLAs violated their party lines and cross-voted for the NDA candidate.

In the JMM-led opposition state Jharkhand, NDA secured 10 extra votes other than JMM, BJP and independents. Similarly in Gujarat, its tally shot up by 10 extra votes.

In Assam, the NDA candidate bagged 22 more votes than the combined strength of its alliance in the state assembly; its state tally went on to 104 votes.

The President is elected indirectly through a secret ballot. This secrecy hinders from analysing which party suffered the most cross-voting and which MPs or MLAs went against their party line. However, it can be categorically noted that in three states, Opposition candidate Yashwant Sinha could not even open his tally. Not even a single MP, MLA from Andhra Pradesh, Nagaland and Sikkim had faith in the opposition and its candidate Sinha.

While President-elect #DroupadiMurmu got a vote in all states, Opposition's Presidential candidate Yashwant Sinha drew a blank in Andhra Pradesh, Nagaland, & Sikkim. pic.twitter.com/QTVtiRqBYS

Apart from this, all the smaller regional parties, MPs and MLAs endorsing NDA’s candidate demonstrate that they do analyse the tilt and reality of current politics. They have realised that the opposition is a shrinking ship. It is a divided house with ego battles going on among themselves. This ego tussle is more evident from the fact that Trinamool Congress (TMC) stepped out from supporting the joint opposition’s Vice President candidate Margaret Alva.

Also Read: Many Birds with just one stone- BJP picks Jagdeep Dhankar as its vice-president nominee

Change is the only constant. Politics in India has come a long way. From single-party majority governments to coalition governments to now a strong single party dominated alliance government. The opposition space has gone through the exact opposite cycle. Earlier there used to be a united single party-led opposition, to now when alliances are forged to put up a decent opposition. The opposition created a huge hue and cry and showed their show of strength after the Karnataka Congress-JDS government formation. 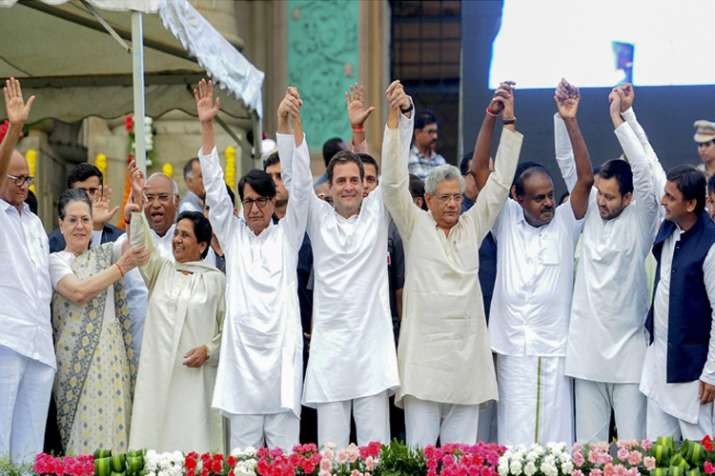 However, that get-together pose didn’t age well. The opposition unity is a myth which has been called out in this Presidential election. The rift will further widen after a probable loss in the Vice-President election. The signals of that are pretty evident even now. TMC and Congress are engaged in an ugly political fight and none of the parties is able to stop cross-voting or put-up decent issues to corner the incumbent Modi government. So, if things persist like this a third tenure for the Modi government is always on the cards. Only the victory margin will script new highs.

So, better for the opposition to learn some hard lessons from this defeat and take this as a battle of a much larger war that it has behind it in the form of the 2024 Lok Sabha general election. As a weak opposition is never in the interest of the nation. So, they better get their acts right otherwise they will have to evict the opposition space as well.

‘Show Documents or Vacate’: Manesar incident is a testimony of the sheer amount of Rohingyas in India