by Rahul Gupta
in Trending
0

Paris is considered to be the City of Love. Its vibrant culture and lively lifestyle make it a magnet for immigrants. The openness of the city and assimilating culture make it one of the top cities for immigrants and they form around 41% of the population. But geographically surrounded by the North Atlantic Ocean from the west and the east, the Mediterranean sea makes it prone to illegal migration. The conflict in Islamic countries in North Africa & West Asia made France, the capital of illegal Muslim migrants. Results of this overflowing immigrant population were seen in the exponential rise in crime & illegal activities in Paris. 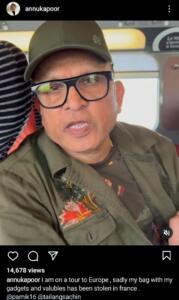 Watching the tragedy of Annu Kapoor, filmmaker Hansal Mehta also shared his horrific experience in France. He said, “Saw a video of Annu Kapoor sir who was looted in France of his valuables and belongings. Had a similar experience at the Louvre museum where my wallet was picked and I was stranded without cash, debit, or credit cards. More than anything else you feel terribly violated.”

“I had my little daughters with me and had to frantically call my wife to either fetch us as we had no means to pay for our trip back to our hotel. Rest of the trip, a family vacation was ruined because of the anxiety and inconvenience caused by this theft. The cards were blocked and totally worthless/useless to the thief. There was hardly any cash”, he further added.

“Moral of the story: When in France beware of being robbed like this. India is often unnecessarily maligned”, he added.

And totally worthless/useless to the thief. There was hardly any cash. Moral of the story : When in France beware of being robbed like this. India is often unnecessarily maligned.

Similarly, Kim Kardashian also faced gunpoint robbery in 2016 during her Paris visit. In his own luxurious apartment in Paris, at 2.30 night, a group of robbers dressed like police broke into her room. At gunpoint, they looted her 3.5 million euro worth of engagement ring along with other fancy apparel, and around USD 10 million were robbed from her. Yunice Abbas was later found to be the main culprit behind the heist.

According to a report, France receives around 80000 to 100000 illegal immigrants yearly. Illegal immigrants from conflicting countries like Syria, Iraq, Tunisia, and Libya have filled Europe. Increasing illegal migration in these countries supports the mushrooming of illegal activities in the region.

Paris, which has become the “theft capital” of the world, comprises 42% of the immigrants. The continued migration from north Africa & west Asia has changed the demography of the city. The mass migration and limited resources make the immigrants vulnerable to joining illegal criminal activities. Further, the nonavailability of food & shelter force people to earn through robbery, burglary, and theft.

Illegal immigration denies them stable legal jobs, so it becomes imperative to earn through any means. It is to note that the Arab Spring in Tunisia, the Islamist war in Syria, and the conflict in Libya, pushed a huge number of illegal migrants into Europe. In search of better opportunities and a peaceful life, they try to enter the country illegally.

In 28 countries of the European Union, about 25 million Muslims live. But the constant terrorist attacks, hatred, and religious Islamist extremism are now challenging the social fabric of the European society. Earlier, known for the development & beautiful climate, Europe has now become a breeding ground of Islamist radicalism, which has also engulfed Paris.