by Abhinav Singh
in Knowledge
0

Thursday was a monumental day in the field of astronomy. For the first time, astronomers through a collective global effort unveiled the first image of the supermassive black hole Sagittarius A* (pronounced “Sagittarius A-star”, and abbreviated as Sgr A*), situated at the heart of our own milky way galaxy – 27,000 light-years away. The image was produced by a global research team called the Event Horizon Telescope (EHT) Collaboration, using observations from a worldwide network of radio telescopes.

The EHT observed Sgr A* on multiple nights in 2017, collecting data for many hours in a row, similar to using a long exposure time on a camera. Each observatory recorded incoming light data using high-speed recorders developed at Haystack Observatory. These recorders were designed to process an enormous amount of data at rates of 4 gigabytes per second.

EHT Project Scientist Geoffrey Bower from the Institute of Astronomy and Astrophysics, Academia Sinica, Taipei was quoted as saying, “We were stunned by how well the size of the ring agreed with predictions from Einstein’s Theory of General Relativity. These unprecedented observations have greatly improved our understanding of what happens at the very centre of our galaxy, and offer new insights on how these giant black holes interact with their surroundings.”

Unlike other astronomical objects that are captured using sole telescopes, Event Horizon Telescope uses numerous synchronized radio telescopes situated across the earth, forming one giant telescope, roughly the size of the Earth. And those confused that we already had an image of a black hole should understand that the same EHT team in 2019 had captured the image of a black hole in the galaxy Messier 87, or M87 – more than 50 million light-years away from us.

Revealing that it was much more difficult to capture the photo of Sgr A* than M87, the scientists said, “The gas in the vicinity of the black holes moves at the same speed — nearly as fast as light — around both Sgr A* and M87*. But where gas takes days to weeks to orbit the larger M87*, in the much smaller Sgr A* it completes an orbit in mere minutes. This means the brightness and pattern of the gas around Sgr A* was changing rapidly as the EHT Collaboration was observing it — a bit like trying to take a clear picture of a puppy quickly chasing its tail.” 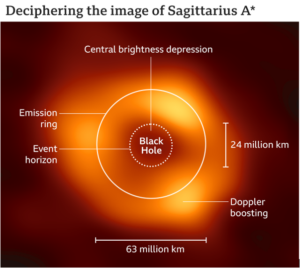 The similarities between the two different black holes

Moreover, the images captured are in line with the simulation shown in Oscar-winning movie ‘Interstellar’. While the Gargantuan (name of the black hole in the movie) was shown from the plane of the accretion disk, the black holes captured by the EHT are shown in an angular way, up from the poles.

How do black holes form and what lies ahead?

As stars reach the ends of their lives, most will inflate, lose mass, and then cool to form white dwarfs. But the largest of these fiery bodies, those at least 10 to 20 times as massive as our own sun, are destined to become either super-dense neutron stars or so-called stellar-mass black holes.

These trapdoors called black holes are fascinating celestial objects that have captured the imagination of scientists for decades. It’s impossible to capture a black hole as obviously it is pitch black as it suckles all the light.

However, it is possible to view a black hole through the swirling glowing gas around it forming a disk called an accretion disk. Light gets bent by the powerful gravity of the black hole, which is four million times more massive than our Sun and thus we can see the black hole in its full glory.

Black holes are incredibly dense objects around which the space and time continuum warps. It is said that if a human or any object was to venture too close to a black hole, one would get spaghettified. Such is the pull that huge celestial bodies like planets and moons cannot even escape the gravitational field of a black hole.

Astronomers said the new result would lead to a better understanding of gravity, galaxy evolution, and how even placid-seeming clouds of stars like our own majestic pinwheel of stars, the Milky Way, can generate quasars, enormous geysers of energy that can be seen across the universe.

Nobody knows what lies beyond a black hole. What happens at the center of a black hole called the ‘singularity’ has invited varied interpretations from scientists worldwide. There is a theory that if a black hole is able to suck things, there must be a white hole that spits them out — and the two are connected via an inter-dimensional tunnel, known as a wormhole.

Meanwhile, others believe that it leads to nothingness and that the laws of physics and quantum physics in a black hole are quite frankly beyond our comprehension.  Whatever the case may be, the images of black holes will help scientists dive deeper into the origins of our universe and perhaps understand the mysteries surrounding these fascinating bodies.