In the last few months, Indian exports have risen exponentially in almost every sector. The buoyant markets in the post-pandemic world and rising prices have taken the value of exports to new highs. Sectors like Agriculture, gems and jewellery are registering double-digit growth in exports. According to the Agricultural and Processed Food Products Export Development Authority (APEDA), farm exports have risen by 23% in the April to January period.

“Our thrust has been on promoting exports of Geographical Indication (GI)-tagged products and products sourced from hilly states, while we continue to scout for new markets for exports,” M Angamuthu, chairman, APEDA said.

The Modi government is all set to achieve the merchandise export target of 400 billion dollars in FY 22 under the leadership of the Minister of Commerce and Industry Piyush Goyal.

Agricultural commodities have huge demand in global markets as many major agricultural producers are either facing climatic problems or some geopolitical issue. Amid the ongoing disturbances, India has emerged as the trusted supplier of food to countries around the world. According to APEDA, Rice exports during the first 10 months of the current fiscal year rose 12% to $7696 million compared to the previous year. Rice contributes nearly 40% of India’s Agri-export basket.

In the last two years, India has witnessed a favourable monsoon and bumper jump in the production of agricultural commodities. The rising global prices and huge demand is ensuring that India breaks into among top suppliers of staples like wheat and rice. The value of the shipment of wheat, on the other hand, witnessed a surge of more than 387% to $1,742 million during the April-January 2021-22 period compared to the previous year. 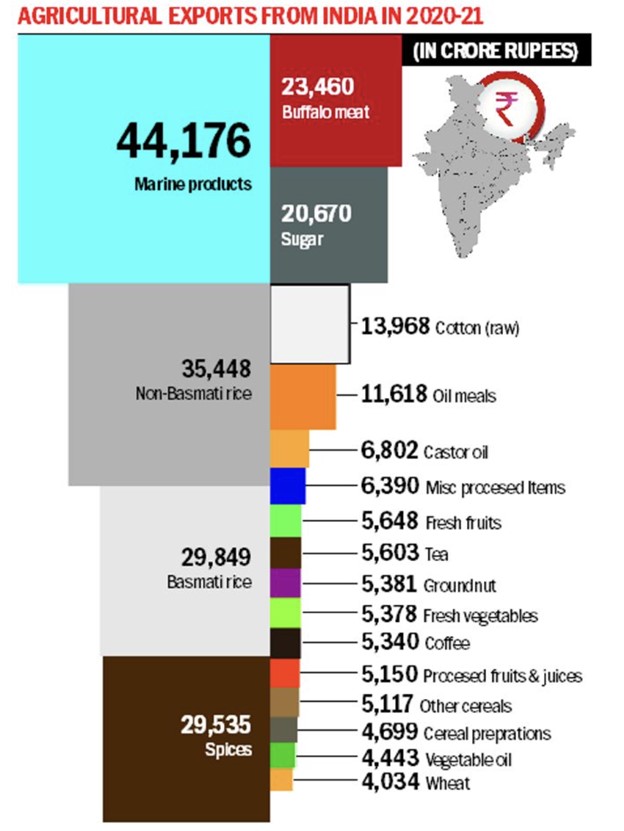 In FY 21, marine products, rice, buffalo meat, sugar and cotton were major Agri-exports. This year also the basket is expected to remain the same but the contribution of products like wheat and sugar will increase.

Also, amid the pandemic, the demand for unprocessed agricultural products grew in many countries and India was able to meet their demand through export.

India’s agriculture export has not grown much in the first five to six years of the Modi government but in the last two years, the growth has been in double digits.

Last year India broke into the top 10 agricultural exporters for the first time, replacing New Zealand. The other top Agri exporters are the European Union, the United States, China, Brazil, Russia, and Mexico. Another area where India is pushing hard for exports is textile. The textile export of the country has also remained stagnant for the last five to six years in the range of 30-35 billion dollars but this year, the government has set a target of 44 billion dollars.

By pushing for export in labour-intensive sectors like Agriculture and textiles, India can employ its large population and grow its economy at double-digit. The Economic Survey in the last three years has made it very clear that the government aims investment-driven and export-led growth, and sectors like agriculture and textile would be crucial in achieving the same.

With back-to-back abstaining at the UN, India has sent a very strong message to the world

NATO and UN – The good for nothing organisations