‘You made us bankrupt,’ Sri Lanka sends a warning to Xi Jinping as India bags a massive deal

by Abhinav Singh
in Trending
2

Amid the worsening economic situation of Sri Lanka, the political class of the country and its leaders are openly targeting Chinese President Xi Jinping. Accusing Jinping of damage to the Sri Lankan economy due to his devious debt trap diplomacy tactics, Sri Lankan lawyer and Member of Parliament Wijeyadasa Rajapakshe has written a scathing 45-points, 6-page letter to the CCP leader.

In the 45-point letter, Rajapakshe did not hold back and called out China’s One Belt-One Road initiative. He remarked in the letter, “The longstanding relations of ours has turned into a different course since your country launched the “One Belt-One Road” policy on the pretext of strengthening the foreign policy and economic strategy of China.” 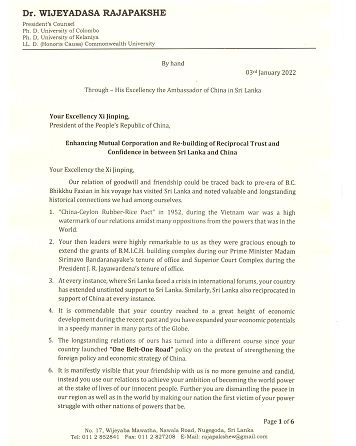 Stating that China only used the island nation, Rajapakshe slammed Jinping by stating, “It is manifestly visible that your friendship with us is no more genuine and candid, instead you use our relations to achieve your ambition of becoming the world power at the stake of lives of our innocent people. Further you are dismantling the peace in our region as well as in the world by making our nation the first victim of your power struggle with other nations of powers that be.”

We will not pay back the loans: Rajapakshe

Having already gifted the strategically important Hambantota Port to the Chinese, courtesy of the heavily inflated loans, Sri Lanka and Rajapakshe are not willing to walk down the same road.

Stating that Sri Lanka will scrutinize all the deals of the last 15 years, the parliamentarian said, “Transactions you have secured through corruption will be cancelled and we hold no liability to pay back any loans obtained for such contracts. In the event of any restructuring, under no circumstances the period of any agreement will be permitted to exceed a period of 15 years from the date of the inception of such contracts,”

While the voices of dissent are starting to enlighten the Sri Lankan populace, India is quietly going about its business. As reported by TFI, giving major heartburn to China, New Delhi and Colombo on Wednesday (January 5) announced their decision to jointly develop an oil tank farm in the island’s north-eastern Trincomalee province.

According to the agreement reached, the Indian Oil Subsidiary, Lanka IOC (LIOC) would be given a 49% stake in the joint development of the Trincomalee Oil Tank farm, with Ceylon Petroleum Corporation keeping 51%.

Located in China Bay, the tank was built during the Second World War by the British to serve as a refuelling station. The Oil farm has 99 storage tanks with a capacity of 12,000 kilolitres. Currently, LIOC runs 15 tanks but the deal will see 61 tanks being jointly developed.

Stuck since 1987, the deal completed only after PM Modi’s intervention

In 1987, India and Sri Lanka agreed to jointly restore and operate the Trincomalee oil tank farm through an exchange of letters annexed with the India-Sri Lanka agreement signed between the two countries. However, owing to the civil war and several other bottlenecks, the deal could never reach its fruition.

After PM Modi visited Sri Lanka in 2015, the two sides agreed to set up a petroleum hub in Trincomalee, for which a “joint task force” would draw up plans. However, with China lovers sitting in the Sri Lankan cabinet, the deal went into a lull once again.

But with Sri Lanka spiralling into an economic crisis, India managed to find a way in. Reportedly, Foreign Secretary Harsh Vardhan Shringla in October, during his visit to the island nation made it a point to tour the tank farms, foreshadowing the just-concluded deal.

The economic crisis has deepened in Sri Lanka of late. The country owes more than $6 billion to China and is expecting India to lend it a helping hand. While the chatter from New Delhi has been low, some news reports suggest that the Modi government is mulling a couple of way-outs for the island nation.

Reportedly, New Delhi is looking to provide two credit lines to Sri Lanka – one of $1 billion to help the island nation import food, medicine and other essential items and another of $500 million for the import of petroleum products from India.

Being the net security provider in the Indian Ocean region, India has always provided steadfast economic and military support to Ceylon. India has, so far, provided Sri Lanka with 12.64 million Covid vaccines, making India a front-runner in staving off Sri Lanka’s health crisis.

Winds of change blowing in Ceylon?

New Delhi is also facilitating Indian investments in different sectors in Sri Lanka to contribute to the growth and expand employment. Although, thanks to India’s aggressive diplomacy, Sri Lanka has tried to address Indian concerns over the past few months.

The fact that Sri Lankan lawmakers are openly criticizing the Chinese government and welcoming India’s investment in the region suggest that winds of change have started to blow.