by TFIPOST News Desk
in Opinions
1

If there is one problem in the story of Indian agriculture that needs to tackle, it is Minimum Support Price (MSP). For many produce like wheat, rice, sugarcane, the Minimum Support Price has become the Maximum Selling Price, because the quantity of the product increases every year while the demand remains more or less the same, and in some cases like wheat, it is decreasing.

MSP is responsible for many problems in the country including malnutrition. The research data suggests that children in many well-to-do families are malnourished – not because they do not have enough food on the plate but because they are consuming items like wheat and rice which do not provide sufficient nutrition.

So, India’s hunger index rankings, which intellectual yet idiots of the country describe as lack of sufficient food on the table, is an MSP problem (which they support). 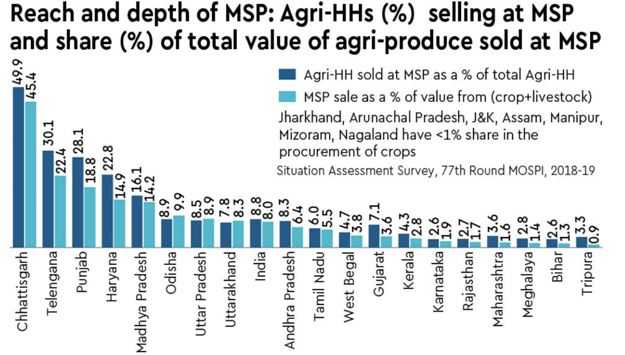 However, nutrition is not the only problem due to MSP. It has many more issues associated with it including class problems and environmental problems.

The purchase of MSP is concentrated in a few states like Punjab, Haryana, Western Uttar Pradesh, and to some extent Madhya Pradesh. So, the rich farmers in these states have industrialised and mechanised the process [subsidised input (seeds), subsidised/free power for irrigation, subsidised fertilizers, subsidised and guaranteed purchase on MSP, and use of migrant labour] and enjoy leisure life banking on state subsidies, the taxpayer pays for their extravagant lifestyle.

Most of the farmers in these states hardly visit their fields as the whole crop lifecycle is managed by migrant labourers, and they just need to be present at important processes like seeding, irrigation, and harvesting. So, for a work of fewer than two months in a year, they earn hefty money and then hold the government to ransom for months, as seen in Delhi-NCR borders.

The government started the PM-KISAN scheme to ensure that small and marginal farmers, who constitute around 80 per cent of the farming-dependent population, get 6,000 rupees per year. The amount being given to small and marginal farmers needs to be increased, but that is possible only if the government saves money on the billions of dollars being paid to subsidise the rich farmers.

MSP is keeping the rice farmers rich and poor ones poor! Unless this disastrous problem is solved, Indian agriculture and farmers cannot move forward on the economic ladder.

Apart from the nutrition and class divide, the third problem where MSP has a big role to play is falling water levels and degradation of soil quality. In Punjab, Haryana, and Western Uttar Pradesh, the water level is falling at an exponential pace. The quality of drinking water is being destroyed due to excessive use of groundwater for crops like paddy, which are not suited to the region.

Paddy and sugarcane need a lot more water than wheat, thus more suited to the eastern part of the country, but because buying of the crop is guaranteed, the farmers from Punjab, Haryana, and Western Uttar Pradesh are producing crops like paddy and sugarcane.

The quality of the soil is being destroyed due to excessive use of fertilizers and according to various estimates, the fields of Punjab will become barren land in the next two decades.

If the government does away with MSP, a natural crop cycle driven by market needs and geographical suitability will take place. In other parts of the country, especially in Southern Indian states, a perfectly healthy natural crop cycle is taking place. With the rising demand for horticulture produces, farmers in central and southern India are focusing on these crops and earning a better income.

But the farmers from Punjab, Haryana, and Western UP are caught in the vicious cycle because a few rice landlord farmers are holding the rest of the population to ransom.

Tamil Nadu man’s children converted to Christianity. So he gave his house worth Rs 2 crores to a temple