The Philippines: A land of Shiva, Ganesha and Sanskrit, lost to Spanish and American conquests

You know things have changed when a country cannot identify its original name. The Philippines got its name in 1544, after a Spanish explorer, Ruy López de Villalobos, named the archipelago after the prince of Spain, Philip II. This is a relatively very new name for a country believed to be around 709,000 years old.

There are 7,000 islands in the Philippines. No one knows what they were called before the Spanish invasion, as the colonial powers dismissed the people of the islands as primitive and uncivilised. This is what colonialism did. Not only did the colonialists loot the wealth of the native people, but also destroyed their culture. However, there are remains of the ancient language, culture and religion in the Philippines and they point out that Hinduism had a lot of influence in the pre-colonial Philippines.

This was quite natural, for the Spanish had a reputation of destroying local culture, looting their wealth and massacring local people. Those who converted to the religion of the invading Spaniards, that is, Christianity were spared. And Spanish rule continued for over 300 years in the Philippines, so you can imagine how the Filipino people didn’t have any choice.

The Spaniards went a step further and tried to delete all archaeological evidence of Filipino history. Hundreds of idols were destroyed across the Philippines while converting the native people to Christianity. And even after decades of fully converting the archipelago, Spanish priests kept discovering idols hidden by secret practitioners.

Even till 1773, Spaniards were considering means of stopping the secret practice of the old religion in the Philippines. Most of the idols representing the old Filipino culture have, thus, got destroyed.

Indian culture in the pre-colonial Philippines

Hundreds of years of colonial rule may have obscured the old culture of the Philippines, but India had an ancient connection with the archipelago from around the 1st century to the 14th century.

So, ancient polities in the Philippines were heavily influenced by the Hindu-Buddhist religion and culture. The strong trade links between India and the Philippines was definitely an influence on the archipelago.

And the Southeast military campaign of Rajendra Chola further encouraged Indian influence in the Southeast Asian country. Some Indian rulers like Samudra Gupta had a well-defined navy that extended their reach and influence over the various islands in South and Southeast Asia.

Evidence of Indian culture in the ancient Philippines

No matter how hard the invading colonial powers tried, they couldn’t get rid of the fables, stories, some artefacts, linguistic semblances and folklore in the local Filipino culture.

The influence of Sanskrit in local Filipino languages like Tagalog, Kapampangan and Cebuano is easily visible. Conscience is called Budhi in Tagalog and seems to have its roots in the Sanskrit word “Bodhi”. Similarly, Guro in Tagalog seems to have been derived from Guru in Sanskrit.

In fact, the influence of the Sanskrit language in the Philippines is such that sitting Filipino President Rodrigo Duterte even proposed renaming the country as the “Republic of Maharlika”. The word “Maharlika” has its roots in the Sanskrit word “maharddhika”, which means a “man of wealth, knowledge, or ability”. And is believed to refer to the warrior class of the Tagalog people, much like Kshatriyas in Hinduism.

And then several artefacts are found in the Philippines, which have their roots in Hinduism. The most popular amongst them is the 13th century— 21-karat Golden Tara. It is an image of a Hindu goddess and serves as a proof that Hinduism was existent in the pre-colonial Philippines. 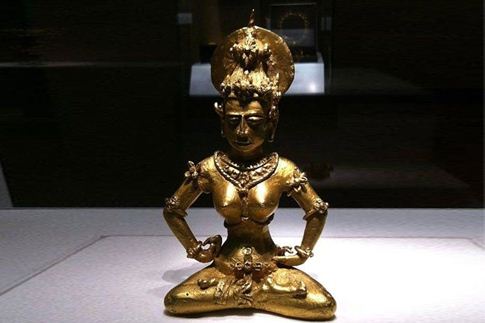 Other artefacts include a bronze statue, identified as the Buddhist version of Lord Shiva, a copper statue of Bhagwan Ganesh and a golden Garuda pendant.

Surprised, right? Well, the Philippines still has an affinity for the Hindu epic Ramayana. During the 2017 ASEAN summit in Manila, Rama Hari, a ballet company presented a musical version of the Ramayana, which reasserts the Hindu roots of the Philippines. The old Filipino culture has been obscured by centuries of colonialization but the strong influence of Hinduism is still visible in the Philippines.