by Abhinav Singh
in Trending
3

After the fake news of Loni, Ghaziabad incident went viral on Twitter and the social media giant failed to curb it, unlike dubbing Sambit Patra’s toolkit tweet as ‘manipulated media’ — an FIR was consequently lodged by the UP Police against Twitter Inc, its India unit and seven others in connection. Meanwhile, Twitter India managing director Manish Maheshwari had been summoned for questioning within seven days. Fearing for his arrest as Twitter left him to fend for himself, Maheshwari changed his bio from ‘MD at Twitter’ to ‘Trying to run business @TwitterIndia”. 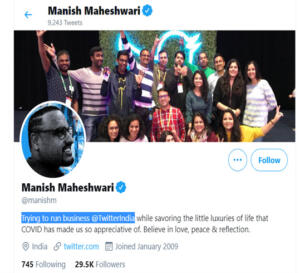 The notice sent to Maheshwari by Ghaziabad police read: “Some people used their Twitter handles as a tool to spread animosity and hatred in the society. Twitter did not take any cognisance of such messages and let the anti-social messages go viral. The case is being investigated and your participation is mandatory. Report to the Loni border police within seven days after receiving this letter to register your response.”

Maheshwari trying to distance himself away from Twitter’s top executive post gives more fuel to the controversy regarding the ambiguous hierarchy setup of the California headquartered company. Reported by TFI, when Delhi Police arrived at Maheshwari’s Bengaluru residence for questioning, he told the Police that in Twitter India’s hierarchy, MD is merely a sales executive.

Read More: Twitter India has a complicated hierarchy where MDs are sales executives, and no one knows about their team members

“Manipulation starts at the doorstep of Twitter itself. Twitter should start fact-checking its own employees. The senior-most employee of Twitter India has misrepresented people at large by announcing Maheshwari as Managing Director when he claims to be mere sales head when asked to take responsibility,” said a senior source in the government familiar with the facts of the case, as per a report by India Today.

Reported by TFI, Twitter last Tuesday lost its ‘intermediary’ status after failing to comply with the new IT rules. The US-based company refused to employ a statutory officer in time, despite being granted repeated extensions. This meant that the company and its top executives including Maheshwari were now open to legal action against them under the penal code of the country for any ‘unlawful’ and ‘inflammatory’ content posted on the platform by any user.

Read More: Twitter loses the intermediary status in India. It will now face criminal liability for unlawful content posted on the platform

Ravi Shankar Prasad, the Minister for Electronics and Information Technology shared the news that Twitter lost its ‘immunity’ granted under Section 79 of the IT Act of the country.

“Twitter was given multiple opportunities to comply with the same, however, it has deliberately chosen the path of non-compliance,” he said whilst adding, “If any foreign entity believes that they can portray itself as the flag bearer of free speech in India to excuse itself from complying with the law of the land, such attempts are misplaced.”

There are numerous queries arising as to whether Twitter is entitled to safe harbour provision. However, the simple fact of the matter is that Twitter has failed to comply with the Intermediary Guidelines that came into effect from the 26th of May.

Twitter’s hierarchy is not well defined, it formed an Internal Complaints Committee (ICC) as required under the Sexual Harassment of Women at Workplace (Prevention, Prohibition and Redressal) Act, 2013, six years after its inception in the country and it does not want to report child sexual abuse material to Police, as mandated under the POSCO Act. With such sketchy behaviour, it is indeed a miracle that the company has managed to run for so long unrestrained in the country.

Dr Altamas Hussain was arrested in April for Remdisivir black marketing. Now he is arrested for fake black fungus injections