The urban leftists are an interesting bunch, to be honest. For them, the views of someone as ridiculous as Tej Pratap Yadav are serious. Likewise, for them, the issue of love jihad is a mere figment of imagination, but the reverse of the same is nothing less than a danger for the entire team.

Well, we are seriously not making this up, you can understand our views by the following pictures – 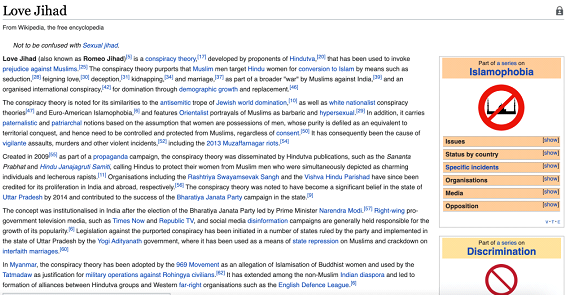 To quote the excerpt from above, “Love Jihad [also known as Romeo Jihad] is a conspiracy theory, developed by proponents of Hindutva, that has been used to invoke prejudice against Muslims.” Not only that, it is also included under the series of ‘Discrimination’ and ‘Islamophobia’.

However, the story does not end just here. Wikipedia also labels Love Jihad as a campaign ‘orchestrated at the orders of Bhartiya Janata Party, into which Rashtriya Swayamsevak Sangh and Vishwa Hindu Parishad’ is also involved. However, matters came to head when the following screenshot came to notice –

Read More: Love Jihad cases are on a rise in Muslim-dominated Eastern Bihar

That’s interesting. It’s like the pot calling the kettle black. When the issue of conversion is a mere figment of imagination for Wikipedia, how can they be worried about reverse Love Jihad? That’s like Major Sameer giving a lesson or two in ethics to Srikant Tiwari. For more information, log into ‘The Family Man’ on Amazon Prime.
To be honest, with their current dispensation on Love Jihad, Wikipedia has openly proved their bias towards their ideology. The way they have mocked the sufferings of the Hindu girls while showing fake concern for reverse Love Jihad shows their orientation and it wouldn’t be wrong to say that Wikipedia is well on its way to doom.

‘I wondered why he always avoided me, now it’s clear,’ Tathagata Roy exposes the damage done by Mukul Roy from within the BJP

China was about to conduct large scale hacking of India’s financial structure, Indian authorities averted it