India’s Covid numbers are high, but nothing compared to many other countries

I have lost two close family members to Covid19, both my parents were hospitalized for over a week in April 2021, my son had Covid19 in October 2020, and more than 65 others in my family and close
friends have had it at some time or the other, so I too am affected by this once-in-a-century pandemic.

But I am a realistic person who studies facts and data before reaching conclusions.

Ever since 6 April 2021, when India’s Covid19 cases crossed one lakh (100,000) for the first time since the pandemic started in India in 2020, people started blaming Prime Minister Modi for India’s
‘second wave’. When the daily case count crossed 1.5 lakh cases just four days later, the voices became a little louder. These were not just voices on TV screens, but also posts on social media (especially Twitter), and articles in Indian and foreign newspapers and news websites.

Fast forward to just five days later and the anti-Modi voices gained additional momentum, as India crossed the unfortunate milestone of two lakh daily cases. The daily case count had peaked at 97,859 during the ‘first wave’, on 16 September 2020.

India crossed three lakh cases on 21st April or 2.74 times the cases of just 15 days earlier. By that time, India already had severe shortages of hospital beds, oxygen, and Remdesivir. The anti-Modi brigade got a huge supply of additional arsenal to aim at India’s PM. The same PM who had been credited across the world just a year earlier for handling the pandemic very well, and who had been applauded just a couple of months earlier by more than 50 world leaders for helping them combat the disease in their countries, as India had exported (or even donated) vaccines to more than 90 countries.

The attack did not come from China or Pakistan. It came from within—from political opponents of
Modi and the BJP and their voters, from journalists and media houses that have always been against
Modi/BJP/RSS, from hundreds of armchair ‘experts’ who took on Modi and the BJP/RSS on TV
debates and thousands more through social media, especially Twitter.

Yes, India reported 414,182 cases on 6th May, and crossed four lakh cases on three out of seven days during the week. But how do India’s Covid19 cases compare with other relatively large countries which have reported a very high number of cases in any given week?

The comparison has to be in number of cases per million (one million = 10 lakhs) people, as there is no other way to compare data, since you can’t expect cases in a huge country like India to be the same as Italy with 4.34% of India’s population, Brazil with 15.37%, or even the USA with 23.9%.

The daily circulation of The Times of India is more than double of the UK’s Metro and almost 1.78
times higher than USA Today not because more Indians read English newspapers, but because India has so many more people. Indian Railways has 10.1 times more passenger-kilometres of traffic than
Russian Railways as India’s population is 9.53 times higher than Russia’s. Therefore, it is but natural that India will see many more people get sick from a pandemic than much smaller countries.

If China disclosed data honestly, we would have ‘real’ comparisons, but China hasn’t done so—not
that anyone with an average IQ expects them to.

Despite India reporting more than 2.73 million (27.3 lakh) cases from 30 April to 6 May (including
both days), we were much lower than seven of 15 other countries with minimum population of 40
million (four crores) and comfortably lower than three others. The average for the 15 countries excluding India is 491 compared to India’s 280.3. 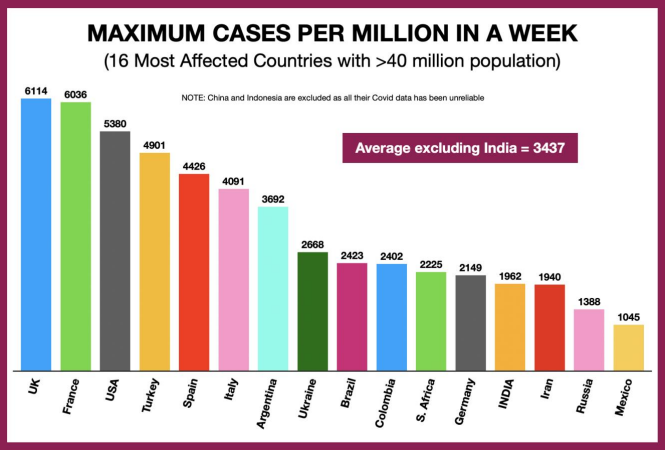 Even if India’s actual case (and death) count is larger than ‘official’ figures, how do we know the same is not the case with other countries? Going by the nature of governments in Turkey, Ukraine,
Colombia, Iran, and Russia, it is very likely they have fudged data. 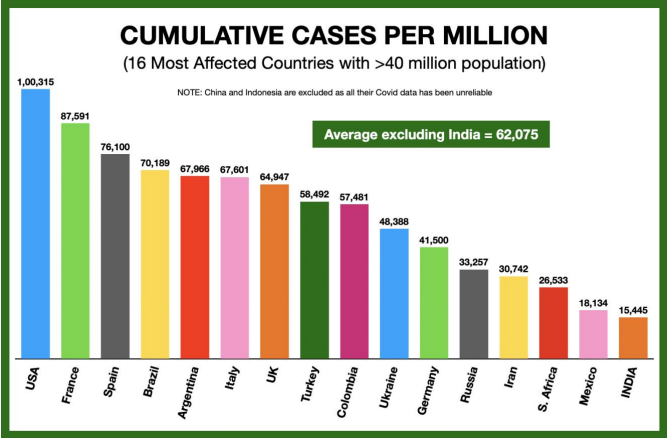 The population of 48 European countries (including Russia), the USA, Brazil, and Mexico, is roughly equal to 1.024 times India’s population, and they have 2.39 times India’s cases.

It is important to look at the case count in the context of tests done. The fewer the tests, the fewer
will be the cases (for any disease), and vice-versa.

The numbers (as on 4 May) for total tests per 100 million in 20 large countries with a minimum population of 50 million (five crore) are given in the next chart. If you multiply by 100, you get the number of tests per million people.

While India has fared much better in its testing numbers than far richer countries such as Japan,
South Korea, Iran, Mexico, Thailand, South Africa, and Indonesia, we could have still done better, as I
said in over 230 blog posts on Covid19 between March and November 2020, which you can find at
www.bagariaamit.com. 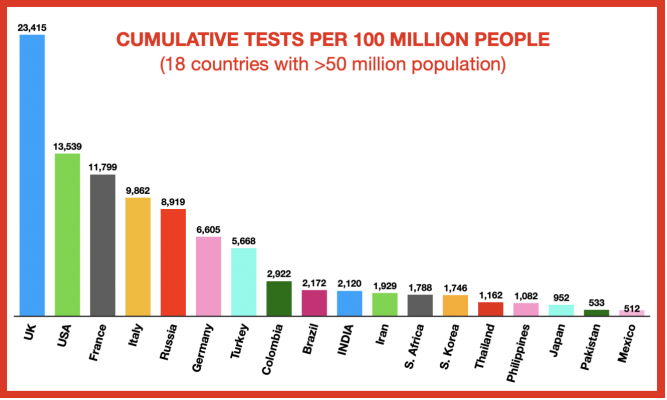 Anyways, 2120 is not bad, considering that India’s Per Capita GDP (PCGDP) of $2191 is much
lower than the nine other countries that have done more testing per million (Source: IMF’s April 2021 World Economic Outlook Database). 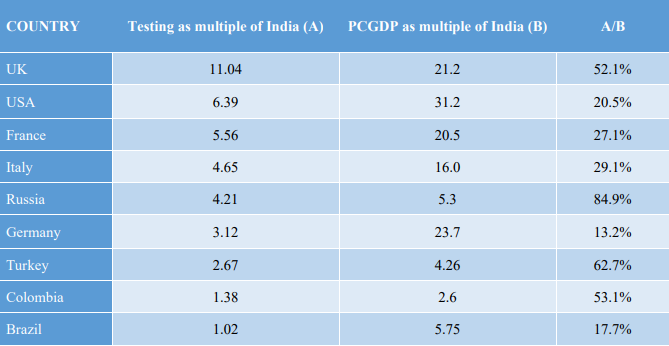 Except Russia, and to a smaller degree Turkey and the UK, all the other countries have done far lesser testing than India, when we compare their economies. 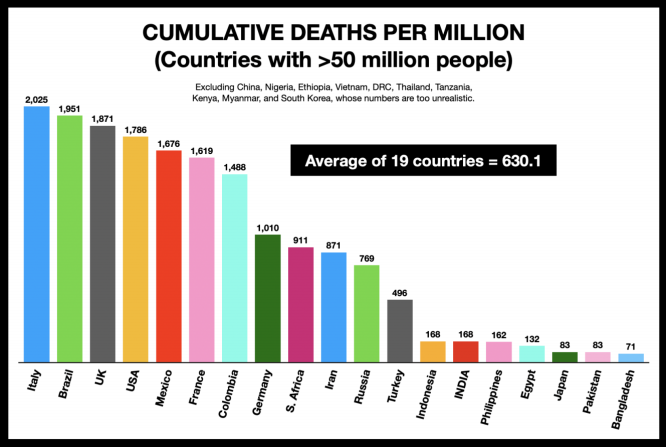 Yes, Covid-related deaths in India is low, at only 26.66% of the average of these 19 countries.
There could be two explanations.

I am surprised that Japan (median age 48.6) has such low death numbers despite high urbanization and population density. But a large percentage of their population wears face masks even in normal course, and professionals such as taxi drivers, bus drivers, porters, etc. also wear gloves. The less said the better about Pakistan and Bangladesh.

The second reason could be that deaths have been underreported across India, and if this is the case, it could be either because the governments (Central and states) want to suppress numbers, or sheer mismanagement. Even if actual deaths are 3x the ‘official’ figures, we would be at 80% of the world average. That is without factoring the very real possibility that deaths have been quite possibly underreported by Iran, Turkey, Indonesia, Philippines, Egypt, Pakistan, and Bangladesh, and quite possibly by Japan also.

And I may just be right. As per a new analysis published by the Institute of Health Metrics and
Evaluation (IHME) at the University of Washington on 6th May, Covid19 has caused ~6.9 million deaths, more than double what official numbers show. IHME found that Covid deaths are significantly underreported in almost every country, including the USA. Latin America, Central Europe, Eastern Europe, and Central Asia were the hardest hit. This figure only includes deaths caused directly by the ‘Coronavirus’, not deaths caused by disruption to health care systems and communities. 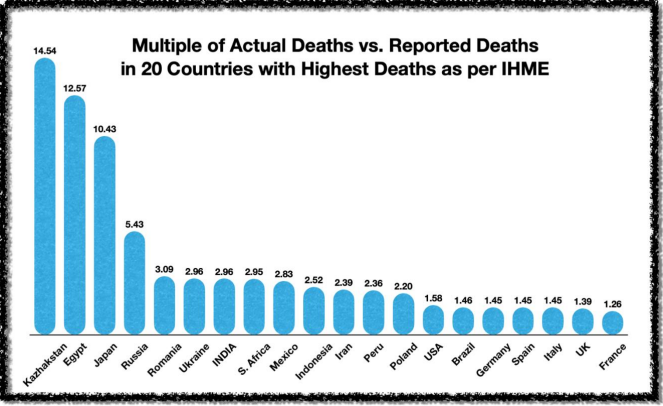 Yes, apart from the USA, other developed countries such as Japan, Russia, Germany, Spain, Italy,
the UK, and France have all underreported deaths.
Interestingly, the IHME report does not feature the origin of the Covid19 pandemic—China. That’s
because there is no report anywhere on the actual deaths in China, which officially claims only 4,636
deaths, or only 3.22 per million, compared to the 416.8, global average, which goes up to ~917 as per the IHME study. China’s ‘official’ deaths are just 0.77% of the world’s official death figures.

Let’s also look at the Case Fatality Rate (CFR), or the percentage of positive cases which resulted in deaths. This is perhaps more important, as the death rate by itself (without factoring total cases)
means very little. 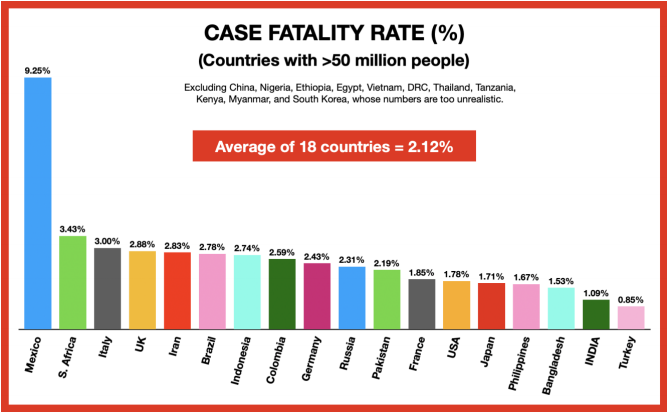 If we exclude Mexico (which is a very odd outlier), the average of 17 countries falls to 1.96%. Even then, India’s 1.09% seems to be very low, despite the fact that we have a lower median age. Therefore, it can be safely concluded that death rates in India are being underreported.

If we estimate that the actual deaths in India are 2.96x the official figures, our CFR goes up to
3.23%, which is believable, considering that India’s health infrastructure is not as good as most other
countries in the above chart, and that the IHME report says almost all countries have underreported
deaths.

Given below is what the CFR chart looks like after factoring in IHME’s study. It has only 13
countries as the IHME report does not cover Colombia, Pakistan, Philippines, Bangladesh, and Turkey, whose underreporting must be even beyond IHME’s imagination. India has done very well. 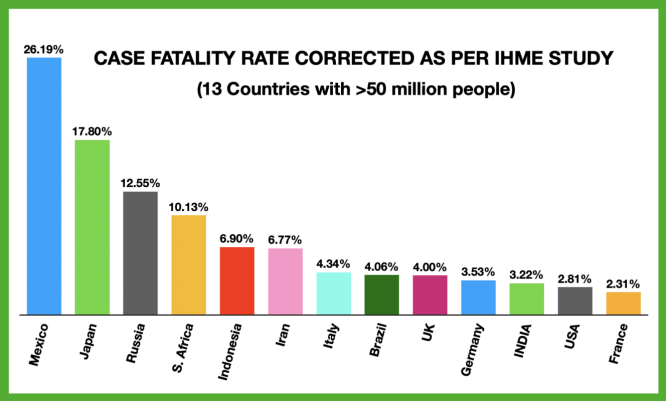 I don’t believe even for a second that more than one in four Covid-positive cases are dying in
Mexico, or more than one in six in Japan. Therefore, if deaths have been underreported by almost
all countries, so have the number of cases.

But propaganda articles (especially in foreign media) and tweets have suggested India’s death tolls at 5x and even 10x the official figures. Are people suggesting India has lost 2.341 million (23.41 lakh)
lives to Covid19?

As per official figures, 59,736 people died due to Covid from 15 April to 6 May 2021. Are these morons trying to say that 537,624 bodies were secretly cremated or buried? Over five lakh bodies?? An NRI doctor evn put it at 100x. C’mon, be realistic!!! Criticize the government for all its mistakes, but STOP playing games with death, as what goes around, comes around. It’s called KARMA

(The above article has been authored by Amit Bagaria. Bagaria is a former serial entrepreneur who became an author in mid-2018. He has authored 12 books, out of which six were bestsellers. He is currently working on a book about the ongoing Covid-19 crisis in India.)

AltNews came up with a laughable ‘fact-check’ on Congress toolkit. It got exposed brutally