In the pre-internet, media, and social media world, when the investors used to pump in a business only when its balance sheet looked strong and products were being used/accepted/admired by a large number of people but in the modern start-up driven culture, some investors fall for ideas that would definitely not get converted into product and the person who claims to be investors would burn the investor’s money for advertising of the company and publicity for himself/herself.

A very similar story is happening between Zerodha and Cred. Zerodha, a discount stockbroking company whose product (an app named Kite which helps the investors – especially retail – to invest in the stock market) is being used by more than crore people for daily trading has passed a resolution that promoters can get a salary up to ₹ 100 crore rupees.

This did not go well with Kunal Shah, founder of Cred, a fintech company that makes great advertisements, but its product is not even used by a lakh people on a daily basis. Shah took a potshot at Nithin Kamath, the founder of Zerodha, and tweeted, “My salary is ₹3L/annum. I should have started a discount stockbroking company to add more zeros to my salary,” and tagged Kamath’s handle.

I should have started a discount stock broking company to add more zeros to my salary.

Kamath, who is very active on Twitter, took his handle to demolish the stupidity of Shah and tweeted a 7 tweets thread. “I’m surprised by the unwanted noise around this whole salary news of @nikhilkamathcio, Seema (my wife), & me. The headlines are misleading. We are a private company & no obligations to clarify, but we thought maybe we should, as there are folks who are misinterpreting this,” he tweeted.

I’m surprised by the unwanted noise around this whole salary news of @nikhilkamathcio, Seema (my wife), & me. The headlines are misleading. We are a private company & no obligations to clarify, but we thought maybe we should, as there are folks who are misinterpreting this. 1/7

In the last tweet, Nithin also explained why the promoters do not take huge salaries because more than 50 per cent of it goes to the government in form of taxes. “Promoters don’t take out profits through salaries as it is tax-inefficient, you end up almost paying 50 per cent in taxes. We believe that building sustainable businesses and paying taxes is a great step in contributing to society and the nation,” he tweeted.

Although, the tweet by Nithin was not even needed because many users have already started throwing the numbers of Zerodha and Cred at Shah’s face and trolled him endlessly for his stupidity. 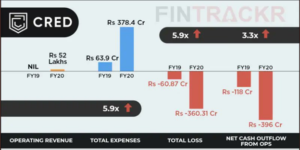 A user named Niveda tweeted the number of both companies and said, “You know @kunalb11 there’s a huge difference between Cred and Zerodha. Let’s look at numbers now shall we? It’s kind of obvious why you earn ₹3lpa plus 204583883772 cred coins as your bonus. Numbers speak volumes.”

You know @kunalb11 there's a huge difference between Cred and Zerodha.
Let's look at numbers now shall we?

In an old-world operating model, Shah would have been stripped of his job while Kamath would have been awarded an even higher salary. But in a venture capital-driven start-up environment, Shah can brag that he is taking only ₹3 lakh rupees per annum. Given his inefficiency, he would probably not even be hired as a manager in any company.

Many other users also trolled Kunal Shah using his prior tweets. We must recognize that for the businesses to stay afloat the promoters need to do hedging and Kamath is doing the same. Moreover, if he is taking a ₹100 crore salary, around ₹50 crore goes to the government as tax which will be later used for welfare while with a ₹3 lakh per annum salary, Shah is not even a taxpaying citizen of this country.