Last week, West Bengal’s BJP supporters and workers allegedly suffered under murderous assaults by the state goons. Even members of the Left were targeted by the ruling party’s hoodlums in the state. However, the assault on democracy in West Bengal has not stopped opposition parties from across the country to cheer for Mamata Banerjee. Shiv Sena – which found its secular character in 2019, has now had its chief spokesperson Sanjay Raut compare Mamata Banerjee to Punyashlok Ahilyabai Holkar. This travesty of comparison was made by Raut in no less than the Shiv Sena’s mouthpiece publication – Saamana.

Sanjay Raut has earlier compared Mamata Banerjee with the Queen of Jhansi – Rani Lakshmibai. Now, for the man to go on comparing Punyashlok Ahilyabai Holkar is an insult to Devi Ahilyabai, the Holkar family and all Marathas at large. Raut was taking jibes at the Congress party when he decided to conveniently compare Mamata to Punyashlok Ahilyabai. In his enthusiasm, Raut also subtly projected Banerjee as the one who could take the lead to challenge the BJP and Prime Minister Narendra Modi in the 2024 Lok Sabha polls.

“If the Congress is here today, where will the Congress be in the 2024 electoral scenario? Will there be any new direction in the 2024 Lok Sabha elections after Mamata Banerjee’s victory? If the Opposition tries to form an alliance together, who will represent it? It should be unanimously decided and the Congress should also agree to it,” Raut wrote in Saamana.

Registering their strong opposition against the outrageous comparison drawn by Sanjay Raut between Punyashlok Ahilyabai Holkar and Mamata Banerjee, the influential Holkar family has written a strong-worded letter to Maharashtra Chief Minister Uddhav Thackeray, in which they have strongly made known their disgust between Ahilyabai Holkar and a “ruler who commits atrocities on her own residents.” In the letter, Bhushan Singh Raje Holkar has called the preposterous comparison ‘unacceptable’. 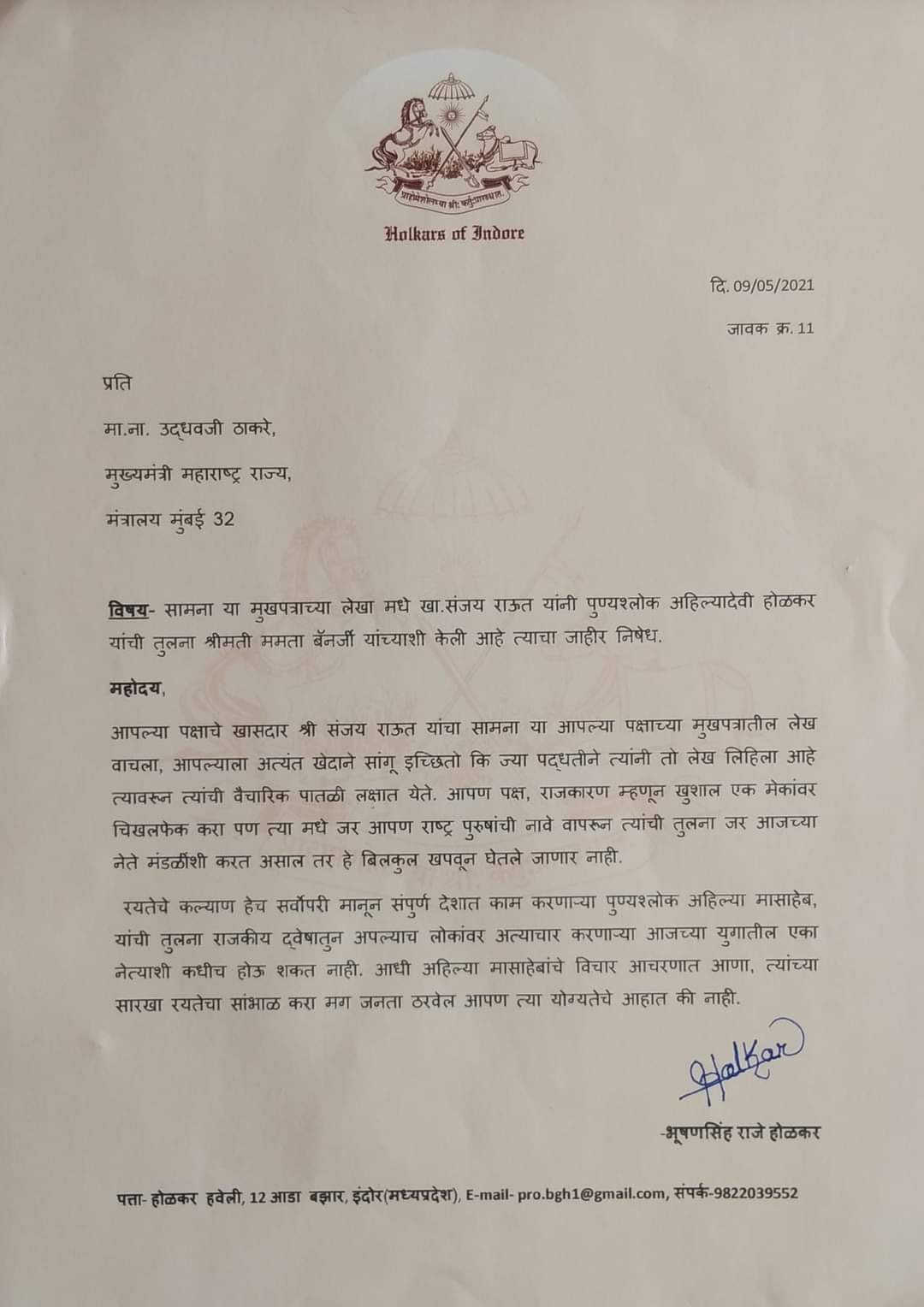 The Holkar family has every right to be outraged at Sanjay Raut’s mindless comparison between a ruler who was venerated by her people as a ‘Devi’, to a woman who allegedly has a history of giving effect to anti-Hindu shenanigans and cancelling Ma Durga idol immersions only because the day happens to coincide with the Muslim commemoration of mourning – Muharram.

Punyashlok Ahilyabai Holkar was the hereditary noble sardar of the Maratha Empire. Ahilyabai was a great pioneer and builder of Hindu temples. She built hundreds of temples and dharmashalas throughout India. Her greatest achievement was to rebuild the Kashi Vishwanath Temple in 1780 – after it was looted, desecrated and run over by tyrant Aurungzeb’s marauding forces. Holkar reconstructed and restored the glory of hundreds of Hindu temples, dharmashalas and institutions.

Throughout her life, Punyashlok Ahilyabai Holkar stood up for Dharma and restored Sanatan heritage across the country. Interestingly, the Holkar family was known for not using public funds to meet their personal and family expenses. Ahilyabai inherited personal funds which at that time was estimated to be to the tune of sixteen crore rupees. Ahilyabai used the personal funds in the restoration of Hindu temples and furtherance of Sanatan Dharma.

Cut to Mamata Banerjee, who Sanjay Raut has compared to Punyashlok Ahilyabai Holkar

Mamata’s politics survive on the oxygen of minority appeasement. As mentioned earlier, she runs a government in West Bengal, which bans Durga visarjan so that Hindus do not come in the way of those observing Muharram on the streets. Mamata Banerjee also harbours a rather explicit disgust for the chant ‘Jai Shree Ram’ and has not shied away from targeting ordinary citizens publicly for merely chanting the three words.

Mamata Banerjee had even gone to the extent of appointing her close aide Firhad Hakim as the chairman of the Tarakeshwar Development Board – a body which looks after the Tarakeshwar temple. After much controversy, she was forced to replace Hakim. During the anti-CAA agitation, Islamists ran a free riot in West Bengal without any fear of the law. That in itself is quite telling of how they enjoy umbrella immunity under the present regime in the state. And all this is not even a fraction of how anti-Hindu the TMC is.

Sanjay Raut has therefore insulted each and every Marathi Manus. He has also denigrated the legacy of Ahilyabai Holkar by comparing her to Mamata Banerjee. If the Shiv Sena does not take action against him for such a travesty – we would all know that the party claiming to stand for Maratha pride is, in fact, a mere stooge to its newly made political partners.

Barelvis and Khadims clash: “Maulvi sponsored radicalization is a termite to Islam

UNSC Row: Time for China to choose between Competition and Cooperation with India