by TFIPOST News Desk
in Economy1
2

Amid the coronavirus pandemic, the role of computers and the internet has become even more crucial for consumers as well as companies. Given the rising use of Information Technology, the Indian IT companies made big gains in the year which has been not so good for companies in many sectors.

Moreover, the net income of the company grew by 21 per cent in the last quarter and 20 per cent for the whole year. Most of the IT companies in the country posted a double-digit net income growth in the last fiscal year, thanks to billions of dollars of operating cost saved due to work from home. 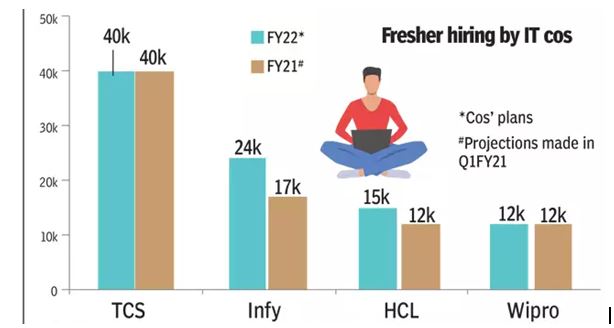 The revenue and the profits of the IT sector are expected to grow further in the coming years as they have bagged multi-million dollar deals in the last few months. With the growing use of Information Technology and the increasing acceptance of Indian IT companies in Europe, the Indian IT sector is all set for exponential growth and the people with coding skills will earn like never before.

The Indian IT companies adopted a very aggressive approach (contrary to their nature) the last year and acquired a large number of companies in Europe, Australia, and the United States.

The European companies, which have traditionally been reluctant to outsource the IT operations like American firms, were forced to do so to cut the losses during the pandemic and this was a big win for the Indian IT sector.

Almost two decades ago, the Indian IT sector rose to the occasion to solve what was known as the Year 2000 problem or Y2K problem and now post-COVID-19, the Indian IT companies are becoming saviour for the European and American companies in the digital age through sophisticated digital technologies.

With an annual output of more than 200 billion dollars, the Indian IT sector proves to be the backbone of the Indian economy and the primary source of foreign currency. It contributes around 7-8 per cent to India’s GDP and employs lakhs of people in the highly skilled services sector. In the coming years, the sector is set to grow exponentially given the rising expenditure on Information and Communication Technology (ICT) services by the companies as well as individuals and will play an important role in making India an economic powerhouse.

Is Nitish fudging data to present a rosy picture of COVID control in Bihar?