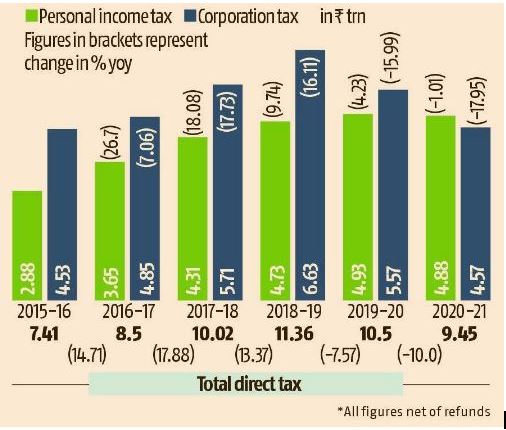 “The net direct tax collections for the FY 2020-21 have shown an upswing, despite the inherent challenges brought on by the COVID-19 pandemic on the economy,” the Finance Ministry revealed in its statement.

Moreover, the job creation in sectors like Information Technology (largest formal sector employer in the country), pharmaceutical, and media that employ a chunk of India’s formal workforce and pay a good salary also contributed to this rise in the income tax collection.

Since the phased lifting of lockdown started, the formal job creation has been higher compared to last year, every month. Therefore, it might sound counterintuitive, but India actually created a larger number of formal jobs, and the income of the people employed in the formal sector also witnessed an increase amid the coronavirus pandemic.

A large number of employees and millennials, especially those employed in the informal sector, lost their jobs and went back to their villages from cities like Delhi, Mumbai, and Bengaluru. This led to a sharp contraction in the economy, which was expected to post a negative expansion of around 7 per cent in FY 21.

However, the economic recovery has been unprecedented and the higher GST collection in successive months evidently proves the same. If the government can handle the second wave of the coronavirus well, the country is all set for a long-term expansion of the economy and witness a huge boost in job creation in the sectors that employ the formal workforce.

A Lutyen’s office, Subsidized food and liquor and sham elections – The Truth of the elitist Press Club of India

Uddhav govt has once again triggered a Migrant crisis. One that could be bigger than the last one