It seems that Trump wants to completely ostracize China by the time his first term in the White House ends. As per the latest NBC News report, the US President has told his aides that he would like to hold an in-person meet with the Russian President Vladimir Putin before the US Presidential polls in November.

And Trump is going to discuss nukes with Putin. He wants to update the New START- a nuclear arms reduction treaty between Russia and the US. But, expectedly, when Trump and Putin meet, they will likely discuss the steep rise in Chinese nuclear weapons over the recent past. The Nuclear arms race has changed with China’s lofty nuclear proliferation ambitions and it is no longer just about Russia and the US.

Traditionally, the US and Russia have been the biggest Nuclear powers in the world. Throughout the Cold War between the US and the erstwhile Soviet Union, both the sides proliferated nuclear arsenal at a breakneck speed. By 1990, the arms race had led to both the sides acquiring 10,000 Nuclear warheads, each capable of destroying the planet several times.

In the post-Cold War years, disarmament efforts from both Washington and Moscow have therefore focused upon reducing each other’s nuclear warheads. Several treaties were signed including the Strategic Arms Reduction Treaty (START I) between then US President George H.W. Bush and the past President of the erstwhile Soviet Union Mikhail Gorbachev. START I limited the US and Russia to 6,000 operational Nuclear warheads.

The New START treaty that came into force in 2011 further limited the nuclear stockpile of Russia and the US to 1,550 operational warheads each.

But while Russia and the US have been progressively reducing their nuclear stockpile, China has been proliferating it at a rapid pace. According to the Nuclear Threat Initiative (NTI), a US-based nonpartisan and nonprofit organisation, “China closely guards information about its nuclear arsenal, making estimation unusually difficult. However, China has approximately 290 nuclear warheads.”

But China’s present Nuclear firepower is not the only issue, rather it is China’s plans which could concern both the US and Russia. The editor of the Chinese Communist Party mouthpiece Global Times, Hu Xijin wrote a story on May 8 titled, “China needs to increase its nuclear warheads to 1,000.” 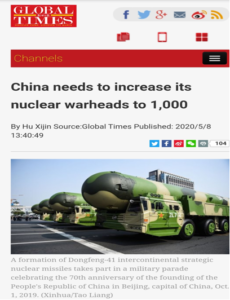 Xijin added, “China needs to expand the number of its nuclear warheads to 1,000 in a relatively short time. It needs to have at least 100 Dongfeng-41 strategic missiles. We are a peace-loving nation and have committed to never being the first to use nuclear weapons, but we need a larger nuclear arsenal to curb US strategic ambitions and impulses toward China.”

The ‘peaceful’ Dongfeng-41, a Chinese road-mobile Intercontinental Ballistic Missile (ICBM), is estimated to have a range of 12,000-15,000 kilometres with strike capacity extending up to the Continental United States.

The US is, of course, perturbed by Chinese Nuclear ambitions. Donald Trump has been frequently asking China to join the Nuclear disarmament efforts with the US and Russia and set a limit to its growing nuclear arsenal.

Russia, on the other hand, is equally worried about China’s nuclear proliferation. Putin claims to share a strategic “axis of convenience” with Beijing, only because the US and the Western world have recklessly sanctioned Moscow. Deep within, Russia has many insecurities about China, including the growing Chinese influence in the Arctic, Russian Far East and even Central Asia. There is no reason why Putin would remain indifferent to China’s nuclear warheads.

Also, Russia itself wouldn’t want two adversaries in the form of the US and China with tremendous Nuclear firepower. Therefore, there is a high chance that Trump and Putin find common ground in reducing China’s nuclear warheads when they meet in the near future.

Putin only wants to rescue the Russian economy and therefore if the US offers a better deal, Moscow will have no qualms in throwing Beijing under the bus. Hence, the moment the US promises to ease out sanctions on Russia, Washington and Moscow could reach a temporary agreement to fight China together instead of fighting each other.

Putin will have a lot to gain by finding common ground on China. He will be able to rescue the Russian economy by getting Moscow mainstreamed all over again. As for Trump, he will be able to get Russia to join his axis against China.

IPL says no to TATA, Unacademy and approves Tencent funded Dream11 as the official sponsor for IPL 2020