Shinzo Abe – A man of honour, courage and humility

The world was in for a shock on Friday, as the Japanese Prime Minister Shinzo Abe announced his resignation citing bad health, after eight years in office. He described the decision to leave midway with many unfinished goals as “gut-wrenching”. Indeed, there are many big plans left unfinished including postponed Tokyo Olympics, revisiting Japan’s pacifist Constitution, decoupling from China and also revitalising Japan’s timid economic growth rate.

Abe’s resignation is a shock for Japan and all of Japan’s friends including India, the US and Australia. But what has also struck everyone’s imagination is the sheer sagacity in Abe’s bid to resign when he knew he was not in the perfect health condition to continue in office. While no one was going to question him, Abe took the courageous move of hanging his boots in the better interest of his nation, despite several unfulfilled goals. This is at odds with the kind of megalomania that usually gets attached to tall political leaders with no real challengers.

At a certain level, the decision to resign was more of a reality check imposed upon himself by Shinzo Abe. He has been suffering ulcerative colitis since he was a teenager, but now his condition has seemingly aggravated. Japan today stands at a critical juncture as the arch-nemesis of China and therefore Abe must have felt that the leader of China’s direct challenger cannot afford to be in a medical situation.

Shinzo Abe is the one who had lent political stability to Japan and instilled a strong nationalist sentiment within Japan. And this wasn’t easy. Abe faced steep challenges including a devastating earthquake, a brutal Tsunami and a nuclear disaster soon after taking office. But Abe steered Japan out of all its internal crises.

The Japanese Prime Minister wanted to make his country a global power all over again. He addressed Japan’s old age issue and promised to relax Tokyo’s strict immigrant policy to create a workforce capable of fuelling Japan’s economic growth. ‘Abenomics’ as his economic policy was called was supposed to take Japan out of the Lost Decades.

And then what made Shinzo Abe a true world leader was his intent to take the China Challenge head-on. He led the physical process of decoupling from China by pulling 87 Japanese companies out of China.

With Abe, Japan is no longer an idle observer. He has been constantly pushing Tokyo towards giving up Pacifism and forging defence relations with strategic allies like India and Australia, apart from the traditional relations with the US. The aim is, of course, the ambition to keep China in check.

Abe tried to make Japan the centre of world affairs once again, both in terms of economic growth and soft power. Therefore, Abe had also brought the Olympics to Tokyo with much fanfare. Tokyo was supposed to host the Olympics this year, but presently it stands postponed to 2021 and now it is clear that Abe won’t be able to oversee the organisation even if the leading multi-sports event is held next year. Tokyo organisers have reportedly spent 12.6 US billion dollars on the event. 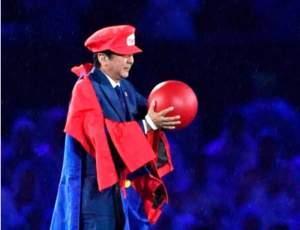 But a lot still remains to be done. As the Japanese Prime Minister himself said, “It is gut-wrenching to have to leave my job before accomplishing my goals.” Abe himself mentioned three unfulfilled goals- resolving the issue of Japanese abducted by North Korea several years ago, Japan’s territorial disputes with Russia and amendment in his country’s Pacifist Constitution.

As described by many, Abe is a nationalist political leader. It must have been natural for him to see his country through and “accomplish” his goals before demitting office. In fact, in tall political leaders around the world, there has always been a tendency to achieve all their goals, even if they are medically unfit to continue in office and their presence comes at the cost of national interest. Ultimately, such leaders become burdens upon their countries and political parties, and it becomes quite a task to disgrace them out of power.

The tallest of political leaders in world history, including the wartime US President Franklin D. Roosevelt and his British contemporary, Prime Minister Winston Churchill, have been known to continue in office or even hide their medical conditions while leading their countries. And in this sense, Abe’s resignation becomes a landmark moment in world politics. He has shown unparalleled ability to get over megalomania for Japan’s betterment.

And it is also not as if Abe didn’t have an option. He held a press briefing and himself announced his resignation. Had he wanted, Abe could have hidden his health issues too and fulfil all his goals including overseeing the Olympics that could be held next year. But he had the honour, humility and courage to take a backseat when needed.

Abe’s resignation was no ordinary moment and world leaders like India’s Prime Minister Modi and US President Donald Trump also came to show their anguish and pain over Abe’s bad health and inability to continue in office.

Pained to hear about your ill health, my dear friend @AbeShinzo. In recent years, with your wise leadership and personal commitment, the India-Japan partnership has become deeper and stronger than ever before. I wish and pray for your speedy recovery. pic.twitter.com/JjziLay2gD

The fact remains that Abe was no ordinary political leader. He has set high benchmarks both in terms of his active political career and also in his resignation. He will go down in history as the Japanese Prime Minister who revitalised Tokyo’s political stability, economic growth and military firepower and also decided to call it quits when it became necessary.

As other state CMs cry foul over JEE/NEET exams, Odisha CM does what he does best. He solves the problem

Most people watched ‘Birdman’ but very few understood it

Second Crusade: The Crusade which changed the course of Christianity