by Mahima Kalra
in Opinions, Trending
0

A few years ago, we were living in a high oil price world, where the demand was so high that buyers used to compete and bid higher prices for limited production. The per barrel oil prices remained above 100 dollars per barrel for many years even after the financial crisis of 2008-09. However, in the second half of the 2010, the market dynamics changed completely and we are now living in an oil surplus world where the producers are offering heavy discounts to countries like India, the third-largest consumer in the world.

The change in market dynamics has also changed the strategic equations between India and the Arab world. Previously, the Arab world countries most of which are Muslim majority used to outspokenly support Pakistan against India on Kashmir and various other issues. But, now the Arab world knows that India would stop importing oil from these countries if they say a word against India, therefore, they have kept silent on Kashmir issue and are even cornering Pakistan in Organization of Oil Exporting Countries (OIC). 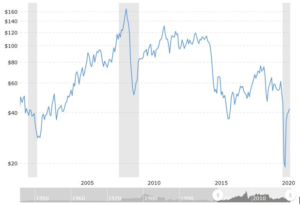 The oil prices started moderating in June 2014, a few weeks after the Modi government came to power for the first time. There were various reasons behind price moderation- some short run and some long run. The long-run factors like- exponential growth of shale oil industry in the United States; shifting of clean and renewable energy in Europe; focus towards harnessing wind and solar energy in China and India– the largest and third-largest importer of oil– have led to permanent softening of oil prices. In the last five years, the oil price never crossed the benchmark of 100 dollars per barrel.

The outbreak of Coronavirus has only worsened the situation for oil-exporting countries as demand has collapsed due to curtailing of economic activities by the government. Today, we are living in a world where the oil-exporting countries are begging the importers to purchase more oil, and offering various discounts. Saudi offered huge discounts to India to control a larger share of the Indian market and replace Iraq as the top supplier. 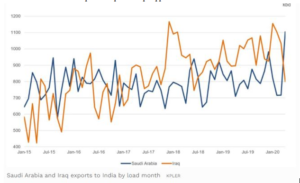 The Arab world countries like Saudi Arabia, Iraq, and UAE are competing with the United States, Venezuela, and African countries to sell more oil to India. In an oil surplus world, India has plenty of options to go for oil purchase but Arab countries could not choose to irk the third-largest importer of oil.

Therefore, the positions on the negotiating table have changed 180 degrees with India having an upper hand. And this is the reason that OIC invited the then Indian foreign minister Sushma Swaraj as ‘guest of honour’ in 2019.

In an oil surplus world where the prices are benign, India has started to diversify its supply chain and now imports more oil with Nigeria, Venezuela and the United States, which are now fourth, fifth, and sixth largest suppliers respectively. However, Arab world countries- Saudi Arabia, Iraq, and UAE remain the top three suppliers respectively but the fact is that India now has many more options.

Moreover, there’s also the Iran factor. The Arabs know that currently, India is not buying oil from Iran. Iran used to supply 10 percent of India’s oil needs, however, India stopped buying from Iran after the US put sanctions on the Islamic country. So, India started purchasing more oil from Saudi Arabia and the UAE. So the amount of oil India was buying from Iran, it started buying from Saudi Arabia and the UAE. The Arab world knows that Trump’s Iran policy is somewhat unpredictable and since the Arabs don’t know when the US would lift sanctions on Iran, it is pertinent for them to keep India in their good books. They also feel that if the US sanctions on Iran are lifted in the near future, the India-Arab ties should be so strong that New Delhi does not snub Riyadh to buy oil from Iran. since the Arab world knows that India has strong ties with Iran.

With the change in equations in the oil market, India is among the markets which have the capacity for an increase in oil demand. Therefore, India is going to be a large source of revenue for crumbling oil-dependent Arab economies and irking India is the last thing they can afford to do.

Therefore, in the last few years, the Arab countries have awarded Indian Prime Minister with highest state honours and have also not uttered a word against abrogation of Article 370 in Kashmir. Saudi Arabia, the de facto leader of the Arab world, humiliated Pakistan a few weeks ago by not allowing its Army chief to meet the respected dignitaries. Pakistan has sought refuge in Turkey and China amid the jolt from the Arab world. The benign oil prices proved boon for India economically as well as strategically.

Pakistan is no more a legitimate stakeholder in Afghanistan. It has lost both Taliban and Afghan Govt