HOME » Geopolitics » Europe » Greece finally finds its spine, joins hands with Egypt and Italy to go all out against Turkey

Turkey has stepped up aggression in the Eastern Mediterranean and Greece has become the biggest victim of Turkish President Recep Tayyip Erdoğan’s belligerence. Ankara has been issuing warnings and violating Greek waters, with the aim of carrying out research, exploration and drilling activities in Greece’s Continental Shelf.

Till now, Greece seemed subdued in its attempts to counter Turkish attempts to encircle the entire Aegean Sea. But to be fair, Athens felt compelled not to confront the Turks in a brash manner, because it believes that the European Union will not back it in a direct, physical manner. So, in a masterstroke against Turkey, Greece is now confronting Turkey through alliances and maritime deals with Italy and Egypt.

Greece is an influential naval power in the region with an expansive Continental Shelf extending out of its various islands. Geography plays to its advantage creating a long and wide Exclusive Economic Zone, an area whose resources only Greece can control as per international law. On the other hand, Turkey is not a signatory to the UN Convention on the Law of the Sea and has its own interpretation of the international maritime law.

Ankara and the Libyan Muslim Brotherhood government simply claim that islands do not have Continental Shelves or Exclusive Economic Zones. Turkey backs Libya’s ‘interpretation’ of the International Maritime Law. A deal signed between Turkey and the Libyan Muslim Brotherhood leader, Fayez al-Sarraj in November last year aimed to steal the Greek maritime space by robbing its islands of its EEZs.

Libya is going through a regime change war where Turkey has been strongly backing the UN-backed GNA in Tripoli, while other countries like Italy, France and Egypt have put their weight behind the Haftar-led forces. Turkey has been expanding influence in the African nation of Libya in order to dominate the Eastern Mediterranean.

The Greek position that their islands have EEZs is however supported by international law and therefore, Athens is basing its international transactions in the Eastern Mediterranean on the recognised maritime law. This is a plan to surround Turkey from all sides. In June, Italy and Greece signed a deal dividing the Exclusive Economic Zones of the two countries in the Ionian Sea.

For Athens, the maritime deal with Italy hinders the Turkish President’s ambitions to dominate the Eastern Mediterranean. It directly impinges upon Turkey’s ambitions to carry out research activities in Greece’s waters. Therefore, Turkey’s State-run media also suffered a massive meltdown after the Italy-Greece EEZ deal.

In fact, adding to the meltdown, Greece and Egypt have also used the UNCLOS to counter Turkey’s maritime expansionism. Greece and Egypt have decided to delimit their own Exclusive Economic Zones. Amid heightened Turkish aggression, the Greek Foreign Minister, Nikos Dendias, hurried to Cairo to meet his Egyptian counterpart, Sameh Shoukry.

The Egyptian Foreign Minister said, “Part of the signing ceremony of an agreement for the establishment of an exclusive economic zone between the Arab Republic of Egypt and the Republic of Greece.” The agreement is fully in line with the Median line principle when the Exclusive Economic Zone of two countries extending upto 200 nautical miles from the baseline overlaps with each other.

The Egyptian Foreign Minister said, “Part of the signing ceremony of an agreement for the establishment of an exclusive economic zone between the Arab Republic of Egypt and the Republic of Greece.” The agreement is fully in line with the Median line principle when the Exclusive Economic Zone of two countries extending upto 200 nautical miles from the baseline overlaps with each other. 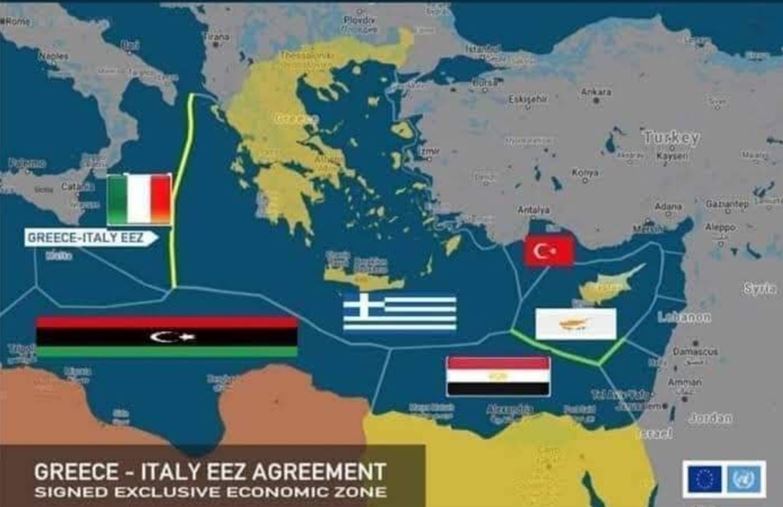 The EEZ deal with Egypt, who is also at loggerheads with Turkey, will help Greece in cornering Libya in its South. Greece strongly believes that the latest deals will help it in securing its maritime interests in the resource rich region, according to the diplomatic sources quoted by Hellas Journal, Dendias has directly targeted the Turkey-Libyan Muslim Brotherhood deal with the latest move in Egypt. He said, “the agreement between Turkey and al-Sarraj is now in the trash bin.”

Greece has cornered Turkey from all sides. Even the island of Cyprus is closely aligned with Athens, because of its acrimonious past with Ankara and the present-day maritime conflicts. Within the Eastern Mediterranean, Turkey is the only country that has conflicts with all its maritime neighbours, whereas Israel, Greece, Cyprus and Egypt have created strong multilateral ties only in order to contain Turkish influence.

Relations between Turkey and Greece have worsened. Turkey has been pumping illegal immigrants into Greece, and also converted Hagia Sophia, an important building for Greek Christians into a mosque. Now, Turkey is claiming sovereignty over Greek waters to steal its resources, but Greece has managed to completely surround Turkey.