The years of relentless struggle to reconstruct Shri Ram Janmbhoomi complex at Ayodhya has finally brought fruits as the reconstruction officially commenced with the Bhoomi Poojan ceremony having taken place today, in the presence of Prime Minister Narendra Modi, UP Chief Minister Shri Yogi Adityanath and other important dignitaries. The temple complex, which was demolished to make way for the controversial Babri Masjid, will now be restored in a matter of some years.

While there is no doubt about the fact that most of the citizens of Bharat are overjoyed with this decision and wish for the temple to be reconstructed at the earliest, there are some VVIPs as well who are yet to come to terms with the fact that Shri Ram Janmbhoomi complex will now be officially reconstructed without any delay. As such, it comes as no surprise when one finds some of them venting out their ire on social media. Some of them are even going on to the extent of making threats against the community that fought for centuries to get the abode of the beloved deity reconstructed.

All India Muslim Personal Law Board gave open threats, referring to the recent reconversion of Hagia Sophia Complex into a mosque by Turkish dictator Erdogan. To quote their Tweet, “#BabriMasjid was and will always be a Masjid. #HagiaSophia is a great example for us. Usurpation of the land by an unjust, oppressive, shameful and majority appeasing judgment can’t change its status. No need to be heartbroken. Situations don’t last forever. #ItsPolitics” 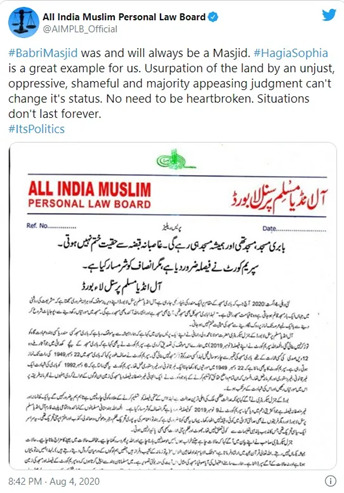 By the ‘majority appeasing judgment,’ AIMPLB is also advocating for a mosque to be constructed in Ayodhya, as per the demands of the Muslim community. To be honest, the tweet by AIMPLB is less of a tweet and is more of the reflection of the ego hurt by the victory of the perseverance of the oppressed majority over the bullying minority of overrated intellectuals and a vicious clergy.

However, this was just the beginning, as a plethora of self-proclaimed liberals and intellectuals cried hoarse about the reconstruction, labelling 5th August as a ‘Black Day in the history of Indian democracy’. Echoing the sentiments of AIMPLB, chief of AIMIM and MP Asaduddin Owaisi proclaimed, “Babri Masjid was, is and will forever be a mosque Inshallah. #BabriZinda Hai” 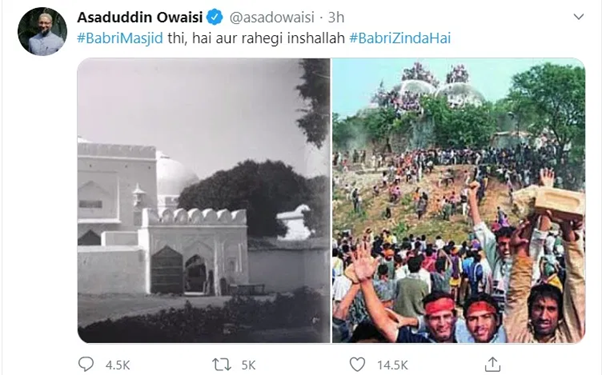 Yes, you read that right. The coterie of left-liberal intellectuals and crypto Islamists began trending #BabriZindaHai, only to become a laughing stock. If this was the trend, how could the poster girls of yellow journalism stay behind? Journalists Rana Ayyub and Aarfa Khanum Sherwani wailed their hearts out on Twitter, saying that the India they knew is dead. While Rana tweeted, “Not the India I Know #5th August”, Aarfa also could not stay behind and tweeted, “Is this the country my ancestors fought for? I just can’t recognize my country anymore”. Poor souls, it seems the burns of Jammu & Kashmir being liberated from the hegemony of Article 370 on the same day haven’t subsided yet.

Even that’s not all. Audrey Truschke, another pseudo custodian of Indian history, lamented on Twitter, “Today, 5th August, the physical cornerstone of the Ayodhya Ram Mandir will be laid. It is a monument to hate, bigotry, and extrajudicial violence, truly a fitting foundation for the Hindu Rashtra” 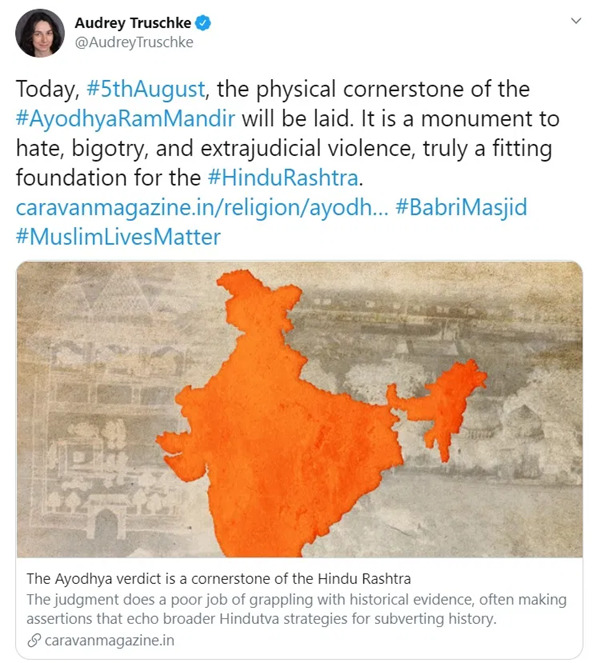 When such luminaries enlightened the masses with their school of thought, how could our ‘Walking CNN’ Rajdeep Sardesai not chip in? The chap punched back to back tweets, indirectly proclaiming his immense ‘love’ for the decision to reconstruct the Ram Mandir. While in one tweet, he shared the view of Pratap Bhanu Mehta, whose article in Indian Express was titled “The reconstruction of Ram Mandir is the victory of Hindu colonialism”, in another tweet, the chap wailed, “My take on the Ram Mandir nirmaan: this is a time for introspection, not celebration.. Interfaith harmony must begin by prosecuting those responsible for the demolition.. build a Mandir but who will build a better, more harmonious India..”

‘The Ram temple is the first real colonisation of Hinduism by political power..’ powerful, evocative piece by @pbmehta .. https://t.co/RadKvwMmxq

My take on the Ram Mandir nirmaan: this is a time for introspection, not celebration.. inter faith harmony must begin by prosecuting those responsible for the demolition.. build a Mandir but who will build a better, more harmonious India.. https://t.co/vz3VBOYidd @IndiaToday

To be fair, it is not completely right to castigate such people, for they are only mourning their loss, as despite leaving no stone unturned, they failed to prevent the reconstruction of the Shri Ram Janmbhoomi Complex. However, this can never give room to deny those people a right to celebrate the return of their beloved deity to Ayodhya, for whom millions of Indians did not even hesitate to give up their lives.

‘I’ll come back to Ayodhya the day Ram Mandir construction starts,’ PM Modi fulfills a promise he made 29 years ago

‘We won’t disengage,’ China makes last effort to save its face after being humiliated by India at all fronts