Trump will lose the Presidential election in 2020, just like he lost in 2016

Liberals are out with their verdict

by Akshay Narang
in Americas
0

The United States will go to polls in a little less than four months, but an entire galaxy of American journalists, specific media outlets and pollsters is already out with election results. ‘Trump will lose’, they say. At a certain level, this is reminiscent of the manner in which the same ecosystem had predicted Trump’s defeat in 2016.

In 2016, liberal pollsters and media were delusional to the extent that they kept predicting a landslide victory for Hillary Clinton till the final moment. And this time they are betting heavily on Joe Biden.

Nate Silver, editor-in-chief of opinion poll analysis website FiveThirtyEight, had predicted an 80.3% chance of Clinton winning the polls. And around the same time, four years later, Silver is predicting a massive lead for Joe Biden. 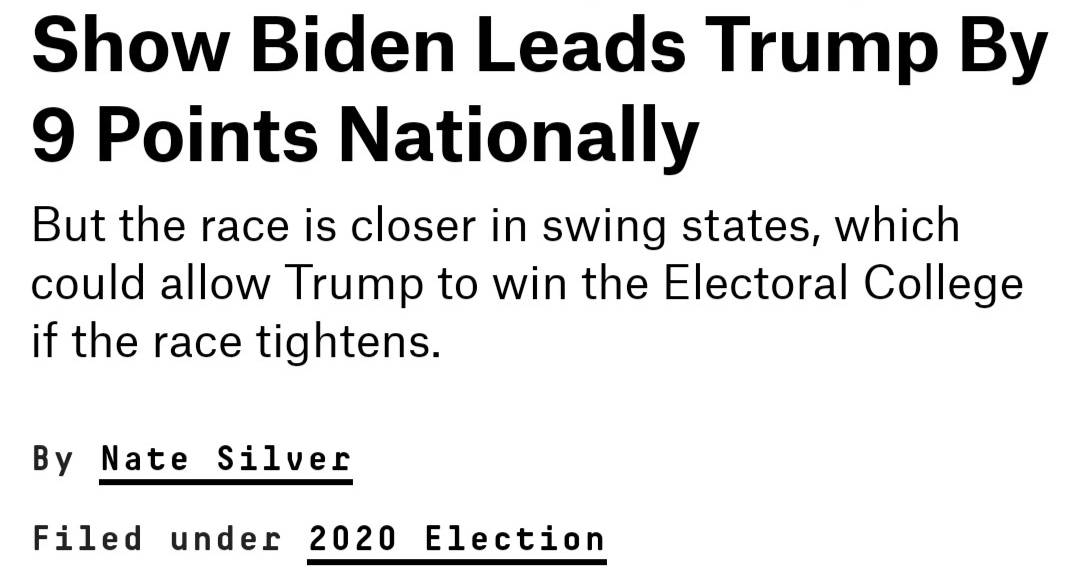 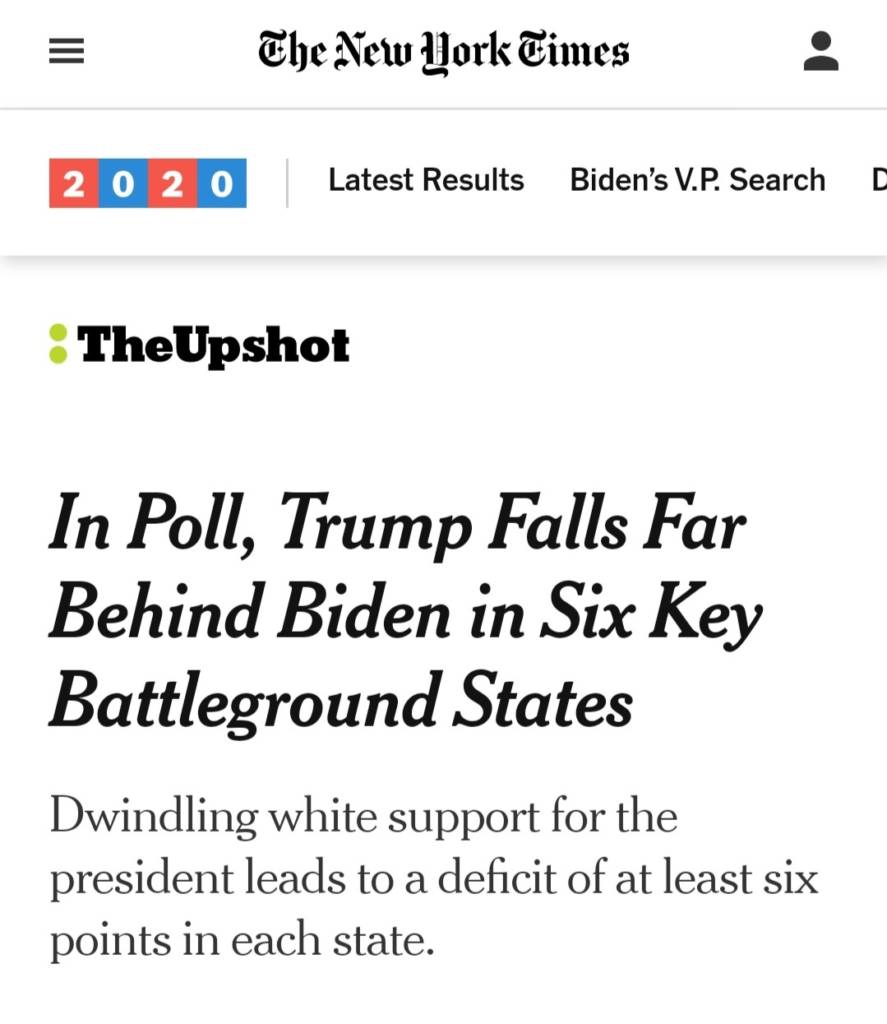 Not surprisingly, the same platform had also predicted an 85 per cent chance of Hillary Clinton winning the 2016 Presidential polls. This is illustrative of how delusional the left-liberal ecosystem can get in the United States. 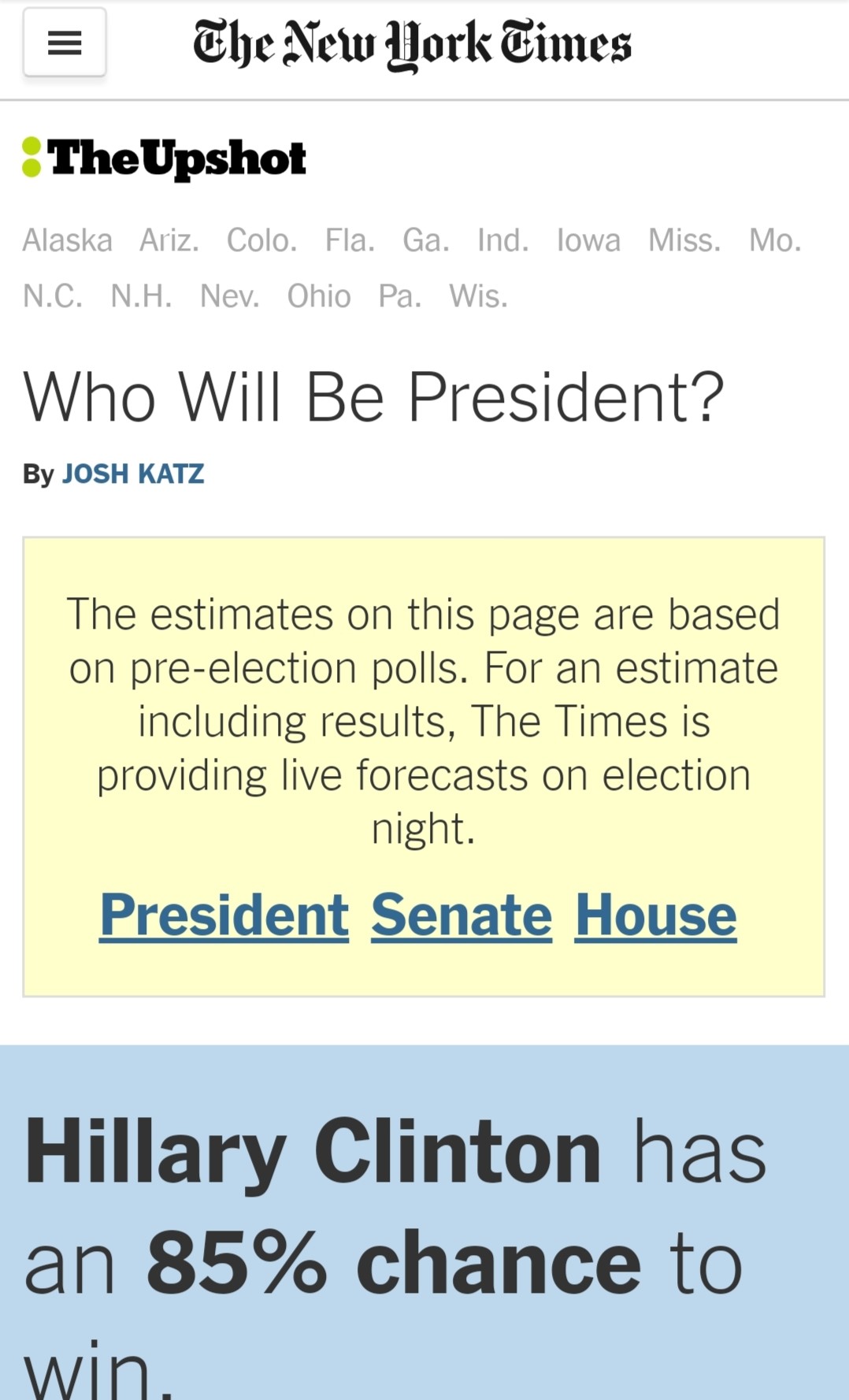 Analytical nerds and make-believe psephologists appearing on liberal media platforms like CNN, NBC and ABC were all predicting some very favourable numbers for Hillary.

Four years later, not much has changed. Today, the pro-Democrats media is publishing reports claiming that Biden is gaining almost an unassailable lead over Trump. 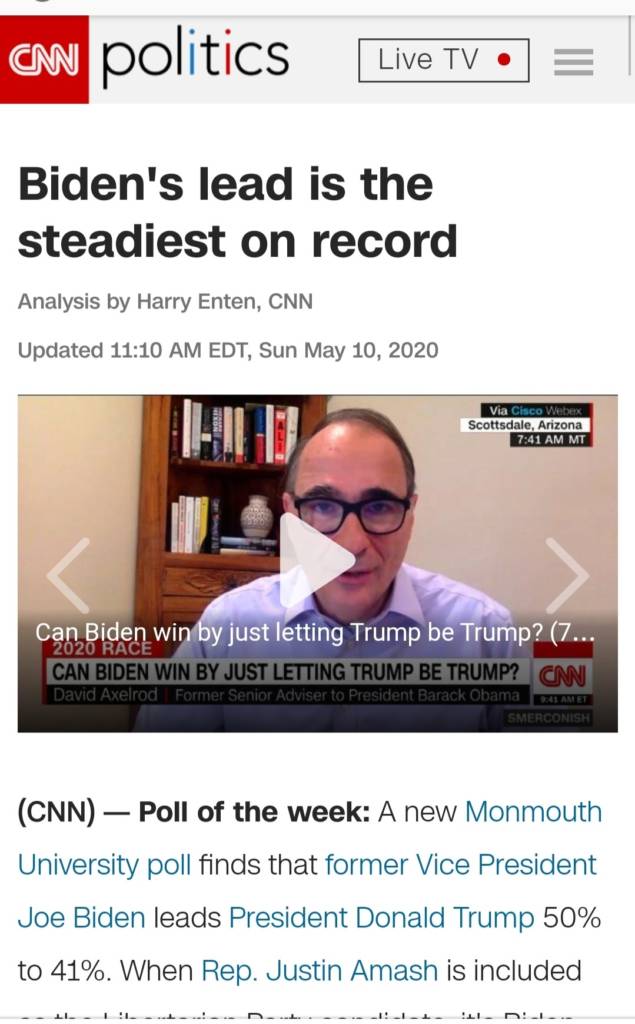 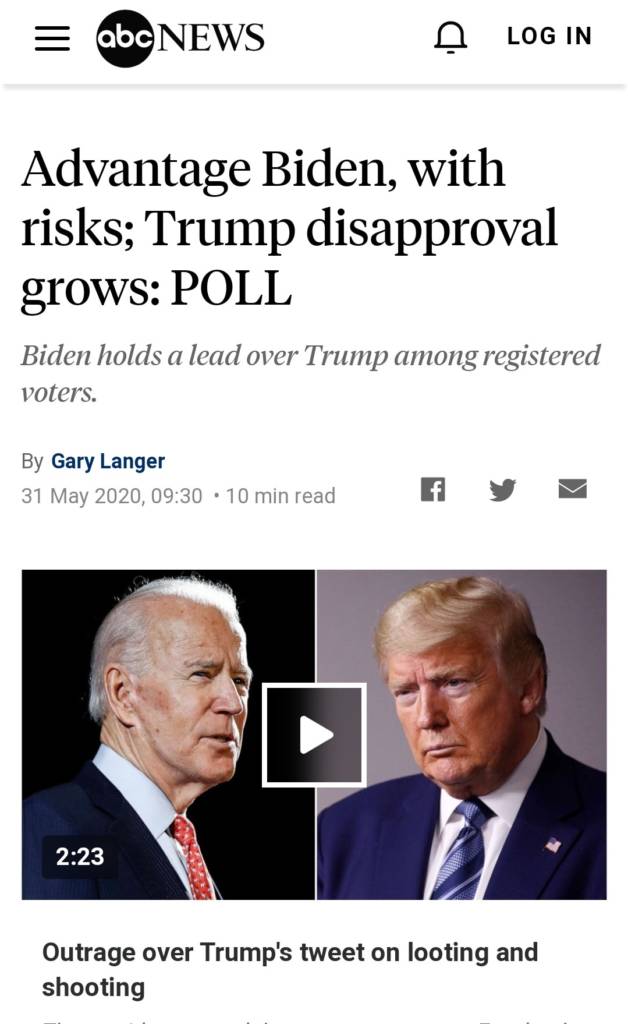 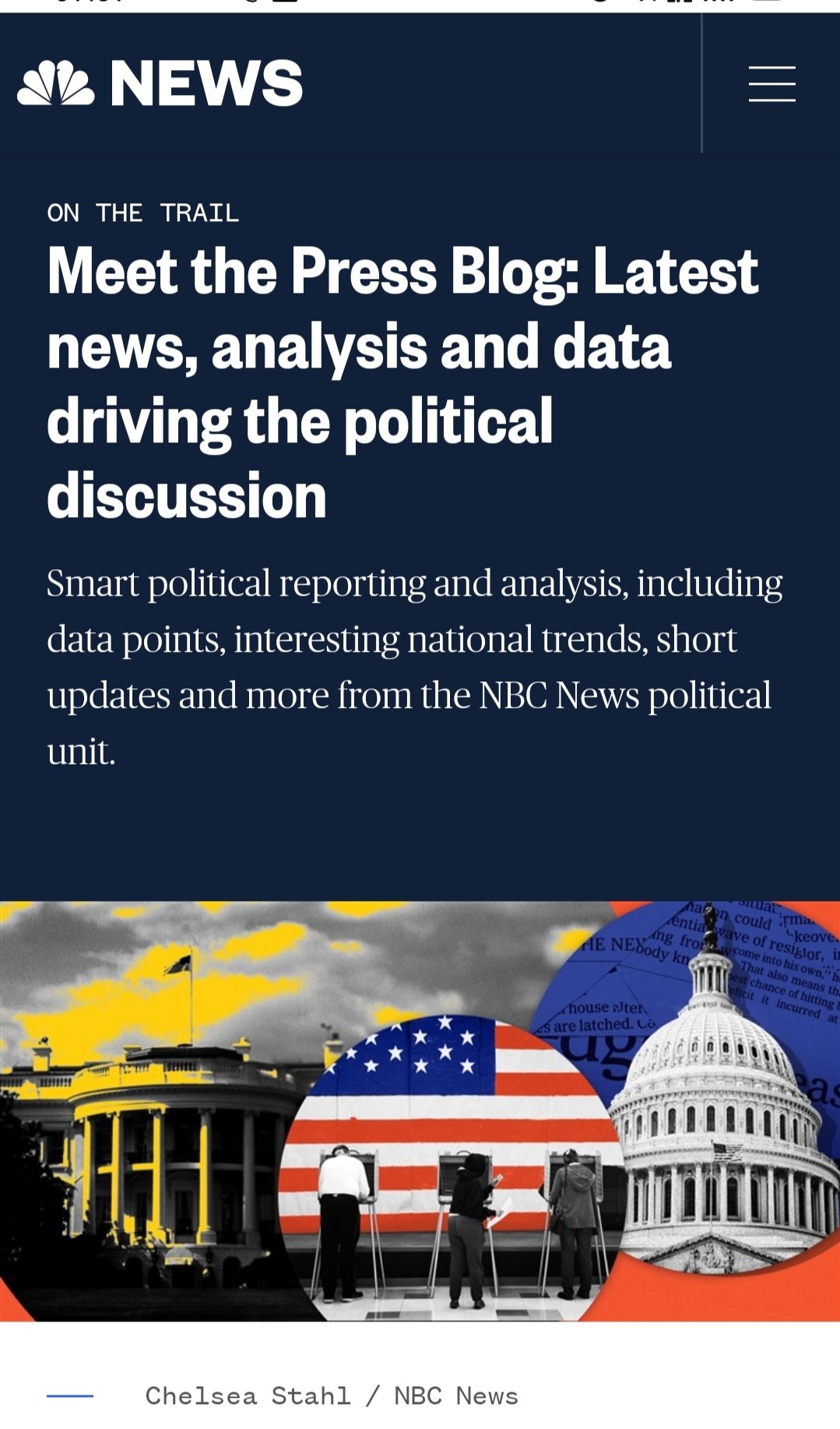 For Democrats, these polls translate into a sense of overconfidence bordering on arrogance. Even before the 2016 Presidential polls, Trump was being dismissed slightly by the democrats. Even the outgoing President Barack Obama kept making fun of Trump before the Presidential polls.

Ultimately when the Presidential poll results were announced, the Democrats were left shell-shocked. Trump had a lesser vote share than Hillary Clinton, but he received a majority in the electoral college. Trump was able to turn things around in swing States like Florida.

The defeat was unacceptable for Democrats and the larger ecosystem. They went through all stages of grief- denial, anger, sadness and acceptance. Trump’s election was followed by protests as the left-liberals couldn’t shed their sense of entitlement. Trump was elected in accordance with a 240-year old American election law.

Hillary had herself spoken passionately of the 240-year old system during the Presidential polls campaign. But when she lost, the anti-Trump lobby went bonkers. There were days of protests. The ultra left-wing protesters proclaimed ‘not our President’ in utter disregard of the electoral system.

Today, Biden is fear-mongering against the prospect of an assertive Trump not stepping down even if he loses. He claims to be absolutely convinced that Trump would refuse to leave even if he loses, but what had happened after the Democrats lost in 2016?

Clinton and many Democrats had not accepted that they lost. Rather new narratives were being weaved. They blamed the Russians, sexism, the unfairness of a 240-year process and the idea of Trump’s post-truth political campaign. In fact, Democrats have a history of not being gracious in defeats.

Recount drama and a smear campaign against Trump right from the day that he assumed office dominated the political narrative in the US.

Due to the absolute domination of Democrats’ perceptions in the American newsrooms, one tends to lose connection with reality. 2016 being the case in point. But if we sideline what the approval ratings have to say, we would realise that things might actually be going Trump’s way.

Trump has done what he promised in 2016. In terms of economy, he has imposed steep tariffs on Steel production creating jobs. Similarly, he had promised energy independence and he has delivered.

Trump has realised that China is a much bigger threat to the US-led rules-based order today than Russia. He thus engaged China in a major trade war after storming to power. Democrats, on the other hand, cannot get over their narrative against Russia.

Resultantly, they are going soft on China at a time when such a stand is unacceptable. Biden might actually be considering softening his anti-China stance and walking a fine line on Beijing.

On a political level, Trump might have faced a bit of a setback during the Coronavirus Pandemic. A national lockdown was not enforced so the number of cases went up. Supplemented by some goof-ups and awkward statements, Trump faced outrage from within the US.

Limited lockdowns also meant an economic slowdown that went against Trump. But things have started changing all over again. The “Blacks Lives Matter” protests have done more harm than good for the Democrats.

As the radical leftist elements hijacked the protests, they soon turned violent. Arson, looting and vandalism that gripped the United States did not really help matters for the Democrats. Trump himself emerged as a ‘law and order’ President. The US has a tendency to tilt towards Conservatism every time there are riots or street violence. The people of the United States of America do not support rioting, no matter who endorses it and for what purpose.

Foreign policy matters in US polls more than any other national polls around the world. Trump has delivered big here too. He has kept his promise to not harm American interests and bring the men back home. He has ensured the withdrawal of troops from Syria and Afghanistan after making a deal with the regional powers to ensure that American interests go unharmed.

The left-liberal ecosystem is brash and loud-mouthed as we can see in the American political system right now. But the ones who vote for Trump remain silent and vote overwhelmingly when things boil down to the ballot.

Trump himself has been relying on this Silent Majority. He tweeted, “THE SILENT MAJORITY IS STRONGER THAN EVER!!!”

For your birthday I thought I would give you a picture of what The COOLEST 😎PRESIDENT EVER looks like. #BarackObama😎 pic.twitter.com/V8Uby7PaOp

‘Mosques in our country are in control of Islamists,’ Netherlands wakes up to the threat of Islamic extremism

‘For de-escalation, PLA must pull back its troops,’ Ajit Doval’s message to China was clear as they agreed to withdraw