The future is not Made in China! India, USA, Japan and Australia are toppling China in Electric Vehicle market

As the world moves away from fossil fuels, it is becoming exceedingly clear that the future of the world is with Electric Vehicles (EV). The EV market is powered entirely by the Lithium-ion batteries (LiBs), and therefore China- a world leader in LiB production enjoys an undisputed advantage.

However, the US, India, Japan and Australia are now looking to dethrone China from the near-monopoly that it enjoys in the LiB market. Driven by the ambitions of cutting reliance on China, the four democratic countries are making individual and collaborative efforts to get rid of Chinese dependence in the LiB market.

The Lithium ion Batteries were originally commercialised by Japanese multinational conglomerate, Sony in the 1990s. The revolutionary batteries promise high-energy density, long recharging cycles, lightweight structure, and relative safety, and can be used across mobiles, laptops and most importantly Electric Vehicles (EV).

Lithium-ion batteries will change the future of global transportation. Currently, the Lithium-ion batteries are costly and make up a major proportion of an Electric Vehicle’s total cost. In a Telsa Model 3, for example, the LiB makes up for one-third of its 35,000 US Dollars price. Electric Vehicles will become commercially viable only when the cost of LiB cuts down.

Given China’s tendency of using its economic heft in order to achieve geopolitical goals, it is not in the interest of the four Indo-Pacific powers informally called the Quad to let China prevail in the EV sector that will come to dominate global transportation.

Presently, China manufactures two-thirds of the world’s Lithium-ion batteries and it is also the biggest producer of Graphite- a key raw material for manufacturing LiB anodes. China also has high concentrations of Lithium but it prefers importing 80 per cent of the White metal so that it can store up for future needs. Beijing is saving its Lithium because it knows that 10 to 15 years down the line, Lithium will be the world’s ‘White Petroleum’.

Within India, there has been a determined attempt to reduce dependence on China when it comes to Lithium-ion batteries. As early as 2018, Anant Geete, then the Union Minister of Heavy Industries and Public Enterprises had announced that India would soon become a manufacturer of the Lithium-ion batteries. Declaring that government accords “top priority” to e-mobility, Geete had said that India would not be dependent on China for key components.

India’s attempts to become self-reliant in LiBs and by necessary implication the EV sector are thwarted by the availability of raw materials. LiBs require five main components- lithium, cobalt, nickel, manganese and natural graphite. The latter three are omnipresent and abundantly available, but lithium and cobalt have scarcity issues.

India plans to make up for paucity for lithium- the most important component in LiB manufacture by tapping into South America’s ‘Lithium Triangle’ that consists of Chile, Bolivia and Argentina. World’s highest lithium reserves are found here, led by Chile. India is in the process of setting up huge Lithium-ion battery plants and the Lithium Triangle will help India in meeting the growing demands. India has also signed an MoU with Bolivia for development and industrial use of LiBs. 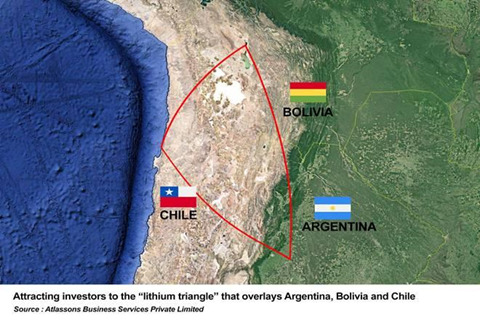 Lithium production and processing is where India is going to rope in its new best friends- Australia and Japan. Japanese companies- Suzuki Motor Corporation, in joint venture with Toshiba and Denso, have already laid plans for the country’s first lithium-battery manufacturing plant in Gujarat.

Moreover, Australia wants to help India in setting up its first Lithium refinery. Australia-based Neometals and India’s Manikaran Power announced a collaboration last year. Neometals has launched a feasibility study for establishing India’s first lithium refinery. This is sigificant as Australia is a major player in lithium reserves of an estimated 2.7 million tonnes. It is also the biggest producer with 51,000 metric tonnes of lithium in 2018.

Between Australia and Japan, themselves, there are plans to forge deep ties in producing lithium batteries. Australian Federal Agency, the Commonwealth Scientific and Industrial Research Organisation (CSIRO) and Japanese chemical manufacturer, Piotrek have partnered to develop lithium batteries in Australia for commercial production over the next five years.

The US also forms part of this informal multilateral partnership to dethrone China’s EV domination. The US currently contributes less than 2 per cent of the global supply of lithium, though the country has 17 per cent of global lithium reserves. The US wants to augment its lithium extraction and bolster the lithium batteries production in the country.

The fact remains that Tesla is the biggest corporate giant in the EV sector. Tesla has two huge factories in California and Nevada. Both these factories are strategically located near the rich lithium reserves in the Salton Sea, CA and Silver Peak, Nevada. The American interests are driven by Tesla, the biggest EV manufacturer and batteries innovator.

If and when the global transportation market goes electric, it is the US led by Tesla which will dominate the world market. Therefore, lithium production and processing are at the core of American strategic interest.

The US too is becoming a part of the global lithium supply chain away from China. State-backed Japan Oil, Gas and Metals National Corp (JOGMEC) has for instance signed a deal with the American Lithium Minerals Inc AMLM.OB to explore a lithium mine in Nevada. Japan itself aspires to become a world leader in LiB production and therefore it wants to hunt for lithium reserves around the world.

China has been powering the EV market by grabbing an extra-ordinary share of lithium production from around the world. But India, Australia, Japan and the US have now come together to move away from Beijing-led LiB supply chains. Together the four democratic powers of the world are dethroning China’s EV monopoly.

“Annihilate the disbelievers,” The Islamic State urges Indian Muslims to be Coronavirus Carriers