Short on luck, India has no Lithium reserves for the electric vehicle age. But it has a plan

The Government of India is reported to be working on a policy for recycling used lithium-ion batteries by offering tax sops to recycling entities while making it compulsory for producers to collect the batteries that achieve end-of-life under the Extended Producer Responsibility norms. Economic Times quoted a senior government official as saying: “It (proposed policy) will have incentives for companies setting up recycling facilities and make it incumbent on producers to collect used batteries”.

Demand for Lithium-ion batteries is going to rise in India as it is hoping to transform its automobile sector into an electric-vehicle driven one by 2030. Electric vehicles are not only eco-friendly, but also save owners from the hassle of fossil fuel consumption of their current vehicles, as EVs use Lithium-ion batteries.

Lithium, the most important metal required for Li-ion batteries used in Electric Vehicles, is a finite resource and it’s demand is set to skyrocket as EVs begin to replace fossil fuel-run vehicles. While only about 3 grams of the light element is used in smartphones, electric vehicle batteries use 10 kilograms of Lithium.

India is perceived as the keenest market for EV producers, and therefore they are constantly working to bring in their electric vehicles at affordable prices in the country. It is projected that 6-7 million electric vehicles will run on Indian roads by 2020, and 30% of India’s entire fleet will be electric by 2030.

The Modi government is especially interested in making India the largest EV market in the world. An analysis by the World Economic Forum and Ola Mobility Institute shows that India is capable of doing so, with more than ten states and union territories working towards building momentum for electric vehicle consumption and manufacturing as well. For example, Uttar Pradesh is targeting two lakh charging stations by 2024. Andhra Pradesh is targeting 100% electrification of buses by 2029.

However, India is not only aiming to be a vigorous consumer market for electric vehicles. The aim is also to be a manufacturing hub for the same. An absolute necessity in the manufacture of electric vehicles is the lithium-ion battery. Lithium, is an extremely light element, hence, using lithium ions made batteries light. The lithium-ion battery technology is today the best performing energy storage technology among batteries.

It was the development of this Li-ion technology that the 2019 Nobel Prize in Chemistry was awarded to John Goodenough, Stanley Whittingham and Akira Yoshino.

Of course, India can manufacture electric vehicles, however, India has no known lithium reserves. And that would serve as a huge impediment, and India would remain dependent on imports, just as it is dependent on fossil fuel imports today.

Chile has the largest lithium reserves in the world, followed by Australia, Argentina, and China. China is the smartest player in the game here, quietly sitting on a formidable amount of the soft, white metal, waiting to extract it for export right when it turns to gold. 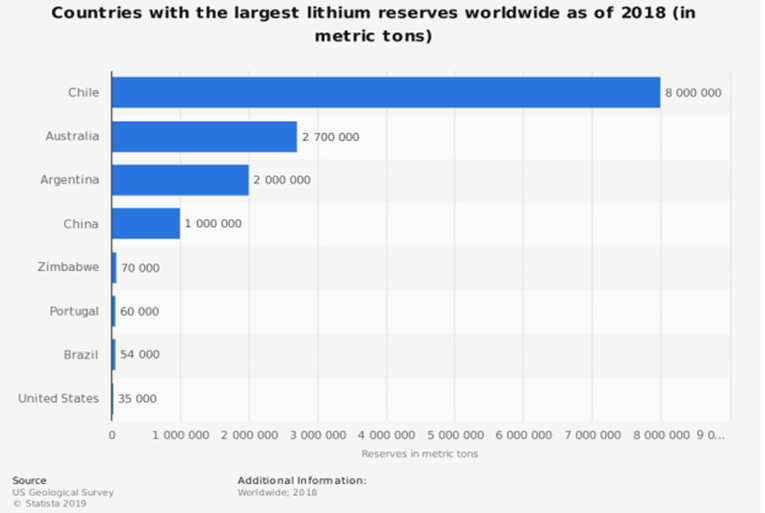 While China is home to the world’s fifth-largest volume of lithium deposits, the country’s electric car industry relies on imports to meet 80% of their needs, according to Fu Xiaofang, an engineer with the Sichuan Bureau of Geology & Mineral Resources.

China, much on expected lines, cites geographical and terrain difficulties to tap on their large lithium reserves. However, the actual reason might be purely an economic one, which will reap immense benefits for the Chinese economy in the long run. China imports large amounts of the metal, especially from Australia.

Being the street-smart nation that it is, China is waiting for these countries at the top of the chart, with large lithium reserves, to begin exhausting their reserves. China will, therefore, look to be the lone exporter of the metal then. It might take some time, but China is being patient on this count.

India though has worked quite a unique alternative to prevent it from being a reckless importer of lithium in the near future. First, early in 2018, India and Bolivia signed a Memorandum of Understanding (MoU) for the development and industrial use of lithium for the production of lithium-ion batteries. As part of the MoU, Bolivia would support supplies of lithium and lithium carbonate to India, as well as joint ventures between the two countries for Li-ion battery production plants in India.

Speaking of lithium battery production in India, Suzuki Motor Corporation, in joint venture with Toshiba and Denso, has already laid plans for the country’s first lithium-battery manufacturing plant in Gujarat, slated to be running by 2020. The plant, with a proposed investment of USD 180 million, will make lithium-ion batteries for use in hybrid cars for the global market, as well as look after the domestic demand.

Exide Industries, in partnership with French energy firm Leclanche, announced plans to manufacture lithium-ion batteries at its newly acquired factory in Gujarat. Bharat Heavy Electronics Limited, known as BHEL and Libcoin, are looking to set up a lithium-ion ‘gigafactory’ in India in the coming years.

In order to prevent hopeless dependence on Lithium imports in the future, India appears to have a plan that involves laying the groundwork for manufacturing Li-ion batteries and recycling used ones so that India’s aspiration to go electric remains economically sustainable.

Mukesh Ambani is set to drive a 5G revolution. And the world wants to know just who they are dealing with

Bad news for Huawei as Canada finally grows a spine, shuts Huawei out for good