Bollywood is an industry that keeps on giving, but mostly in the wrong ways. At a time when it is battling rightful charges of gross nepotism being levelled against many biggies in the industry, reports have now emerged of superstars like Shah Rukh Khan, having close relations with known anti-India activists Tony Ashai, Aneel Mussarat and Rehan Siddiqui.

Ashai, who claims to be a pro-Kashmir activist dedicated to the people of Kashmir, has close links with the Pakistani military establishment, and if pictures doing the rounds on social media are anything to go by, the man also shares a rather warm relations with Pakistan’s Prime Minister – Imran Khan.

While a Kashmiri separatist working towards breaking sovereign Indian territory from the comforts of foreign soil is not new, what is shocking is the visibly warm relations which the likes of Shah Rukh Khan and other ‘stars’ share with anti-India elements abroad. Tony Ashai, for instance, is a Kashmiri who currently lives in the United States and makes a living out of abusing India, and then pocketing projects from the likes of Shah Rukh Khan and his wife, Gauri.

Tony Ashai, also known as Aziz Ashai, studied at University in Buffalo, US, and his education was funded by the terror outfit JKLF, known to be on the payrolls of ISI. Further, the first business venture of Ashai – ‘Ashai Design’ was also funded by JKLF, @TheSkandar tweeted. It is alleged that $450k for the same came from a shell company based in Birmingham in the autumn of 1992. Tony’s son – Bilal Ashai is a member of MSA, which has links to The Muslim Brotherhood. Bilal Ashai, meanwhile, is as rabid an India hater as his father. He recently graduated from Los Angeles, the University of Southern California with a Masters degree.

Incidentally, Tony Ashai is also pictured alongside Pakistan’s Prime Minister, Imran Khan. That should not come as a surprise, since all seekers of ‘freedom’ for Kashmir end up being on the payrolls of the ISI. It is yet to be ascertained whether Shah Rukh Khan is aware of the true credentials of Tony Ashai. The Srinagar-based activist further said that “it’s a well-documented plan” of Tony Ashai to use his Bollywood influence to the detriment of India. He also added that actor Shah Rukh Khan is a patriotic person himself but is perhaps not aware of Tony Ashai’s plans. 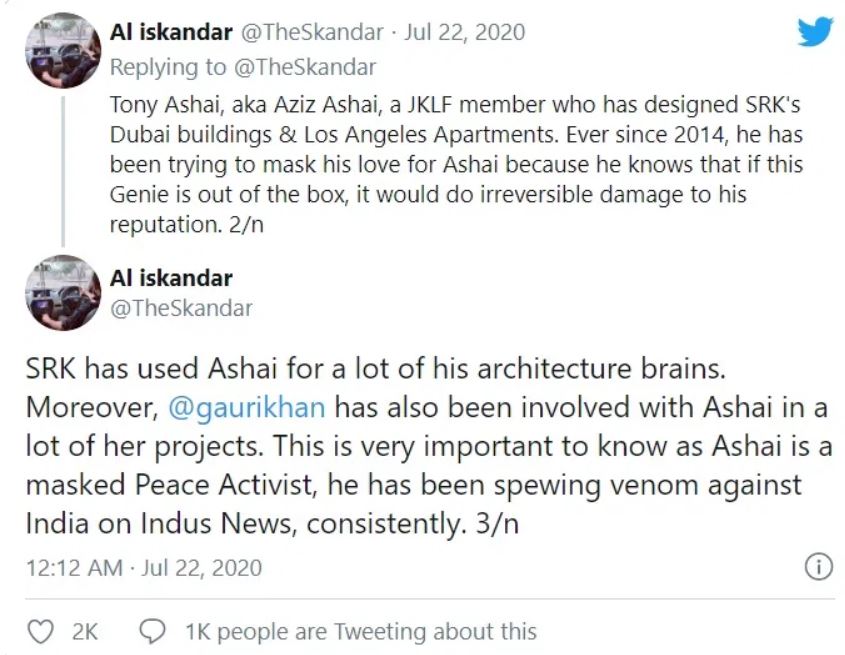 Shah Rukh Khan and Gauri Khan have also been accused of sharing a working relationship with Rehan Siddiqui. He has produced over 400 concerts with many of the biggest stars from South Asia and Bollywood. Siddiqui’s inclinations are clearly anti-India. His motive behind involving Bollywood superstars in his concerts is simple: to market anti-India propaganda easily. Claims suggest that he uses such opportunities to further his India hatred among a large number of audiences who readily buy it in the heat of the moment.

Earlier this month, before the pictures of Bollywood stars against rabid anti-India activists blew up on social media, Dr. Subramaniam Swamy had called for a CBI and ED investigation into the properties of the ‘3 Khans’ of Bollywood in Dubai, and how such properties came to be.

The assets created by these 3 Khan Musketeers in India and abroad especially in Dubai need to be investigated . Who gifted them bunglows and properties there and how they bought it and the cartelisation needs to be investigated by SIT of ED , IT and CBI. Are they above the law?

As a matter of fact, Shah Rukh is not the only star from Bollywood to have a rather friendly relation with Tony Ashai. Pictures of other stars like Anil Kapoor, Sonam Kapoor, Karan Johar, Ranveer Singh, among others with Aneel Mussarat are now doing the rounds on social media. Netizens pointed out how the Pakistani businessman Aneel Mussarat also enjoys good relationships with various Indian celebrities.

Aneel Mussarat is a British born Pakistani businessman and a real estate baron, who allegedly not only shares a close relationship with a multitude of Bollywood personalities but also has an association with the Pakistan PM Imran Khan, the Chief of Army Staff of Pakistan Army – General Bajwa. As a matter of fact, Aneel Mussarat is almost an aide to Imran Khan.

Meanwhile, India’s ruling party, BJP has not remained silent on the startling revelations. Following the shocking disclosures, Vice President of the BJP, Baijayant Panda took to Twitter to say, “Came across shocking threads documenting personal & business links of some Bollywood personalities with certain Pakistanis & NRIs with undeniable track record encouraging violence in J&K, who have verifiable links to ISI & Pak army. I urge patriotic Bollywoodies to renounce them.”

Came across shocking threads documenting personal & business links of some Bollywood personalities with certain Pakistanis & NRIs with undeniable track record encouraging violence in J&K, who have verifiable links to ISI & Pak army. I urge patriotic Bollywoodies to renounce them.

Shah Rukh Khan and other Bollywood stars who have been caught having relations with anti-India elements must now speak up and tell Indians why they have been sharing cozy friendships with individuals who are clearly inclined to break India. It is unimaginable how hard-earned money of Indian audiences spent on watching the films of the likes of Shah Rukh Khan has potentially reached the pockets of Tony Ashai and others, under the garb of ‘projects’. Further, the government must not shy away from initiating investigations into the matter if necessary.

‘Remove China from the global supply chain,’ The US is urging India to strike while the iron is hot

China harasses Vietnamese fishermen with impunity. Not anymore. US has come to its rescue

For a few more bucks, Ola was ready to roast people crisp black