Iran is getting buried under the wrath of the free world, an angry population, and Chinese Yuan

Iran, a Shia majority country that has been in deep trouble ever since the Iranian Revolution of 1979 that overthrew the US-supported Shah Mohammad Reza Pahlavi regime, has made a huge blunder which could mark the beginning of Iran’s fateful end. The Islamic Republic, overawed by Chinese investments worth US $400 billion has decided to spoil its centuries-old ties with India. Tehran was already crippled by American sanctions and the latest move is only going to isolate it even further.

As per recent reports, Tehran has decided to drop India out of a rail line project to connect the strategically located Chabahar Port to Zahedan, along the Iran-Afghan border. The rail project was part of a trilateral agreement between Iran, India and Afghanistan. Originally, India was supposed to finance and construct this project.

In 2016, PM Modi had visited Iran where he had signed the Chabahar agreement with Iran’s President Hassan Rouhani and Afghan President Ghani. As a part of this agreement, a Memorandum of Understanding (MoU) was inked between the Iranian Railways and the Indian Railways Construction Ltd (IRCON). But now Iran says that it will finance the project itself.

The rail project was extremely crucial for both New Delhi and Kabul, as it ensured connectivity between India and the landlocked, war-scarred country of Afghanistan. 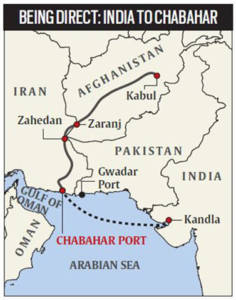 It is not lost on New Delhi either that Tehran has dropped New Delhi from the project in the larger backdrop of a mega Sino-Iranian secret deal. Recently, it was reported that China is going to pump in humongous investments into Iran as a part of comprehensive 25 year-long Sino-Iranian strategic partnership.

Iran is hard-squeezed due to sanctions from the West and Trump’s ‘maximum pressure’ policy on Iran. The country therefore desperately needs investments even if comes at the cost of becoming Beijing’s Client State. The possibility of China using its massive investments to influence Tehran’s India policy cannot be ruled out. There is no other reason why Iran would drop India out of the Chabahar-Zahedan rail project.

What Iran doesn’t realise is that it is pushing itself more trouble by pushing India out of its foreign policy calculus. More Chinese influence is only going to push the West and the US further away from Tehran and this doesn’t bode well for a troubled Iranian economy.

India, on the other hand, was Iran’s only key to escape Trump’s anguish. In fact, the Chabahar port was one of the few projects in Iran that were able to secure a waiver from American sanctions. The US had also waived sanctions from the rail line connecting Chabahar to the Afghanistan border.

Iran badly needs a rapprochement with the West and the US President Donald Trump. New Delhi, not Beijing can calm tempers between the West and Iran. In fact, Iran’s Foreign Minister and career diplomat Mohammad Javad Zarif had himself suggested that India could play a role in defusing tensions between Washington and Tehran.

He had made these remarks during the Raisina Dialogue at Delhi in January this year. Tensions were then running high between Iran and the US, as the American forces had hunted down Iranian General Qaseem Soleimani.

However, if Iran allows Chinese investments to drive India out of the Shia-majority country, there is really no reason why India would want to help the sanctions-hit country.

Allowing India to be replaced completely by China means that Iran’s last opportunity to return towards normalcy stands forfeited. This is going to hurt the country in more ways than the Iranian government can imagine.

Remaining insulated from the globe doesn’t go down well with the younger generations in Iran. The Islamist regime of Iran might encourage hatred against the United States, but Iranians in general and the students and younger generations in particular want to break out of Islamic orthodoxy and adopt progressive ideas. The liberalism of the pre-Iranian Revolution era is something that Iranians envy.

This becomes all the more visible when Muslim students in the Shia-majority country refuse to step on the American and Israeli flags intentionally placed by the Islamist regime at public places and Universities.

Muslim students in Iran refuse to step on the US flag that was intentionally placed there by the regime. Perhaps we should bring them to the US and send Antifa there. Both groups would live happily ever after. pic.twitter.com/vzBnDdgmrL

The Iranian regime therefore wants to depend completely on Beijing but it doesn’t realise that it is only going to agonise the domestic population further.

For starters, Chinese investments are never in the form of aid programmes. They are hard loans with commercial rates. Chinese companies will be given top priority in Iran like any other BRI country and before Iran will know, it will be giving away infrastructure projects to China on 99-year lease arrangements.

Beijing wants to milk whatever remains of the Iranian economy by making it the centrepiece of Xi Jinping’s flagship Belt and Road Initiative (BRI). And there is a lot of oil that China wants to extract out of Iran. Allegedly, the 25 year-long strategic partnership between the two countries will allow Beijing to buy oil from Iran at hefty discounts.

The people of Iran will not welcome increasing Chinese influence with open arms. Xi Jinping’s “debt trap” is the last thing that a sanctions-ridden Iran needs. Moreover, the orthodox sections of Iranian population are bound to feel disillusioned with reports of Uighur Muslim concentration camps in China-occupied Xinjiang.

By pushing India out, Iran is digging its own grave. It is facing the wrath of Saudi Arabia, the United States and the West. Now, it is also pushing away its only friend, India and allowing China to reduce it into a Vassal State. This could very well mark the beginning of Iran’s end.