No Result
View All Result
Newswire
realme rolls out UI 2.0 based on Android 11 for narzo 20 28 mins ago
OYO says no specific relief for Zostel in arbitration as latter claims victory 31 mins ago
AAP continues attack on BJP over Rani Jhansi flyover project 35 mins ago
‘I’m pure Cobra, can kill in one bite’: Mithun 41 mins ago
LS to resume Budget Session from Monday amid Oppn ruckus 41 mins ago
Assam polls: Cong fields fresh faces, 15% women, 5% Muslims 50 mins ago
Next
Prev

Is India going to the South China Sea? China could have another rival as it tries to occupy the crucial trade route

A post-Coronavirus world could probably be the biggest disruptor in the geopolitical equations since the end of Cold War between the US and its allies, and the Soviet and its allies. All major powers are reshaping their regional and international strategies, and New Delhi is no exception. India has grown into a mighty military and economic power over the past few decades and it has interests to safeguard.

The biggest change in India’s foreign and military policy is happening in the South China Sea, as India starts safeguarding its interests in the strategic waterways and weighing its options for entering the maritime region. As a part of this strategic shift, India is drawing closer to the United States, apart from courting Vietnam and the Philippines- Southeast Asian nations that are opposed to Chinese belligerence in the region.

What is at stake:

The South China Sea are international waterways- global commons to be precise, no matter how vocally China may claim the entire maritime region in line with its “Nine dash line” theory. It is a part of the Central Indo-Pacific, a region of New Delhi’s influence and at core of its foreign policy.

At stake is the humungous trade that passes through the region- South China Sea handles 5.3 trillion worth of trade passing through the international waters in the maritime region every year. In fact, South China Sea carries an estimated one-third of global shipping.

As far as New Delhi is concerned, freedom of navigation in the South China Sea is critical as 55 per cent of India’s trade passes through the South China Sea. Therefore, no single country, least of all, a belligerent China can be allowed to take control of the strategic waterways in the maritime region. Any such change in status quo will directly hamper, and in worst-case scenario, jeopardise India’s trade routes.

Recently, MEA spokesperson Anurag Srivastava said, “South China Sea is a part of Global Commons and India has an abiding interest in peace and stability in the region. We firmly stand with the freedom of navigation and overflight and unimpeded lawful commerce in these international waterways, in accordance with international law.”

Shadow of Ladakh standoff on the South China Sea

The recent standoff between India and China at Eastern Ladakh carried a message for New Delhi- India cannot trust China. The fact remains that a democratic, rising India is the biggest nightmare of an autocratic China. Beijing envisions a world order, regional power balance that is controlled by China. India has no reason to believe that Beijing will protect its trade interests, if the former gains control over the whole of South China Sea.

The optics of the Wuhan Summit, Mamallapuram Summit and Xi Jinping’s Ahmedabad visit notwithstanding, India and China remain fierce competitors with long-standing border disputes– a sentiment which will sharpen as India accelerates the exodus of foreign companies from China.

New Delhi’s larger approach towards the Indo-Pacific, of which South China Sea is a part, has been to cooperate closely with the Quad partners- Australia, Japan and the United States, apart from other partners like South Korea.

In recent times, this has translated into logistics pacts with the United States, Australia, Singapore and South Korea. In fact, India is also looking to ink a logistics support agreement with Japan. With these pacts, India is going to create a solid foundation for surrounding and entering the South China Sea from different sides.

China’s aggression in Ladakh and tussles with the US and Australia has brought the Quad closer than ever before. And now the Quad partners get to encourage New Delhi to play a bigger role in the Indo-Pacific. The Indian Navy, being a formidable force, is expected to safeguard India’s trading interests and routes as a part of the larger maritime security strategy.

There is no reason why India wouldn’t want to conduct freedom of navigation exercises in the South China Sea, just like the US has been doing for quite some time. Even Australia has been conducting such exercises. Eventually, the entire Quad could enter the strategic waterways and conduct joint navigation exercises and overflight patrols.

Cooperation with Southeast nations- Vietnam, the Philippines and Indonesia

The ten ASEAN (Association of South East Asian Nations) members have started standing up to Chinese belligerence and bullying in the strategic waterways.

One of the chinks in India’s armour is that its traditional sphere of influence is limited to the North-western approaches of the Strait of Malacca- a narrow chokepoint that sits at the intersection of Indian and Pacific Oceans, and is therefore crucial to New Delhi’s Indo-Pacific strategy.

The Eastern side of this strategically located chokepoint thus remains a blind spot for India, and the Modi government cannot gain access to this region unless it starts cooperating in the defence sector with the regional players. This is the only route from where the Indian Navy warships can enter the South China Sea. 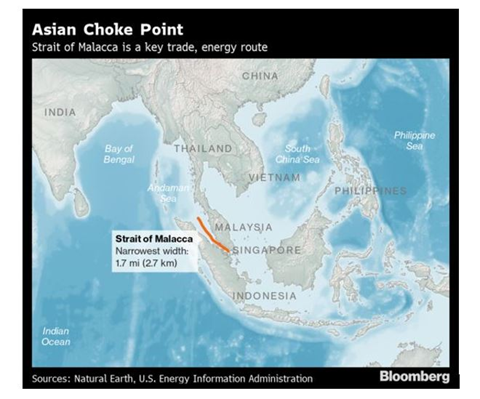 And New Delhi has come out supporting the regional powers without making much noise.

In the midst of Chinese bullying in the South China Sea, the Ministry of External Affairs (MEA) spokesperson Anurag Srivastava said, “India also believes that any differences be resolved peacefully by respecting the legal and diplomatic processes and without resorting to threat or use of force.”

Therefore, the MEA has stood for the regional players being bullied by China, and New Delhi has also interacted with them. Recently, Prime Minister Modi had a telephonic conversation with the Philippines President Rodrigo Duterte.

According to the Prime Minister’s Office, “The leaders shared their satisfaction at the progress seen in recent years in all aspects of the bilateral relationship, including defence cooperation.  Prime Minister emphasised that India sees the Philippines as a vital partner in the Indo-Pacific Region.”

For India to assert that partnership in the “Indo-Pacific Region” with a South China Sea stakeholder, of course, means that India wants to play a bigger role in the maritime region.

Meanwhile, Eurasian Times has reported that Hanoi which already holds the current chair of ASEAN has been bolstered by support from India, the US and Australia. Vietnam has defied the Chinese fishing ban in the South China Sea, which allows India to draw these stakeholders closer as fishing is a major source of livelihood and food security for these countries facing hostility from Beijing.

And India has cobbled a close maritime strategy with Indonesia anyway which focuses on a shared vision of a free, open, transparent, rules-based and peaceful Indo-Pacific Region. New Delhi is also developing its maiden deep sea port in Indonesia which will give it a firm grip on the Strait of Malacca and the Indonesian Straits.

Logistics pacts with like-minded countries like the US and Australia, combined with deep defence and maritime cooperation with Vietnam, Indonesia and the Philippines show that India is weighing its options in South China Sea.

‘Who will answer for 26 Jan violence?’ Girl stands up and puts Tikait in a fix as he tries to make her shut up