Newswire
UP: Congress leaders taken into custody during protest 30 mins ago
HK’s Lam denies being kept in dark over security law 34 mins ago
Happy Indian cricket got Dhoni because he is unbelievable: Ganguly 34 mins ago
Younis is someone who can never show knife to anyone: Inzamam 40 mins ago
Business resumption index falls for 1st time in post lockdown phase 45 mins ago
B’luru civic body to add more ambulances amid pandemic 46 mins ago
Next
Prev

Dear Rahul Gandhi, read some economics because Moneylending is not a bane, it’s the backbone of any economy

This is how Congress ruined Indian banks

A few days ago, Rahul Gandhi said that the government should act like a ‘sahukar’ and dole out cash directly in the hands of the people. “I urge the government, do give loans to people, but not act like a ‘sahukar‘to her children. Mother India should give money directly to her children as they need money now,” said Gandhi while interacting with journalists of regional media through video conferencing.

In the conference, Rahul Gandhi repeatedly insinuated that the moneylending as some abhorring activity and said that the government is acting like a moneylender. The apathy of India’s political and intellectual class towards moneylending has kept India poor for decades.

Moneylending, or what is known as Sahukari in traditional Indian system and ‘credit’ in modern banking terminology, is the most essential factor for any economy. Today the US is largest economy of the world because it had the world’s largest financial sector, which comprises its mighty banks and stock exchanges. 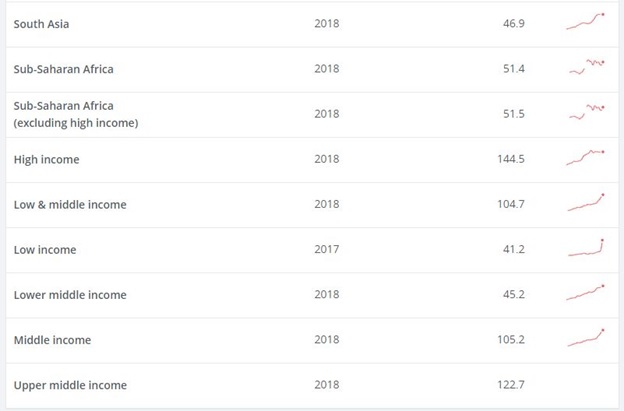 The economic growth or economic development of any country is directly proportional to the robustness of its financial system and its credit to GDP ratio. In other words, the countries which promote moneylending are among the richest countries of the world. As one can see in the attached picture above, the richer or high income countries have higher credit to GDP ratio.

But, In India, this activity has been vilified right from the independence, when Nehru laid out the foundations of country’s political economy, and went with socialist system.

The signs became vilification visible in the late 50s itself, and what better to explain this than Mother India? India’s first submission for the Foreign Language section of Academy Awards, Mehboob Khan’s Mother India, had begun portraying stereotypes in the worst way possible, including a blood sucking, lecherous moneylender, who went by the name Sukhi Lala.

After that came the era of Salim-Javed, the much celebrated scriptwriter duo with clear-cut Communist credentials, depicted moneylenders in bad light in every script.

The vilification of moneylending has kept the India’s farmers and poor people away from banks and more than one third of country’s total population did not have a bank account until Modi government started opening Jan Dhan accounts.

The lack of moneylending or credit is the reason behind underdevelopment of India’s banking sector, which impacts economic activity and economic growth. As Economic Survey correctly observed, India should have at least 6 banks in global top 100 while we have only one. “If Indian banks were proportionately large in relation to the size of the Indian economy, we should have at least six banks in the global top 100,” reads the Survey.

“India’s banks are disproportionately small, compared to the size of its economy. In 2019, when Indian economy is the fifth largest in the world, our highest ranked bank—State Bank of India— is a lowly 55th in the world and is the only bank to be ranked in the Global top 100,” the Survey observed.

Even smaller countries like Denmark, Finland, and Austria, which are a fraction of the Indian economy, have more banks in top 100. Unless the apathy of the political and intellectual class towards moneylending goes away, Indian economy could not achieve sustainable double digit economic growth.

‘For de-escalation, PLA must pull back its troops,’ Ajit Doval’s message to China was clear as they agreed to withdraw

Trump will lose the Presidential election in 2020, just like he lost in 2016

‘Mosques in our country are in control of Islamists,’ Netherlands wakes up to the threat of Islamic extremism

Germany and other European countries will be forced to ban Huawei. US and UK are making sure of it